EDGEWATER — Richard Younker, a 76-year-old man diagnosed with Parkinson's disease, forcefully thrusted his legs into the air one at a time as he marched across the floor of the Edgewater Fitness Center.

His trainer, Eric Johnson of the Rock Steady Boxing program, walked alongside him, counting off the steps in a bellowing, though encouraging, voice.

As Younker made his way across the sunlit room, he watched his reflection in the wall of mirrors opposite him. Closer to the mirrors, he took a slight pause to look himself in the eyes, then turned around, said "One! Two!" —  and then headed back toward his starting point.

Twice a week, Johnson and 12-15 other Parkinson's patients meet to literally battle their diagnosis by slipping on boxing gloves and doing exercises like hitting a bag or practicing boxing footwork.

Johnson and Jim Kroeger, co-founder of the Chicago branch of the boxing program and a Parkinson's patient himself, got certified in the program's curriculum in March and started the program at 1106 W. Bryn Mawr Ave. in May.

The program is split into two groups: those who still have a degree of autonomy and can still take care of themselves, and those in more advanced stages of the disease who require a caregiver or some sort of assistance.

Parkinson's disease is a neurodegenerative brain disorder that causes a person's brain to slowly stop transmitting dopamine — a hormone in the body associated with motor and cognitive functioning — over time.

Complications from the loss of bodily control or decreased physical regulation over the body can lead to death, according to the National Parkinson Foundation.

According to the Parkinson's Disease Foundation, about one million Americans live with the disease (10 million worldwide), and as many as 60,000 people are diagnosed each year.

Rock Steady Boxing focuses on using vocal and physical training to keep motor skills in top-notch condition, as well as provide a supportive place for patients to socialize.

Though boxing has been associated with creating brain disease or injuries in the past — including in famed boxer Muhammad Ali, who has Parkinson's — Johnson said the no-contact program greatly minimizes risk of injury. It also opens the class to those who may have thought boxing was not in their wheelhouse, like older women.

"A lot of times the concept of boxing, one, can be intimidating — let alone to people who have Parkinson's disease," Johnson said. "And people have often heard boxing can actually cause Parkinson's — the impact and the head trauma. People think of Muhammad Ali and [think] it's too dangerous for them, but the big key factor is the non-contact boxing. But then once they come and see the class, it really opens their eyes to see how beneficial these exercises are." 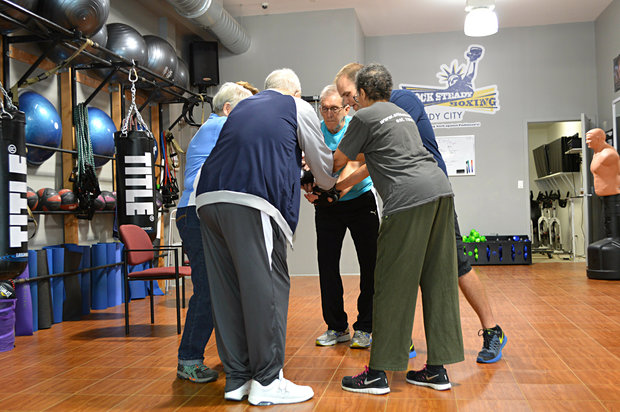 Participants in the advanced stages of the disease usually need to bring a caregiver to assist them during the class as they work on exaggerated stretching and movements. [DNAinfo/Linze Rice]

Younker, a 76-year-old writer and photographer, said he comes to the advanced session at the behest of his girlfriend, Judy Kiehm, who urged him to go after seeing a flier and demonstration of the class.

Younker said he was familiar with the disease because he'd watched his own father be swept away by Parkinson's many years ago.

He also said he's come to enjoy the class because it helps him to socialize and get out more — and keeps his joke-telling skills sharp.

Younker and Kiehm have been together for the past 18 years, well beyond when Younker was diagnosed about seven or eight years ago. His diagnosis has been "overwhelming" for her, too, she said.

And though it's been a rough road at times, the boxing class with Younker has been "empowering," she said. "You're literally fighting back against the disease."

It's helped the gentle, talkative Younker come back out of his shell and give him the boost of confidence he needs to keep a positive attitude.

On Sunday, the couple will be participating in Moving Day in Lincoln Park, when attendees will walk a 1.6-mile course along the lakefront and then exercise in the Movement Pavilion. 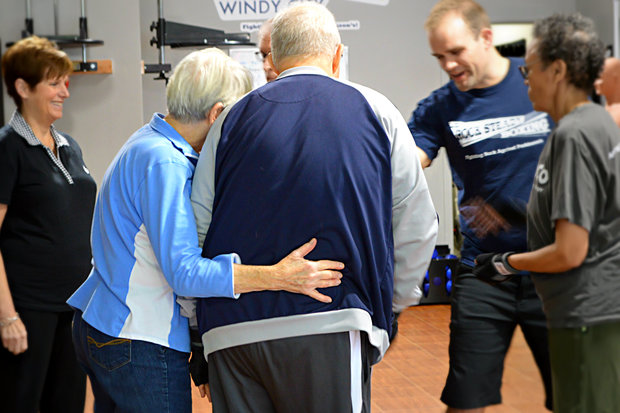 Judy Kiehm, Richard Younker's girlfriend and caregiver, shares a tender moment with her partner at the end of an early afternoon session. [DNAinfo/Linze Rice]

Johnson, who connected with Kroeger after learning of each other from their mothers — who both worked at the same hospital in Madison, Wisconsin — said participants continually inspire him by "taking on their challenges at full force" while building camaraderie.

"They really stick together, the fight through it all. They inspire each other, they root each other on in class, they joke around all the time. It's amazing."

As Younker's session ended, the group gathered in a circle, placed their hands atop one another's and on the count of three, shouted "Rock Steady Boxing!" before trickling out. 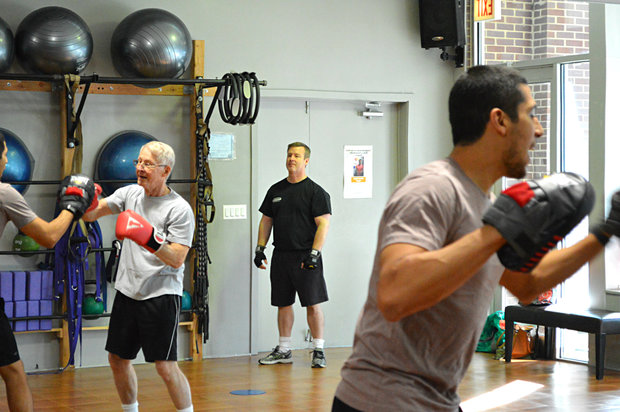 Co-founder Jim Kroeger, who was also diagnosed with Parkinson's, takes a break from exercising to watch an afternoon class. [DNAinfo/Linze Rice]

A new class arrived and Johnson greeted them with a vocal exercise and ice-breaker: Give the class your nickname for the day, and say your favorite type of cake.

"Today, you can call me Coach Dadio Johnson, and my favorite cake? German chocolate cake from Taste of Heaven," Johnson said.

Shortly after, the group slid on boxing gloves and began to shuffle around the room at four timed stations: punching in combinations, hitting a bag, side-stepping at an upbeat pace around the room.

It's exactly what Kroeger was aiming for with Rock Steady, which helped him overcome his own Parkinson's diagnosis, he said. The self-described "tough guy" had been heavily invested in body building, weightlifting and owned several gyms throughout the city, before he was officially diagnosed in 2013.

Going forward, he wants to expand his reach in the city — hopefully opening a more central location in Ravenswood or Lincoln Park that more Chicagoans could use.

Until then, Kroeger and Johnson keep fighting the good fight in Edgewater.

"A lot of people that have been taking the classes so far have seen those physical and emotional benefits of the program," Johnsons said. "I had one guy who said, 'I didn't come here to make friends,' but then he said, 'You can't help but get to know and really love the people in the class.' We try to make it as much a family as we can." 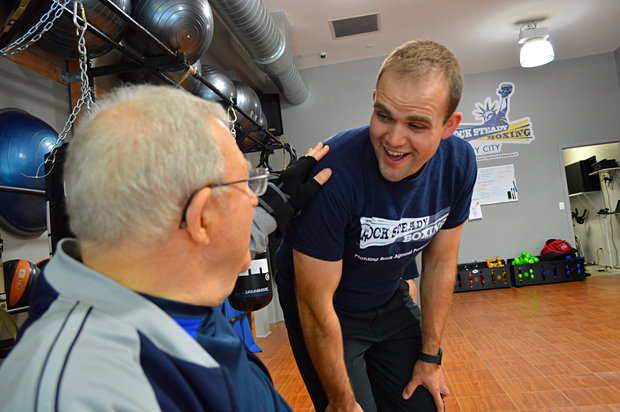