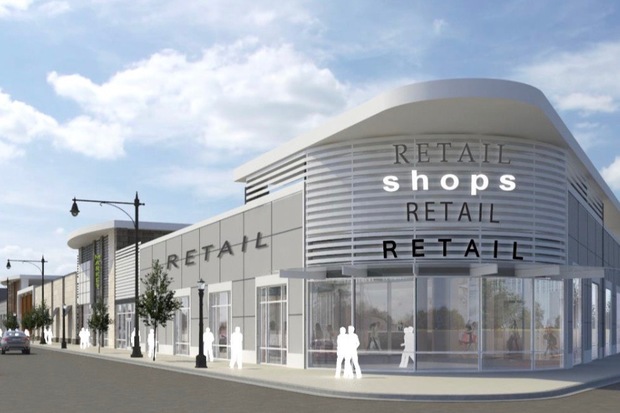 PORTAGE PARK — The huge empty Bank of America branch at the heart of the Six Corners Shopping District will be replaced by a massive glass-enclosed shopping center with 12 stores and a 275-spot rooftop parking lot, according to plans from the developer.

The shopping center at 4747 W. Irving Park Road would include a 26,500-square-foot space that is being marketed to grocery stores, according to the renderings by Clark Street Development.

The one-story development is not asking for any money from the Portage Park Tax Increment Financing District, but does require a zoning change because of the size of the building and the site, said Owen Brugh, chief of staff to Ald. John Arena (45th). 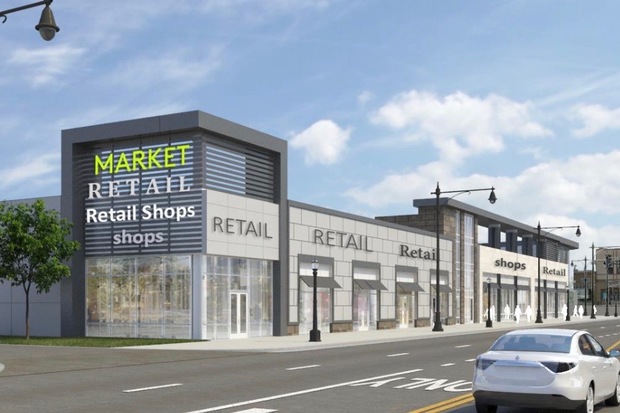 The alderman would need to OK any zoning change for the all-commercial development. He believes the project would be an "exciting addition to Six Corners," which has been in the midst of a rebirth with nearly two dozen shops and restaurants opening recently, Brugh said.

Heather Cherone breaks down the proposal and what's next:

The project with 113,000 square feet for shops is expected to be presented to nearby residents in the next couple of months after a "hiccup" involving a public alley running through the site is resolved, Brugh said.

The LA Fitness gym across Milwaukee Avenue also has a rooftop parking lot, as would the proposed development, which also needs special permission from the Chicago City Council. 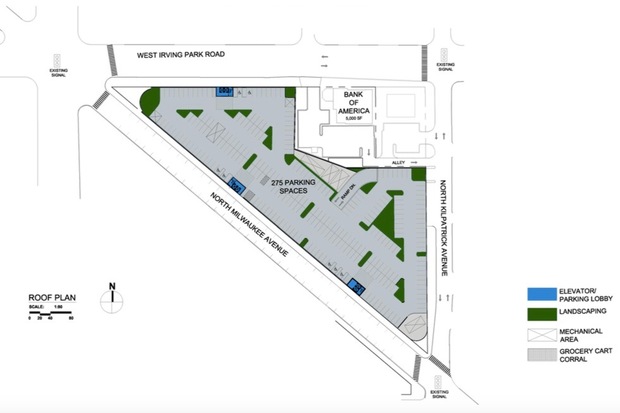 Renderings do not include plans for the one-acre parking lot in the 3900 block of Milwaukee Avenue also owned by Clark Street Development.

Neither Peter Eisenberg, a principal with Clark Street, or a spokesman for the firm returned calls or email messages Wednesday.

The company paid more than $10 million in June 2014 for the 140,000-square-foot triangular property at the corner of Milwaukee and Cicero avenues and Irving Park Road as well as a one-acre parking lot in the 3900 block of North Milwaukee Avenue, across the street from the triangular building set to be torn down, according to public records.

The Bank of America branch closed nearly a year ago and a smaller branch opened just east of the six-point intersection through which 70,000 cars flow every day, according to city traffic data.

The master plan recommended a four- or five-story building on the site, to match the height of the Sears store across Irving Park and the Klee Building, which is diagonally across Cicero Avenue.

There should be 24,000 square feet of commercial space on the ground floor of that building and between 50 and 75 residential units on the floors above, according to the master plan.

In addition, the development should include a 7,300-square-foot courtyard to allow a public gathering area as well as new streets to chop the massive city blocks into more walkable chunks, according to the master plan.

The project will not include condominiums or apartments nor any new streets or a public plaza, according to the renderings.

Clark Street Development has a development underway in Oak Park that includes both apartments and shops.

According to an assessment done as part of the master plan, Northwest Side residents spend $141 million on shopping and eating outside the area. That situation creates a significant "retail gap" and an opportunity for new shops and restaurants to claim that business, according to the report.

Brugh credited that assessment with attracting Clark Street Development to Six Corners by identifying an untapped market for retail sales. 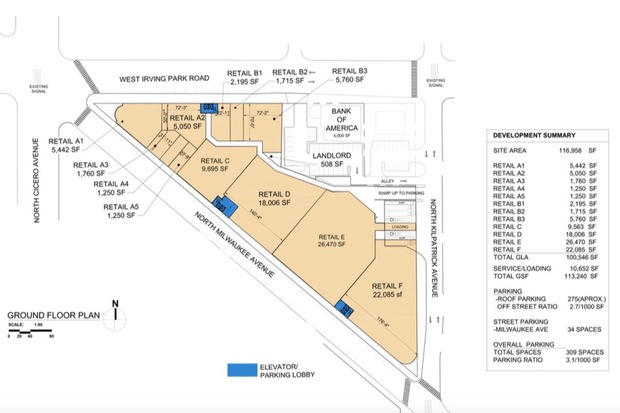