By Linze Rice |&nbspOctober 6, 2015 6:15am | Updated on October 6, 2015 9:12am
@linzerice
Twitter Facebook Email More
Brielle Siskin, 25, is known by some students as "the peace queen" and runs the school's Peace Room and restorative justice programming for students and staff.
View Full Caption
DNAinfo/Linze Rice

ROGERS PARK — When Aryanna Boatman talks, she keeps her hands folded in her lap and speaks softly, but with confidence.

The 17-year-old senior at Sullivan High School in Rogers Park sits in a powdered blue room where the walls are bespeckled with positive affirmations and there are translations of "peace" in several languages.

It's the Peace Room. A "safe place," Boatman says.

Linze Rice explains what happens in the Peace Room:

It's the place where students, and at times staff, come when they need to process an event, emotion or situation — like Boatman did last year when she nearly hit her former friend over the head with a chair during an argument at school.

"I've learned that you just have to let some things go," Boatman said. "Because if you got all that stuff bottled up inside of you, you're not really gonna be focused on class. You'll be focused on the problems or issues, which is going to reflect on your grades."

Now Boatman, a Roseland resident who travels to the Rogers Park school at 6631 N. Bosworth Ave. and aims to become a nurse practitioner, says she encourages other students to choose peaceful, not violent, solutions to problems.

So what is the Peace Room?

School officials say students may nominate themselves or someone else to use the Peace Room. Facilitators help groups, pairs and individuals work through personal problems, build trust and gain leadership skills.

Behind the push for tranquility at Sullivan is the manager of the Peace Room, Brielle Siskin, a 25-year-old graduate of the University of Michigan whose education focused on urban, community and African-American studies.

Around Sullivan, she's known by some as "Peace Queen." 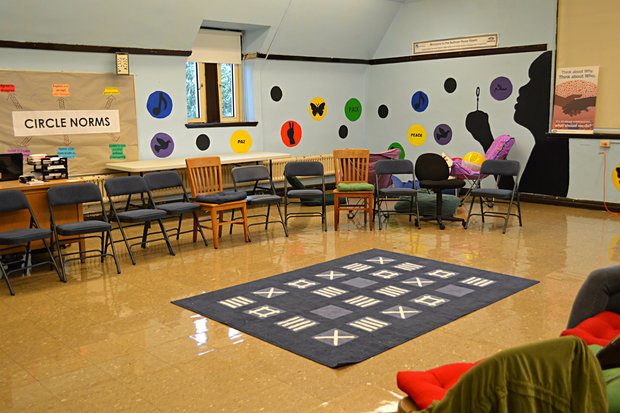 The peace room is large enough groups of at least 15 can gather to work on problems or conflict resolution, as well as team-building. [DNAinfo/Linze Rice]

Siskin said when her third year is up at Sullivan next spring, she knows it will be tough to move on: she's developed deep emotional bonds with the students and staff.

It's just in her nature, she says.

"I guess I always knew I'd be a social worker," Siskin said with a laugh. When she was younger, she had written a letter addressed to herself five years in the future. When she reopened her letter, she saw that her engrained sense of helping others hadn't waned, she said.

Before working with Umoja in Chicago Public Schools, Siskin taught a class to male inmates at a Michigan jail, then went on to help recently released inmates readjust to normal life.

It was during this time she said she heard over and over again from the former criminals she counseled who told her that they wished they had a mentor earlier in life to give them the emotional and social support they needed to succeed. If they had, perhaps things may have been different, they said.

Those conversations stuck with Siskin, and motivate her to keep fighting for students' emotional well-being, she said.

"I get a lot of personal satisfaction out of my job," she said. "It's definitely stressful, it's draining ... A lot of times it's small successes, but that's kind of what really keeps me going."

According to data provided by Siskin, there were 804 voluntary visits from return users in the peace room in the 2014-15 school year, with 369 visiting only once.

That same year, there were 75 suspensions, according to data provided by Sullivan Principal Chad Adams.

The school’s enrollment dropped from 812 to 567 students in that time, but it still represents a big decline.

And less than a third of “misconduct” incidents resulted in students being removed from school last year, a big drop from previous years.

In 2012, students and faculty were still recovering from a brutal 2011 classroom brawl between two female students when in December at least 15 students were removed from the school after fights broke out between warring gang factions inside Sullivan. 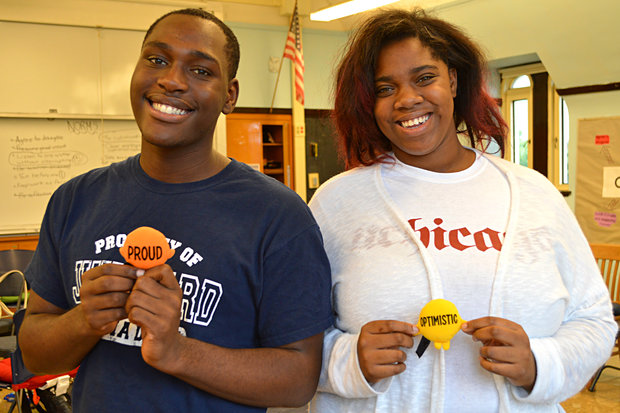 Seniors Jonathan Binion and Aryanna Boatman, both 17, said the peace room has helped them work through major problems while at Sullivan and become more true to themselves. [DNAinfo/Linze Rice]

Siskin and Adams say they believe the peace room has become an essential tool in the way the school handles behavior and discipline issues.

A recent report found trends among CPS suspension data that the district unevenly doled out punishments to students with a history of abuse or neglect, among other factors.

"A lot of safe people you can talk to"

Adams said lessons taught by Siskin through a restorative justice lens "embodies everything we do at Sullivan."

At the end of the day, he said it was "just as important" to him his students graduate learning about both algebra and emotional health.

"That they can resolve conflicts peacefully both will help them in college, career and life," Adams said.

For Jonathan Binion, a 17-year-old Sullivan senior set on attending Juilliard in New York for acting, the impact of the program has been strong. For him, the peace room has become a place of safety and respite, he said.

He was first introduced to the room at a friend's suggestion after getting in a heated lunch room shouting match with another friend. Now, he said he's peacefully resolved conflicts among family members at home using tactics he learned through Siskin and her team.

He said Siskin taught he and his friend to channel empathy by thinking about what the other may have experienced just hours before getting into the argument — a turning point in Binion's life he says when he realized petty fights like his are often just covering for a deeper emotional wound.

Now, he too encourages other students to seek the peace room.

"I'm glad that I didn't let the friendship end over something petty," Binion said. "Give the peace room a chance. Even if it's not the peace room, there's other adults in this building that Brielle has trained to facilitate peace circles, so it's a lot of safe people you can talk to. It's a great chance if you do come." 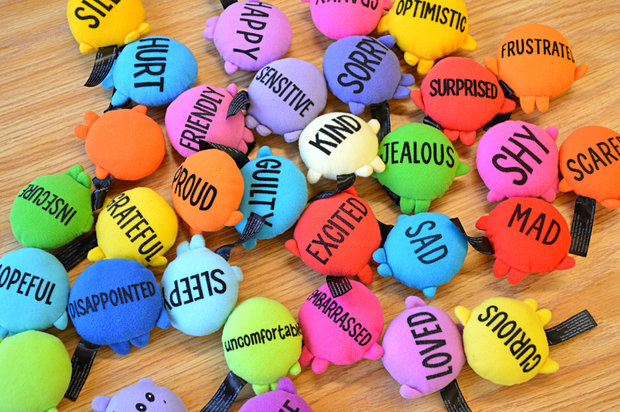 Peace room visitors can use these plush emotion dolls to find the words to describe feelings they may not be able to describe themselves. [DNAinfo/Linze Rice]