DOWNTOWN — Mrs. O'Leary was milking her cow when it kicked over a lantern, starting a fire that would overtake all of Chicago, 146 years ago.

Or so the legend goes.

The fire killed an estimated 300 people, left thousands homeless and destroyed 3.3 square miles of the city. Of course there's a bit more to the Great Chicago Fire than a clumsy cow, and Mrs. O'Leary isn't to blame at all.

Here are five things you probably didn't know about the Great Chicago Fire that burned from Oct. 8-10, 1871: 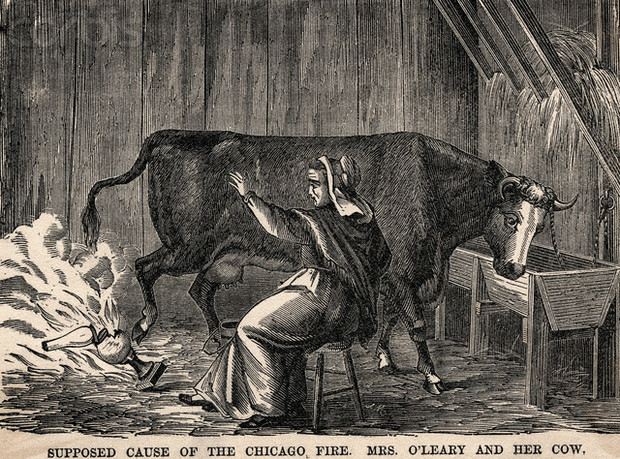 Legend holds that Catherine O'Leary was milking her cow one night when it knocked a lantern over and set the family's farm ablaze, starting the Great Fire.

Yeah, not so much. O'Leary denied that she played a role in the fire, and the evidence seems to suggest she wasn't lying: "You don't milk cows in the evening," as Chicago historian Tim Samuelson pointed out.

Nobody is sure what started the fire, but Samuelson said there are a variety of possibilities — and suspects. A family that lived nearby is rumored to have broken into the barn to steal milk when they were hosting a party.

"It's possible that they could have had a lantern or something for light and set it afire," Samuelson said. "Could be someone was smoking a pipe. I believe even one of the O'Learys thought that it was internal combustion from hay in the barn, which is actually something that is possible to happen."

Either way, it almost certainly wasn't Mrs. O'Leary. She was officially exonerated by the Chicago Committee on Police and Fire in 1997, but the legend persists.

Mrs. O'Leary just can't catch a break. This campfire song places the blame for the fire on her and her cow.

4. Why Do People Blame the O'Learys?

It's difficult to determine who started the "Mrs. O'Leary and her cow did it" story, but a Chicago journalist named Mike Ahern claimed he did it.

Ahern, who worked for the now defunct Chicago Republican, would claim to have fabricated the story decades after the fire. His story changed throughout the years, though, making it difficult — if not impossible — to determine what really happened and who made up the Mrs. O'Leary tale.

"It was not started by a cow kicking over a lamp while Mrs. O'Leary was milking the animals," he wrote for the Chicago Tribune in 1911 as part of an anniversary story for the fire.

There had been a social gathering in the neighborhood on the night of the fire, Ahern recounted for the Tribune. Two partygoers snuck into the O'Leary's shed to steal milk. Thinking they heard someone coming, they ran out, knocking over their lamp and starting the fire, Ahern said.

PHOTOS: The Great Chicago Fire Raged Through Chicago 146 Years Ago. These Photos Show the Aftermath.

At various points Ahern claimed he "cooked [the O'Leary story] up with some colleagues" or blamed others for creating the urban legend, while other sources said other people made up the story, Samuelson said.

"As somebody who was one of the last survivors of reporters who covered the fire, he was kind of the go-to guy for whenever there was an anniversary [or] discussions of the history of the fire," Samuelson said. "He was perhaps looking for one last bit of fame connected to the fire by saying he made up the story.

"The fact that this story kind of shifts so much certainly calls into question the reliability of his recollection." 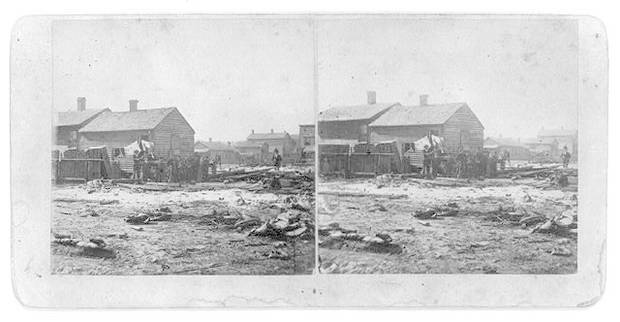 The O'Learys' home survived the Great Chicago Fire, which supposedly started in their barn. [Library of Congress]

3. But You Should Still Know Who The O'Learys Are

The O'Learys would have a place in the city's history even if not for the Great Chicago Fire.

Catherine O'Leary's son, James "Big Jim," was a "major figure in gambling operations on the South Side" who helped pave the way for the rise of infamous gangster Al Capone.

Big Jim had political connections that ensured his illegal gambling hall at 4185 S. Halsted St. was rarely raided, Samuelson said. And to keep the cops out when they did raid, he had large metal doors made and filled a hollow space between them with pepper. When the cops tried to break it down, chili powder blew in their faces.

"There is a story where Colosimo's told to be at his restaurant at a certain time [for a shipment of illegal liquor] ... and then people kill him," Samuelson said. "And the person who called Colosimo and said to be there was Big Jim O'Leary."

That touched off "cause-and-effect gang warfare that was the beginning of the bootleg-era gang wars," Samuelson said. Colosimo was succeeded by New Yorker Johnny Torrio, who later fled Chicago after being shot and attacked when entering his home, Samuelson said.

Torrio was succeeded by his young lieutenant, Al Capone. 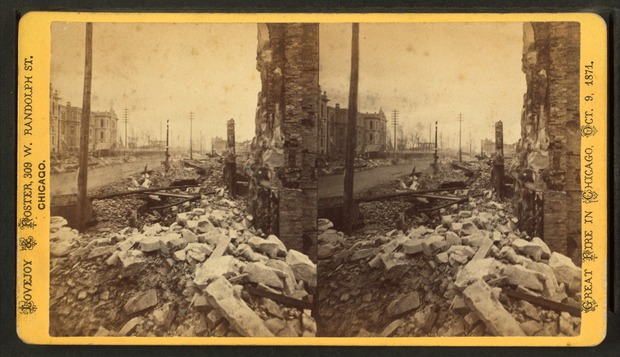 2. No, the Whole City Didn't Burn Down

More than a few people seem to think the Great Fire burned all of Chicago down. It is sometimes suggested the only building that survived was the Water Tower.

That wasn't quite the case, Samuelson said: The fire did do a great deal of damage, spreading from the O'Leary barn at 558 W. De Koven St. to Downtown and other areas.

"People will think that the whole city was destroyed in the fire," Samuelson said. "The West Side, except for a little area around the O'Leary house, was mostly intact. And there are many buildings that are on the South Side and the West Side that predate the Chicago Fire.

Yet the fire missed buildings (including the O'Leary house) even in the neighborhoods it did go through. 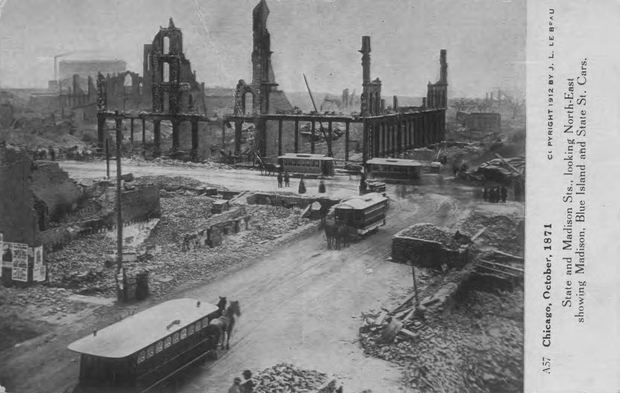 1. The Burning of Downtown Spelled an End to Wooden Buildings in the Loop (Sort Of)

Chicago was determined to prevent a repeat of the fire.

Several times throughout the 1870s the city imposed "fire limits" that prevented — or at least tried to prevent — people from constructing predominantly wooden buildings near Downtown. Any building that fell within the limits had to be masonry, which is less flammable.

"You can sometimes find wood buildings that were built right after the Chicago Fire that were already under construction or finished after they passed the ordinance," Samuelson said. "So you'll find wooden buildings where it would have been illegal."

One such example is the Green Door Tavern, 678 N. Orleans St.

Yet Downtown, which had been ravaged by the fire, hadn't been as wood-heavy as the new fire limits would make it seem.

"The Downtown wasn't as wooden an environment as people make it out to be," Samuelson said. "But you did have things like wooden cornices, the decorative tops on buildings. There were wood structures, but many of the buildings were fairly substantial brick buildings."

The fire limits also had the effect of preventing poorer Chicagoans from being able to afford to build cheaper wooden homes near Downtown. With their insurance policies having burned in the fire, they didn't have the funding to rebuild, and they were forced out during the Great Rebuilding, according to National Geographic.

"Chicago was able to rebuild itself relatively quickly, and supplies were able to reach Chicago ... by rail and water," Samuelson said. "The rail lines largely were still intact. Boats could still get in here. And so the city could actually rebuild fairly quickly."