A New Coffee Shop in Pullman Is Something To Celebrate

PULLMAN — Every autumn when folks trek to my neighborhood for the annual house tour to peek inside the brick row houses of railroad mogul George Pullman’s factory town, I know what some of them are probably thinking.

Wouldn’t it be great if there was a joint that served up a great cup of coffee, maybe a cranberry scone or doughnut with sprinkles?

I’ve thought the same thing for a decade, and some of my neighbors have waited for a cozy coffee shop even longer.

A new coffeehouse is set to open in time to make this year’s Historic Pullman House Tour fully caffeinated.

Local artist Ian Lantz, the guy who turned graffiti into a neighborhood garage-door mural trend, said he expects to clear all the hurdles necessary to open Pullman Café for the big weekend Oct. 10 and 11.

“We’re going to be open for the house tour,” Lantz told me after the place passed its final inspection on Thursday.

And that’s a pretty big deal, and not just for tourists who visit. It’s a bonus for Metra commuters who park in the neighborhood and, most importantly, my neighbors. 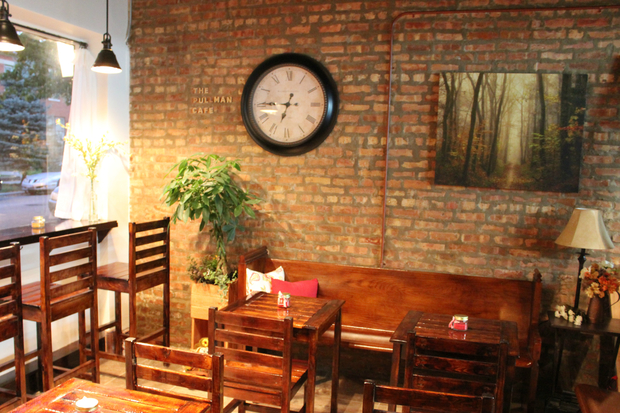 The Pullman Cafe was designed to feel like hanging out in someone's living room. The furniture's handmade in Pullman. [DNAinfo/Mark Konkol]

According to Google, Pullman Café will be the only coffeehouse — if you don’t count Dunkin Donuts, and nobody would — for miles around.

Lantz said the café project got a lot of support from Ald. Anthony Beale (9th), whose staff helped him navigate the city’s sometimes tricky permitting and inspection process.

“It’s a nice added community touch to have a local resident open a new business,” Beale said. “With Pullman’s national monument designation, I’m hoping we get more community people to stand up and open small shops or cafes because the amount of tourists that we expect to attract offers an opportunity to capitalize on an opportunity for people to become successful entrepreneurs.”

This week, Lantz gave me a tour of the bottom floor of the brick two-flat — in its former lives, a neighborhood soda fountain, a secondhand store and a tax preparation office — that’s been transformed into a cozy hangout.

Pullman Café, 11208 S. St. Lawrence, is decked out with tables, stools and benches handmade by Lantz’s aunt, Marie Lantz, a retired information technology executive who decorated the place, a comfy couch against exposed brick walls and a line of window seats with a pleasant view of the historic Greenstone Church across the street. 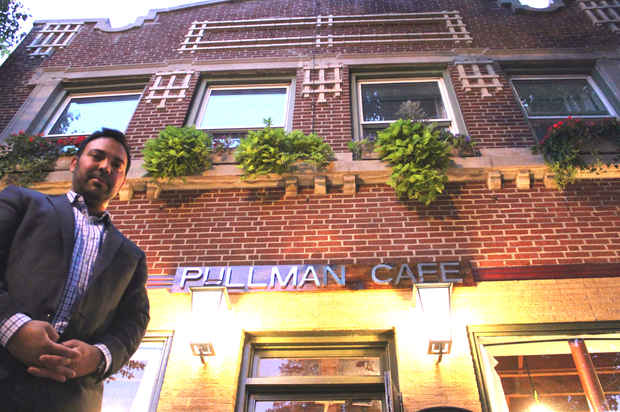 Ian Lantz, owner of Pullman Cafe, says the neighborhood's new coffee shop passed its final inspection and will be open in time for the annual house tour on Oct. 10 and 11. [DNAinfo/Mark Konkol]

“I wanted to make the place, since we didn’t have a coffee shop, as if I opened up my living room and just invited everybody. The vibe doesn’t aim to be hipster or for an older crowd. It’s for whoever wants to come and hang out and have a good time,” Lantz said.

“It’ll be like hanging out at someone’s house, only a little classier,” he said.

Lantz says his aunt, who will be behind the counter on opening day, has been the café’s chief supporter, furniture builder and “visionary extraordinaire,” among other things.

“Without her, this place would be nothing right now,” Lantz said. “She encouraged me to buy here and open this place when other people were saying, ‘Don’t do it. You won’t recoup your money. People get shot down there.’ You know, the whole 'Don’t go south and don’t go west' mentality.”

Pullman Café will open with a simple menu — toasted sandwiches and simple salads, including one made with locally grown greens from the Gotham Greens, the world’s largest indoor urban farm, that grow atop the Method soap factory, served up with brewed coffee, tea, soft drinks and pastries for dessert.

“I want to get the place open and slowly add to the menu. Keep it simple,” Lantz said. “The plan is to figure it out as we go along.”

If all goes well, Pullman Café will get there someday.

Until then, locals like me look forward walking down the street to order up a hot cup of Joe, maybe a scone or a doughnut with sprinkles.

Down here, that’s something to celebrate.