Police Closing In On Problem Block Where 'Crazy Idiots' Reign

By Linze Rice |&nbspSeptember 24, 2015 5:37am | Updated on September 24, 2015 6:30am
@linzerice
Twitter Facebook Email More
A squad car sits in front of Gale Elementary School in Rogers Park in the days after a shooting left a 22-year-old man in critical condition near the school.
View Full Caption
DNAinfo/Linze Rice

ROGERS PARK — Police are working with landlords and getting warrants to clamp down on illegal activity in an area they called an "epicenter of drug dealing" in Rogers Park.

At a community policing meeting Tuesday night in Rogers Park's northernmost police beat, residents described their frustration with large group gatherings, overt drug transactions and ongoing violence in the areas near the 1500 and 1600 blocks of West Jonquil Terrace, including the adjacent Ashland Avenue, Juneway Terrace and Paulina Street.

One woman said she recently witnessed people on the block making an obvious drug deal right in front of her and her young child: "I'm not stupid, I know what that is," she said, describing seeing a small plastic baggie in someone's hands.

Another neighbor described the area as "party central" at all points during the day, saying large groups of people congregate on the street and sidewalks, as well as inside homes.

Officer Robert Dworak said Robin Popelka, the officer in charge of troubled buildings, had recently met with executives at Good News Partners, a local agency that manages several affordable housing buildings in the area, to discuss the problems in some of their buildings on the block.

After that meeting, Dworak said officers were sent into one of the buildings to conduct a sweep of the apartment complex, where they found three people on the third floor who had marijuana and "did not belong" in the building.

"These are innocent people living there with two or three crazy idiots" causing problems for others, he said.

The search was a turning point for officers who have been keeping tabs on the complex, Dworak said, adding that internal sweeps of those buildings will now be part of the beat's strategy to deal with troubled buildings. It's been part of an ongoing process to curb issues at an "epicenter" of unsavory and illegal activity in the beat, Dworak said.

"The whole 1500 block of Jonquil needs attention ... it's one block of problems," he said.

It's also been the site where at least five people have been shot this year, one fatally. Three of those shootings occurred in the 1600 block of West Juneway: March 13, May 19 and most recently Sept. 11.

In that case, Nathaniel Richardson was charged after he allegedly shot a man and woman who were driving by because he was "offended" by the music coming from their vehicle, according to prosecutors.

The couple was driving through the block around 11:15 p.m., during a vigil for the one-year anniversary of a top gang leader's shooting death, which also occurred on the block.

On June 1, 22-year-old Clifton Frye was gunned down allegedly by 17-year-old Germel Dossie at the corner of Jonquil and Ashland after Frye made disparaging remarks about a recently slain rapper who was a rival gang member, according to prosecutors.

The "traumatizing" incident was witnessed by parents, students and staff and temporarily caused the cancellation of recess at nearby Gale Elementary School, which shares a border with Ashland, Jonquil, Howard and Marshfield.

He said the fire department had also been contacted by police regarding the condition of the building, which appeared to have inadequate smoke and carbon dioxide detectors, unsafe electricity-sharing and other violations the fire department "wasn't happy" about.

They, too, will be doing a walk-through to investigate which buildings are not up to fire code.

Dworak said the building's landlord, who lives in the complex, "is aware" of the situation.

Popelka said the complex has an "extensive history" of problems and criminal activity and is well-known to officers in the 49th Ward.

Though the city is currently in talks on what to do with the property — either continue to make progress with its owner or turn it over to the city's drug and gang housing court — Popelka said Good News Partners appears to be "willing to cooperate," but perhaps not fast enough.

"Sometimes you can be told that only so many times," she said. "It's about the overall community's safety."

She said she's still going to meet with the organization in order to foster a more positive relationship with the community rather than going "straight for punishment," but said the department has "legal options we're exploring."

It's not the only building where problems have persisted over the years.

Around the corner at 7641 N. Ashland Ave., Dworak said that 24th District police and Cook County Sheriff's officers boarded up a unit on the building's second floor Monday. People were sneaking in the back of the vacant apartment to package and sell drugs, he said. 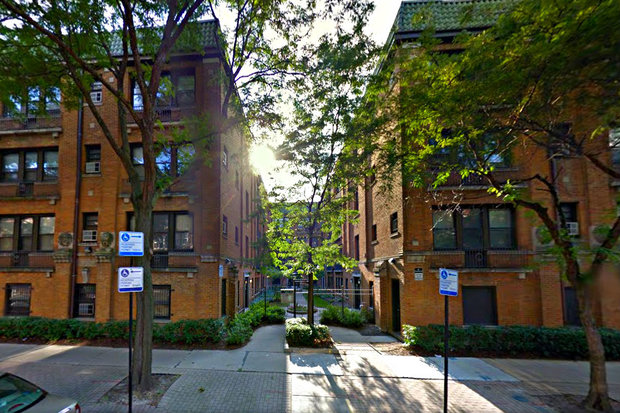 A building at 7641 N. Ashland, seen from its Bosworth Avenue front, where officers recently shuttered a drug-running apartment and found a gun in a dumpster in the Ashland alley. [Google Maps]

Then on Tuesday, police said they found a 9-millimeter handgun in a dumpster outside the now-shuttered apartment.

Work to eliminate, or at least drastically slow, the drug- and gang-related issues in the area still has a way to go, but overall is headed in the right direction, both officers said.

In the meantime, Dworak said tactical units will continue to monitor and document illegal activity at problem buildings on the 1500-1600 blocks of Jonquil, as well as surrounding streets.

Police say in order for them to push for more action on the properties, they need residents to call 911 whenever they see suspicious activity.

"I need those calls for service, that gives me the ammo I need to put a case together," Popelka said.

Residents who wish to make a call to police may request to stay anonymous, as well as use a "silent dispatch" to keep their complaint out of the ears of gang members who may be monitoring police scanners, they said.