A venture led by John Murphy of MB Real Estate has a contract to buy the South Loop parking lot at 1326 S. Michigan. He unveiled the Solomon Cordwell Buenz-designed tower at a community meeting Tuesday night, saying it's not going to be a "$3.50 to $4 per foot" project that prices out neighbors.

"I would consider these luxury, but affordable," Murphy said.

Dave Matthews says parking is bound to be a concern for neighbors:

Murphy re-developed the historic Motor Club Hampton Inn off North Michigan Avenue and a Hyatt hotel in the Loop, among other recent projects. He said this latest proposed tower will cater to a growing number of people moving to the South Loop as rents rise higher Downtown.

"It’s clear that there’s been a migration of people heading to the South Michigan Avenue market," Murphy said Tuesday. "We feel that a luxury apartment tower will be fitting for the demand that’s certainly apparent in that marketplace."

Murphy also hopes to add a street-level restaurant or apparel store to anchor the development's retail. 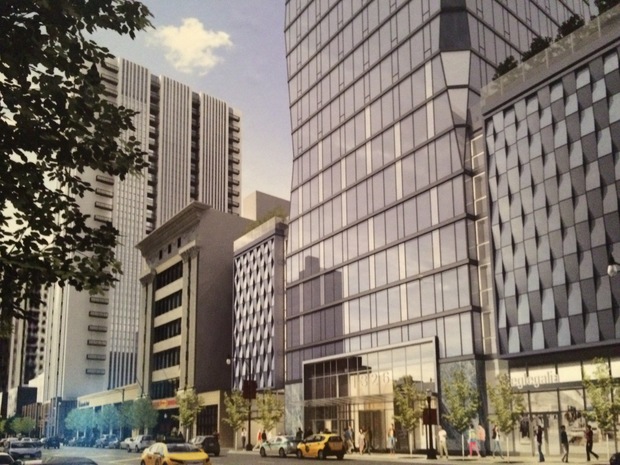 A street-level view of the proposed project along Michigan Avenue. [Solomon Cordwell Buenz]

The property is currently a parking lot. Property records show the land is owned by a venture led by Deerfield-based investor Teresa Sobieski, who planned a condominium tower on the parking lot before getting hit with foreclosure suits. Sobieski did not immediately return a message seeking comment.

Murphy said Chicago-based Solomon Cordwell Buenz is the project's architect. Gary Kohn, a managing principal at SCB, said the tower will also include a lavish amenity deck with a pool and a green roof.

"We find with many residential projects amenity spaces are absolutely critical," Kohn said.

The project would include 240 public parking spaces that would not be dedicated to residents.