At Arbor, You Get Hyperlocal Food, No Hype 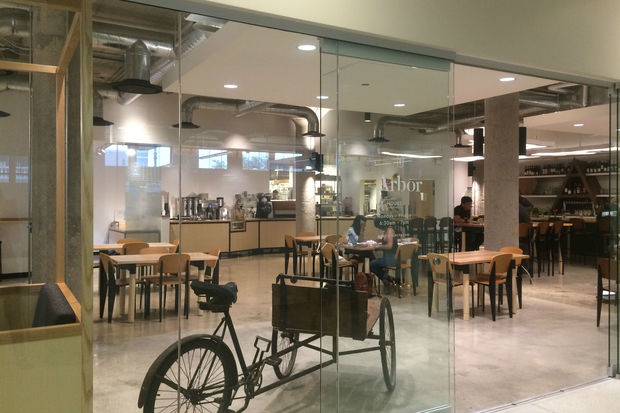 Except ... it's in an office building. On the second floor. And unless you already know about it or you work in the building, you probably don't know about it.

The restaurant inside the Green Exchange, an old lamp factory redone into a center for environmentally focused businesses at 2545 W. Diversey Ave., has kept an intentionally low profile since opening in late June. There was no public relations push. There isn't a sign outside (though that is coming, building owner David Baum says).

"We were like, 'Let's lead with quality.' And when people discover this, they'll be like, 'How is this all happening here?' co-owner Chad Little said.

There's a lot happening at Arbor: construction of a greenhouse for the prolific ground-floor garden, test planting for a farm on the 17,000-square-foot roof, tending to the 10 rooftop beehives.

You can camp out with a latte, a scone and your laptop all morning or grab a salad to go. This week, the restaurant started "Midwestern Omakase" dinner service on Thursdays and Fridays. Call ahead; they'll customize a three-, five- or seven-course meal for you. On Sunday, Arbor will serve brunch with kid-friendly options as part of the pop-up Dose Market at the Greenhouse Loft. 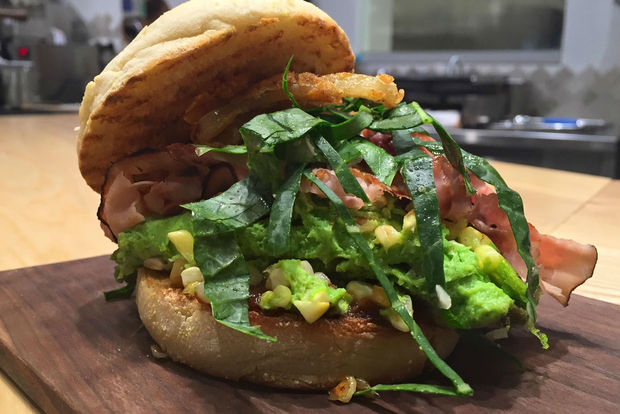 For the people who work in the Green Exchange, Arbor is the antithesis of greasy food court and soulless cafeteria.

Those who want to eat at their desks get their food on ceramic plates with real utensils, "so they can eat like humans," chef and co-owner Leonard Hollander said.

If they pop in at happy hour, in need of a liquid pick-me-up but with a few more hours of work still ahead, they'll return to their offices with a custom cocktail made by Little, garnished with herbs from the garden.

"Is it a restaurant? Is it a bar? A cafe?" Little said, standing behind the movable bar on a recent afternoon, pouring wine for Hollander to sample.

"It's all of those things," Hollander replied. 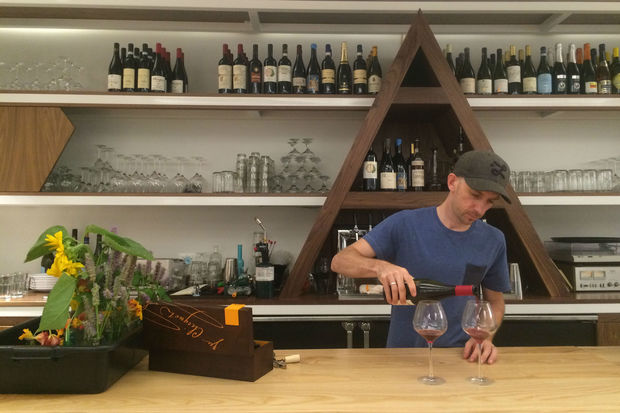 When developers David and Douglas Baum bought the old building in 2005, the brothers knew they wanted a restaurant on the second floor. But not just a restaurant.

"The heart and soul of the building, where people come to collaborate, share ideas, start businesses," David Baum said. "Part and parcel of that was to be sustainable."

The first steps were to install the garden, rainwater cistern and apiaries. Next, Baum had to find restaurateurs.

Little has worked in fine dining, but his expertise is in coffee. He was a trainer for Counter Culture Coffee and before that was at Ipsento Coffee in Bucktown, where he got to know Hollander, a regular customer and the chef at Marion Street Cheese Market in Oak Park.

In 2013, two years after the Green Exchange opened — but with the second-floor space still raw and empty — Little got a call from friend Zina Murray of Logan Square Kitchen, who encouraged him to pursue it.

Little called Hollander, who'd just returned from a three-month sojourn in Europe, where he'd cooked, eaten and drank his way through some 38 cities with his wife. He was aching to start something, inspired by the deeply ingrained local food culture he'd experienced abroad.

With Murray as matchmaker, Baum met with Little and Hollander in August 2013. By early 2014, they began work on Arbor.

"It felt right from the get-go," Baum said. "They're incredibly talented. They're sustainable in every way, shape and form. They're just salt-of-the-earth guys."

Hollander, 37, and Little, 32, each have 1-year-old kids and live within walking distance of the Green Exchange. They walk to work. With the exception of Sunday's pop-up, Arbor is closed on weekends. That way, as Hollander says, they can "have a life."

Get them talking about the obscure things they grow — shiso and sunchokes and hops — and they'll talk excitedly at length about all the ways they use them. 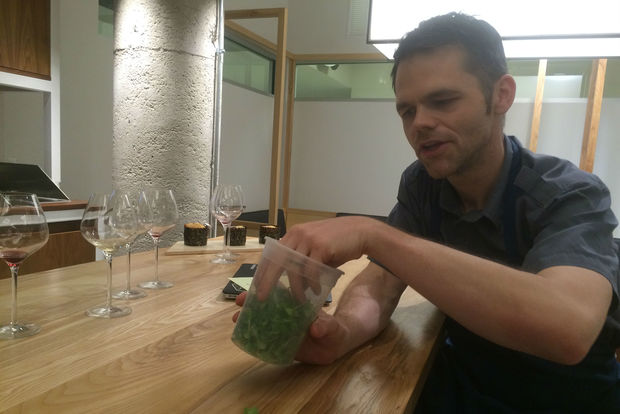 First-time customers often are treated to impromptu tours of the densely planted garden. It's filled with more than 60 kinds of herbs and vegetables and runs beside the Metra tracks behind the building, with views of the Kennedy Expy.

The rooftop rain cistern does the irrigating. Compost from the kitchen feeds the soil.

"It's unbelievable, the amount of stuff they have growing," said chef Nathan Sears of The Radler, who lent them kitchen and cooler space in his Logan Square restaurant early on in Arbor's development.

Even with chef friends like Sears, Hollander and Little didn't talk much about what they were working on.

"I knew they were opening a place," Sears said. "Sometimes, you have a vision but it's hard to explain. But then by the time everything was in, like a week before they opened, then I was like, 'Oh, OK, this is bada--.' "

What's grown on site is used to make or flavor everything from butter to soda. Local producers also figure prominently, including Ale Syndicate, the brewery next door, and Metric Coffee. Many of the wines are from vineyards Hollander visited while traveling; same with the olive oil they use and also sell in a small retail area. 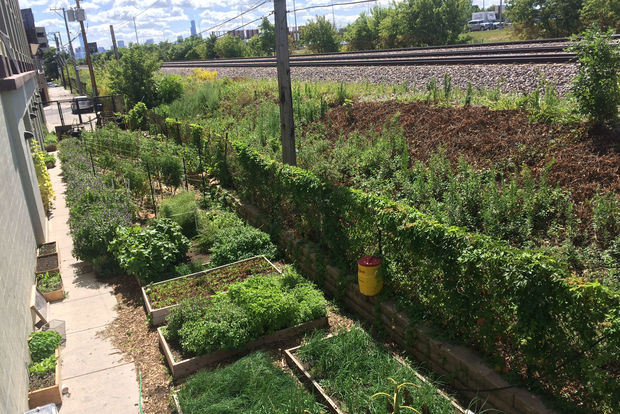 The food is deceptively simple — egg and grain dishes and pastries in the morning, sandwiches and salads at lunch, Spanish-inspired bar bites and "grazing" platters of cheese, meat and pickles for happy hour.

The omakase dinners, ranging from $30 to $100, will change depending on the day and the customer, Little said.

Indeed, most everything at Arbor depends on the customer, and changes accordingly.

"They're always like, 'Here, taste this,'" said Chad Schurecht, 32, who works in marketing at Coyote Logistics, the building's anchor tenant. "One time, they made homemade Sour Patch Kids."

Schurecht drops by Arbor every morning like clockwork for the breakfast sandwich special. On a recent Friday afternoon, he and co-worker Erin Peddle sat at the bar. They weren't ready to knock off work. They just needed a Bloody Mary, or something like it, to take back to their desks.

They watched as Little put together a concoction of Modest vodka, Spanish olive juice, celery bitters and heirloom tomatoes from the garden.

"I would go out of my way to come here," said Schurecht.

Really, he only has to go down one floor. 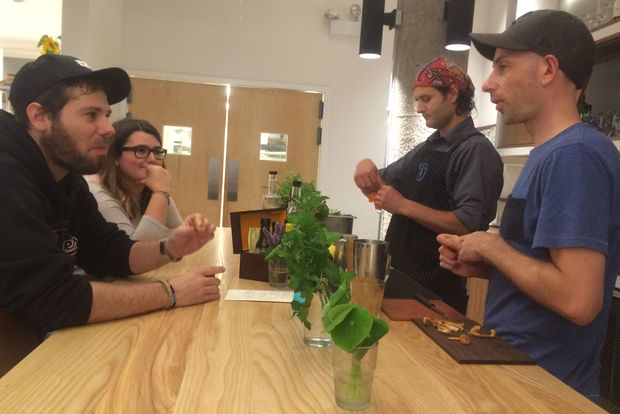