CITY HALL — A city commission on Tuesday approved a plan to transform blighted land into a "grand gateway" into Jefferson Park with 39 apartments and nearly a dozen shops.

The effort, described as a way to jump-start development in the area, got the OK from the Community Development Commission, which oversees projects within TIF districts. The project was supported by Ald. John Arena (45th).

The commission had rejected it last month. But Commission chairwoman Marina Carrott said the decision to set aside four of the apartments for low-income residents was a "substantial" change that warranted another look at the project. All will rent for less than $1,000, officials said.

The project was approved unanimously, but Commissioners Omar Duque and and Jorge Perez abstained.

”I believe sufficient action has been taken,” said Commissioner Shirley Newsome. “The issues raised, for the most part, have been sufficiently addressed.”

The project must also be approved by the Chicago City Council.

Heather Cherone explains why the project had been on hold:

The four-story project at 5161 W. Lawrence Ave. and 5201 W. Lawrence Ave. would be built on lots that have been vacant for nearly 15 years. The city had torn down several buildings to make way for a seven-story, 132-unit condominium complex but that project was never built.

As it did at a community meeting held last week, the project drew fire at the Community Development Commission hearing from some who criticized it as a giveaway of city-owned land to to Mega Realty, one of the area's largest landowners.

The city has agreed to give the portion of the property set to be developed that it owns — worth $530,000 — to Mega Realty, led by Demetrios "Jimmy" Kozonis, the same company behind the original plan for the seven-story building on the property.

Kozonis said he was willing to work with the city. 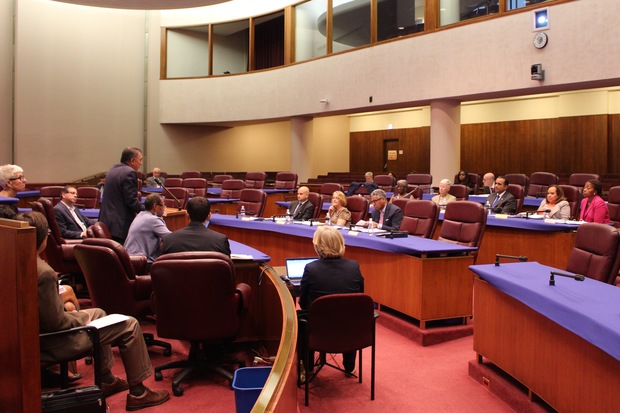 Arena touted the development as a way to correct mistakes made more than a decade ago by city leaders and bring new life to the struggling business district around Lawrence and Milwaukee avenues.

Bob Bank, a Jefferson Park resident, said the project should not be approved because Mega Realty is not planning to hire union workers.

Ernst said the project would transform Jefferson Park into "Kozonisville, like Potterville" in the Christmas classic "It's a Wonderful Life."

If the development is successful and produces a 2.5 percent return on the investment for developers — or if Mega Realty sells the property — within 10 years, the city will get $636,000 as a return on the sale of the property for $1, officials said.

The $16 million project would include space for 11 stores on the ground floor, with 41 parking spaces in an indoor garage for residents and their guests.

A 3,500-square-foot public plaza would also be built on a trapezoidal piece of property between Laramie and Avondale avenues that also will feature a 21-space parking lot, according to project renderings. 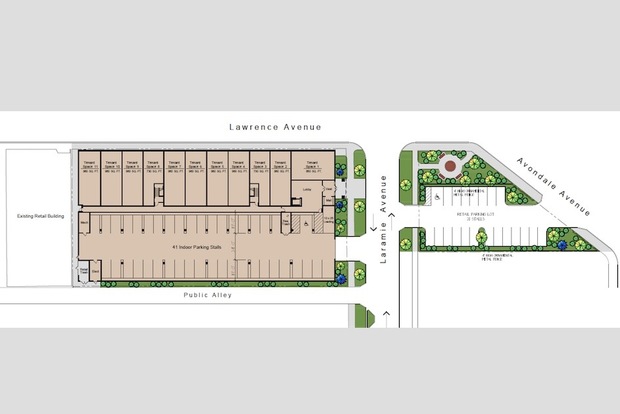