ROGERS PARK — Residents united Tuesday night after a Sunday night shooting at Leone Beach Park left two men wounded. Organizers of the event included a mother and her two young children — one of which she was forced to "lie" to after he witnessed the shooting.

The wounded men, 21 and 19, told police they were standing in the park in the 1200 block of West Touhy Avenue around 8 p.m. when they heard gunshots and felt pain, according to Officer Jose Estrada, a Chicago Police spokesman.

The mother, Grace Husar, who lives in an apartment building adjacent to the park, said as she was putting her infant daughter to bed Sunday around 8 p.m., she looked down from her apartment windows at her husband and 3-year-old son playing in the park.

It wasn't dark yet, she said, and they looked so full of joy and peace she hesitated to call them inside.

Then shots rang out. Husar looked out the window to see a 19-year-old victim just moments after he was shot in the abdomen.

"Something made me look out the window just in time to see a boy falling over in slow motion and then, not realizing he was shot, he tried to get up and couldn't and clutched his belly," Husar said, adding that her husband described a scene where the two men shot at each other behind the protection of large trees in the park.

Husar said she instinctively got away from the window, but by the time she looked back, the swing where her son had been playing was empty, yet still rocking. She panicked.

She called for the two, but heard nothing. She said she clasped her baby to her chest and ran out her back door, fighting off a sea of neighbors trying to block her from running into the park.

As she ran through a gangway between her building and the park, Husar said someone yelled down to her, causing her to turn around, at which point she could see her husband and son on the back porch, along with a large gathering of other neighbors. The boy and his father ran around the block another direction.

Though Husar said "she crumbled" when she realized her son was safe, it was the explanation for the shooting and emotional reaction that was hardest, she said.

"He keeps asking me how he can tell the difference between real guns and fake guns. How will he know who's a good guy and who's a bad guy? He asked me about the man crying on the ground at the park, and if the bad guys got him because his mom wasn't there?" she said. "He asked me if it will happen again and I lied and said no, the police caught all the bad guys. The afternoon he sat at the window quietly watching the kids at the park and said to me wistfully, 'I just hope those kids don't get shot by the real guns.'"

Husar's story inspired about 30 residents to come out and gather in the park do create art, utilize the playground, cook s'mores and symbolize they would not give up their park to violence.

One of those people was Carissa Szymanski, a longtime friend of Husar and the mother of 3½-year-old Regina and Linus, 6 weeks.

She said after the gunfire, her daughter said, "Those were loud fireworks."

Szymanski said though she came to the park on Tuesday, she's still "scared" and shaken by Sunday night's events, but said ultimately it was her deep friendship with Husar that motivated her to face her fears and unite at the playground.

She said the sound of Husar screaming while looking for her son and husband still haunts her.

"I'll never get rid out that sound," she said.

Another mother, Mo Sketch, said she became deeply moved after hearing about Husar's ordeal just minutes before the rally was to begin and decided to bring her 7-month-old baby Kate to the park as well.

Walking up with her baby in her stroller felt "emotional," she said. 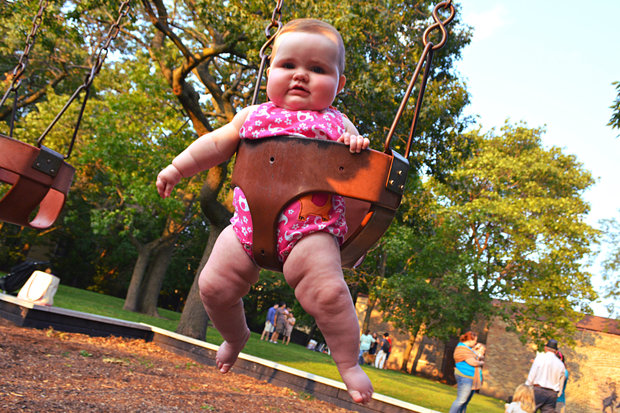 Mo Sketch brought out her 7-month-old baby Kate for a ride in the swings after hearing another mother's heartbreaking story of looking for her son and husband, who were at the park at the time of the shooting. [DNAinfo/Linze Rice]

Other parents said it was the thought of their children that spurred them to action when it came to being active in the neighborhood.

"This is what parks are for, we're just trying to reclaim that space," said Rebecca Weinberg, who brought out her son Fred to play with other kids in solidarity Tuesday night. "He is the reason I became a community activist."

Danielle Westmore brought cardstock and crayons so community members could use their art skills to help create a collaborative neighborhood banner that will be hung on Saturday around 10:30 a.m. during a community get together at Goldberg Park.

She said she came up with the idea when looking for ways to "cope with the violence," and as a way to show a "great sense of community" to one so recently shaken.

"We all want the same thing: A safe and peaceful place to be with family and friends," Westmore said.

John Warner, a Rogers Park CAPS facilitator, said the turnout to the rally was "excellent." 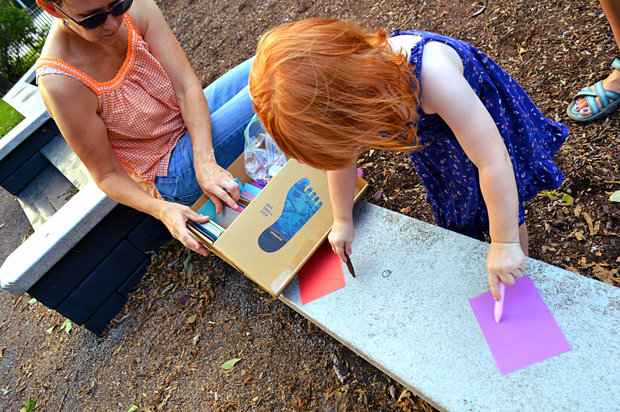 Danielle Westmore and her daughter decorate card stock for a banner to be hung in the neighborhood. [DNAinfo/Linze Rice]

"They're showing that this is not for gang members," Warner said, adding that he wanted to credit police with a quick response to the shooting — a sentiment echoed by several neighbors.

Christine Wellman, secretary for the park's advisory council agreed with Warner, saying that sometimes the community "just needs to send a message" when it comes to responding to violence and moving forward as a group.

Husar said though she can grant her son some comfort for the time being, she knows more shots will eventually cut through the community, and that soon enough her son will become familiar with a world where not even his mother's love can always shield him from the truth.

But she's not ready to give up on protecting her son's obliviousness yet, she said, and on Tuesday she and other neighbors would forge an impromptu community rally at Leone Beach Park, 1222 W. Touhy Ave., to show their support of each other, and to take back their parks.

"The worst part is, when it happens again, and these will not be the last gunshots we hear in Rogers Park, he will know I lied to him," Husar said. "I want Jonah to feel safe. I want to remind him that the good guys outnumber the bad guys and that our friends in Rogers Park love him and love our family. We're part of a community."