WICKER PARK — After being hit by a car at a busy intersection last summer, a Wicker Park man became wary of traveling on sidewalks in his motorized wheelchair.

So you can imagine how useful Eugene Swierzewska finds the Bloomingdale Trail, which runs over neighborhood streets and has ramps for easy access.

For Swierzewska and his wife, Maria, it's meant a much better summer.

"It was scary; he was staying away from streets unless he and my mom were going somewhere like to a doctor's appointment or the store," said their daughter, Kasia Swierzewska.

Eugene Swierzewska, who lives near the 2.7-mile-long Bloomingdale Trail's eastern end, goes on the elevated path every day, often with his dog, a Shih Tzu named Zuzia.

When the path is not too crowded, Swierzewska puts Zuzia on a leash, or, if there are a lot of people, the dog sits on his lap.

Swierzewska's wife of 44 years, Maria, sometimes joins her husband, too.

"They say it's nice to see the young people jogging with the kids. My mom likes the [blue strip] cushion on the side; it good for her joints. My dad likes the pavement because there's no curbs and there's ramps," Kasia Swierzewska said.

Kasia Swierzewska lives in suburban Addison and talked with DNAinfo Chicago by phone since her parents mainly speak Polish.

She said her parents who are in their early 70s both "love the trail" and talk about it all the time. 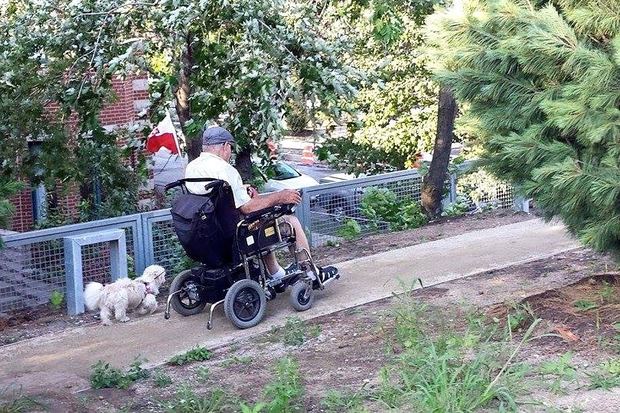 Eugene Swierzewska on the trail in July. [All photos by DNAinfo/Alisa Hauser]

Using a wheelchair since suffering a stroke in 2007, last summer Swierzewska's chair was clipped by a car turning right as he was crossing the street at North and Ashland avenues, his daughter said.

"He's a stubborn Polish guy; he worked in construction, he did not go to the hospital," Swierzewska said of her dad, who flies a Polish flag from his chair.

Eventually Kasia said she will check out the trail, too.

"They are always telling me I have to go on it. I've been too busy," she lamented.

Another Wicker Park senior, Leroy Garry, lives a few blocks away from Bucktown's Churchill Park at 1825 N. Damen Ave., one of 12 spots where trail goers can hop on or off the path, which has 17 ADA-compliant ramps, all accessible to wheelchairs.

"It's nice; I enjoyed it, I'm going to do it again," Garry said last Thursday.

Garry had heard about the trail from a lot of people in the neighborhod but did not understand what it was until he was actually on it last week.

Though the 74-year-old only went from Damen to Milwaukee Avenue and Leavitt on his first trip, Garry said Monday that he is planning to travel to Humboldt Park on the path soon, before the weather turns too cold.

"I have taken the bus to Humboldt Park but could not go all the way there in my chair," Garry said.

[Garry ascends the trail on an ADA-compliant ramp in Bucktown.] 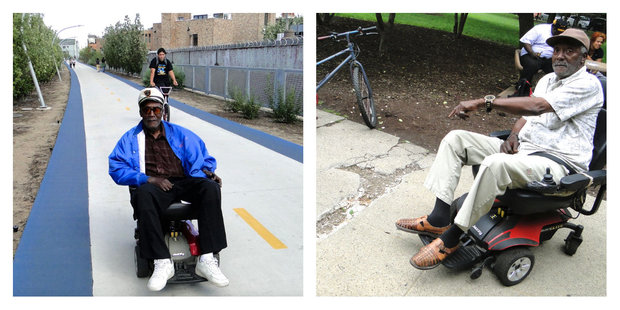 [Leroy Garry, on the Bloomingdale Trail last week and at right, in Wicker Park in 2013.]