And that’s where Chicago police write the most public urination tickets.

You probably could sniff out these spots yourself.

But in the name of public service (don’t call it yellow) journalism, DNAinfo Chicago data reporter Tanveer Ali plotted all 19,496 spots where someone got caught peeing in public since June 2013 so you know where not to go — especially when you just can’t hold it anymore.

This map shows concentration of public urination tickets issued between June 2013 to June 2015. Deep red areas had higher concentration of tickets than yellow areas. The top 20 addresses where citations were issued are also represented on this map. [DNAinfo/Tanveer Ali]

I, on the other hand, accepted the dirty job of visiting Chicago’s top pee-ticket hot spots to find out why bladder control is a pressing issue in some places and not others.

The disgusting public nuisance of peeing in public is, of course, a serious issue.

That’s why Mayor Rahm Emanuel, as part of police Supt. Garry McCarthy’s "broken windows" policing strategy, got the City Council to flush through heftier penalties — a $1,000 maximum fine — for getting caught not using indoor plumbing.

Mark Konkol reveals where you're most likely to get caught:

Out on the street, my findings — while less than scientific — were fascinating and, at times, hilarious.

That is, of course, because so long as they’re not getting caught midstream, Chicagoans love to crack a good pee joke.

Wrigleyville: Home of the Cubs (and public urinators)

As some of you might expect, the top place public urinators got caught with their pants down is in the shadow of Wrigley Field in the alley next to the Addison Red Line station. 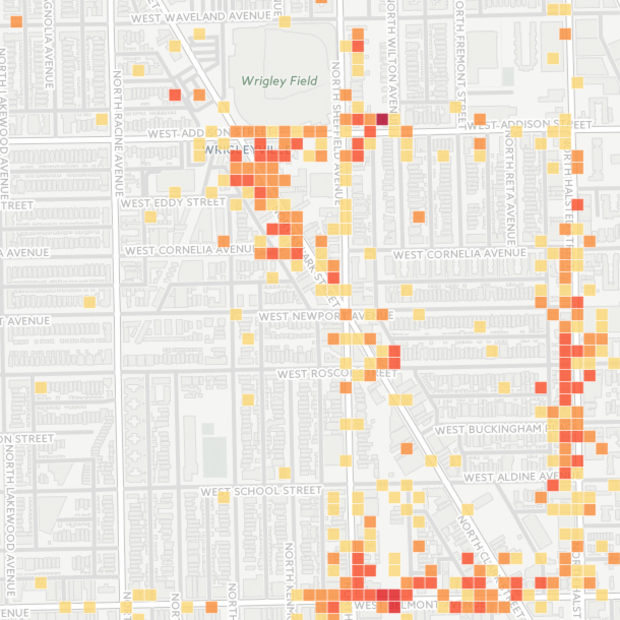 “Around here public urination tickets are like belly buttons,” one neighbor said. “Everybody’s got one.”

After jumping over puddles near dumpsters behind the CTA station, I ran into an off-duty officer who claimed to be a prolific writer of pee tickets.

“They urinate everywhere around here at any time. They just don’t care,” said the officer, who asked that I keep his identity secret so public pee’ers don’t see him coming.

“I write more tickets than anybody. The best is when I catch 'em midstream. … That's when 'fight or flight' kicks in. Some of them just finish what they started. Some try to stop and zip up their pants. I’ve had guys pee themselves right in front of me while I write them a ticket.”

Why is the alley next to the "L" station so attractive to public urinators unlucky enough to get caught in the act?

Well, the officer said, that particular spot is caught in a perfect storm of folks with full bladders, including drinkers desperately fleeing long bathroom lines at nearby crowded bars, beer-chugging Cubs fans, and of course, commuters looking for relief before jumping on the Red Line.

No 2: Something stinks in this South Loop alley

Take the Red Line to the Roosevelt stop in the South Loop and you’ve arrived at the No. 2 spot on Chicago’s pee-ticket list. 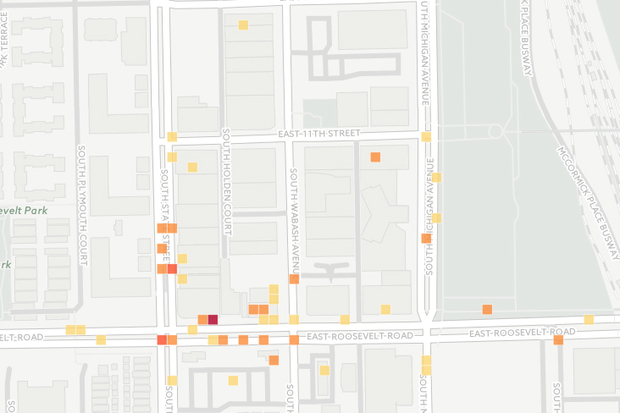 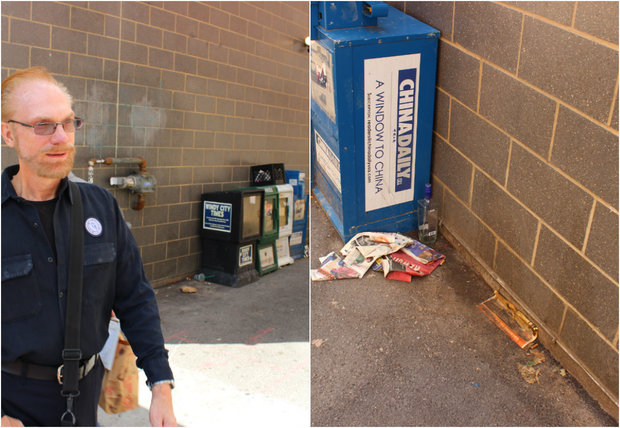 This alley near the CTA Roosevelt Red Line stop is a top place to get ticketed for public urination. [DNAinfo/Mark Konkol]

That fact did not surprise an employee of a nearby burger joint who didn’t want to offer up her name while taking a cigarette break. She confirmed I had found the stinky corner most favored by public urinators who frequent the alley.

“I’ve walked out here while they’re peeing before,” she said, pointing to the urine-stained brick wall and sloped concrete leading to a storm drain. “It’s terrible.”

Chicago actor John Cusack probably wouldn’t be too pleased to find out the place his character, Rob Gordon, caught skater punks shoplifting records in the 2000 film “High Fidelity” is now where people frequently get caught peeing next to a hip shoe store.

When the sales staff at City Soles, Trevor Carreon and Damani Anderson, heard that police wrote 30 tickets, raking in $5,760 in fines near the shoe store at 1514 N. Milwaukee over the last two years, they took the news in stride.

“Yeah, at least it probably happens before we come to work,” Carreon said. 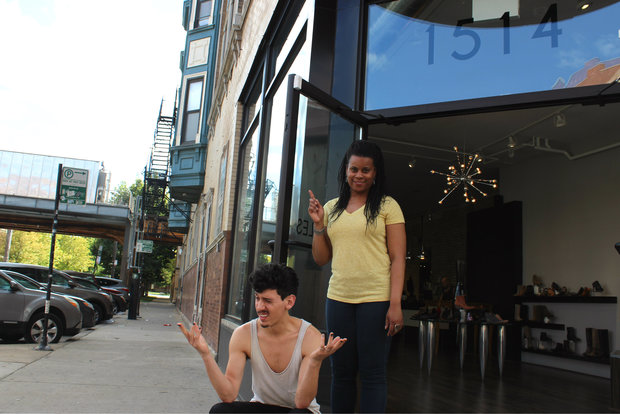 The alley behind City Soles is a top place to get ticketed for public urination. (DNAinfo/Mark Konkol) 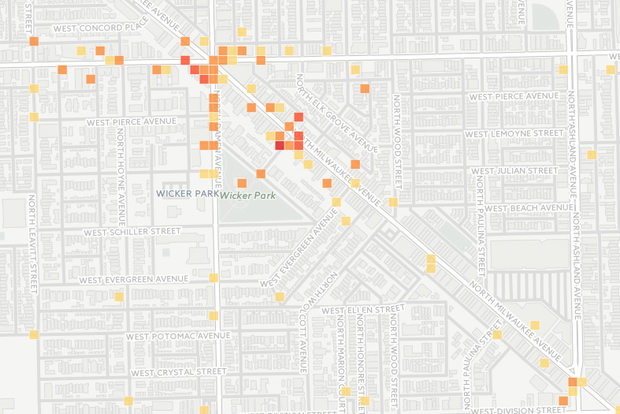 Anderson said the nearby public peeing probably happens about as frequently as it did in the alley behind City Sole’s last location at the crossroads of North, Milwaukee and Damen, a six-corner intersection some locals call “The Crotch."

In Englewood, Preston Higgins told me he knew all too well that the alley between the CTA Green Line stop and the convenience store where you can get a can of beer for two bucks at 6316 S. Ashland doubles as an unofficial public toilet.

He even offered up a tour of spots where police wrote 46 public urination tickets that racked up $12,950 in fines.

“C’mon, I’ll show you where everybody pees,” he said in a friendly voice, pointing toward alley denizens lingering near a urine-soaked wall.

I politely declined his invitation to take a closer look.

“It’s not just urination. They ticket you for drinking, too,” Higgins said as a glassy-eyed man stopped to show me proof, a copy of his freshly written ticket for boozing on the public way. 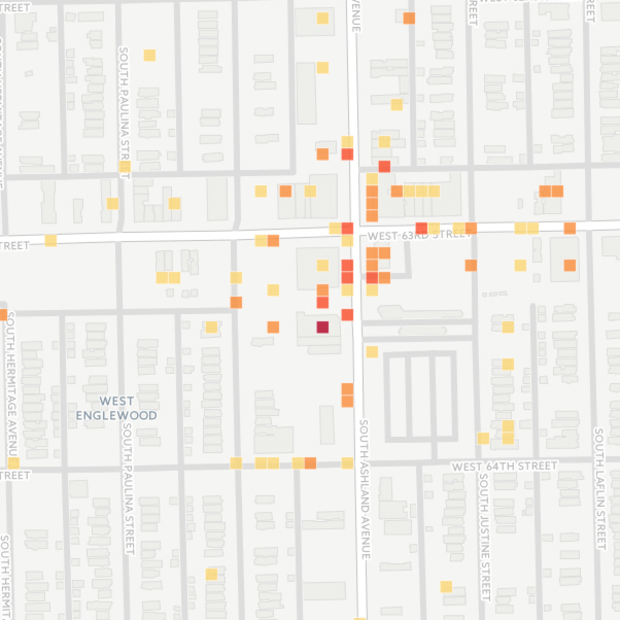 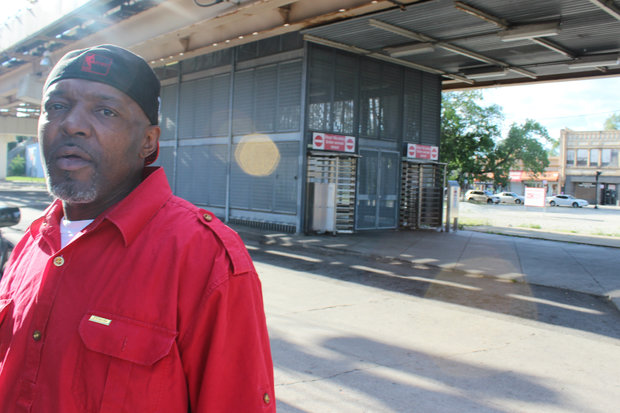 Another stretch of road South Siders get pinched for peeing in public is 79th Street from Western to South Shore Drive, where police wrote 396 public urination tickets that netted $119,100 in fines.

After selling a single cigarette for 40 cents, a friendly fellow wearing a Superman T-shirt at the corner of 79th and Exchange — steps away from a Metra train station — offered up his opinion on why so many people in the sliver of the South Shore neighborhood some know as “Terror Town” get caught peeing outdoors.

“There’s not a public bathroom out here. None of the restaurants got bathrooms you can use. The streets are the public bathrooms, and the trash is the toilet tissue,” he said.

“There’s one old girl who just drop and [goes] wherever she’s at — sidewalk, bus stop, it don’t matter.” 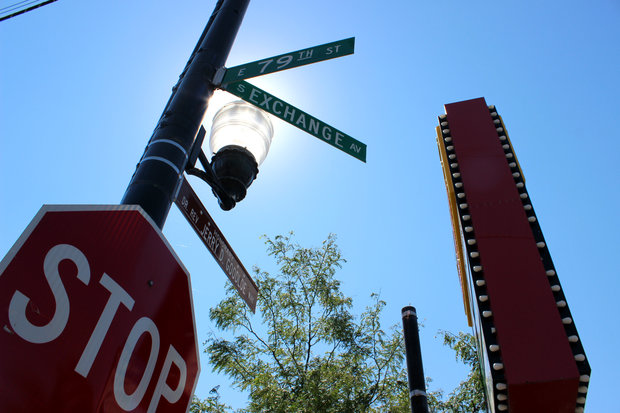 The top places police catch folks peeing in public have a few things in common — they’re typically close to a train station, a boozy stretch of nightclubs or both.

So much so along the Red Line that it wouldn’t be that much of a stretch to rename the tracks that stretch from 95th Street to Howard Street the new Yellow Line.

• On Division Street between Clark and State streets — near a Red Line stop and a collection of popular singles bars — police issued 102 tickets that netted $23,950 in fines. In the alley between She-Nannigans and Mother’s Too, the top place to get caught publicly peeing in the Gold Coast — police wrote 26 tickets.

• In the Loop alley right around the corner from ABC7’s sidewalk studio and steps from the State and Lake Red Line stop, officers wrote 26 tickets amounting to $8,800 in fines.

The 49 public urination tickets that police have issued at 4612 W 50th Street — where the Orange Line makes its final stop at Midway Airport — offer further evidence that Emanuel’s next CTA boss might want to consider treating its customers to some well-placed public bathrooms, or porta-potties, at least.

With the city teetering on a fiscal cliff, there's no way City Hall will consider flushing that much cash down a toilet.

What Your Favorite 'L' Seat Says About You: See If Your Seat Is in Demand

Future Looks Bleak For Cabbies As Rides Dip 41%: 'The Worst It's Ever Been'

Check Out The Bacteria Levels At Your Favorite Beach

Graffiti Is Everywhere, But Some Neighborhoods Hate It More Than Others

With Carjackings Up This Year, Police Tell Drivers To Avoid Fighting Back