AUBURN GRESHAM — In 1965, the invisible red line — marking where African Americans could and could not get mortgages in certain parts of town in an effort by white bankers and others to keep the city segregated — had shifted west and south of the 8200 block of Morgan Street.

With that shift, seven black families were allowed to move onto that block of sturdy brick bungalows. The neighborhood's tiny manicured front lawns were framed by tall trees that lined the parkways and reached over the road creating a lush green canopy over the solidly working-class Auburn Gresham community.

The Parkers, the Fifers, the Franklins, the Allens, the Caldwells, the Smiths and the McCoys each jumped on the opportunity to own a home in Chicago's "Bungalow Belt."

“Mom and me, we were so happy to just have a lawn,” said Delores Parker, a widow who moved there with her mother and her two kids in tow from the Ida B. Wells housing projects in Bronzeville.

Viola Anderson and Edith Fifer, both college girls at the time, met over the back fence, became fast friends and remained neighbors for the rest of their lives.

Fifer, a retired Chicago Public School administrator, would later convince her husband, James, to move across the street from her childhood home.

“I didn’t know if I could convince my husband to move across from his in-laws,” Fifer said with a sly smile. “But it worked out very well.”

And Anderson, a retired CPS teacher, still lives in her late mother’s home with her daughter and grandchildren. She remembers her family’s move on Halloween 1965 as a victory — the moment the American Dream became a reality.

“When we met across the fence it was a triumphant feeling just to be allowed to live on the block,” Anderson said.

“So when [black] families moved in, we moved in together. There wasn’t much tension. Never a problem.”

But most of their white neighbors immediately fled to the suburbs.

“We did not encounter very much racism other than people were in a hurry to move out,” Fifer said. “You would go to bed and when you woke up in the morning three neighbors would move away.”

They’ve become more than just neighborly acquaintances; formally banding together 15 years ago to form a block club with the goal of maintaining an extended family feel that survived organically for generations.

Together they keep close watch over each other and protect the block that brought them together from the evil that lurks nearby — the open-air dope deals, sidewalk robberies and violent men with guns that surround them.

They’ll tell you not much has changed on their stretch of Morgan except those beautiful old trees that shaded the street got chopped down after their strong roots crumbled sidewalks and clogged too many sewer drains. 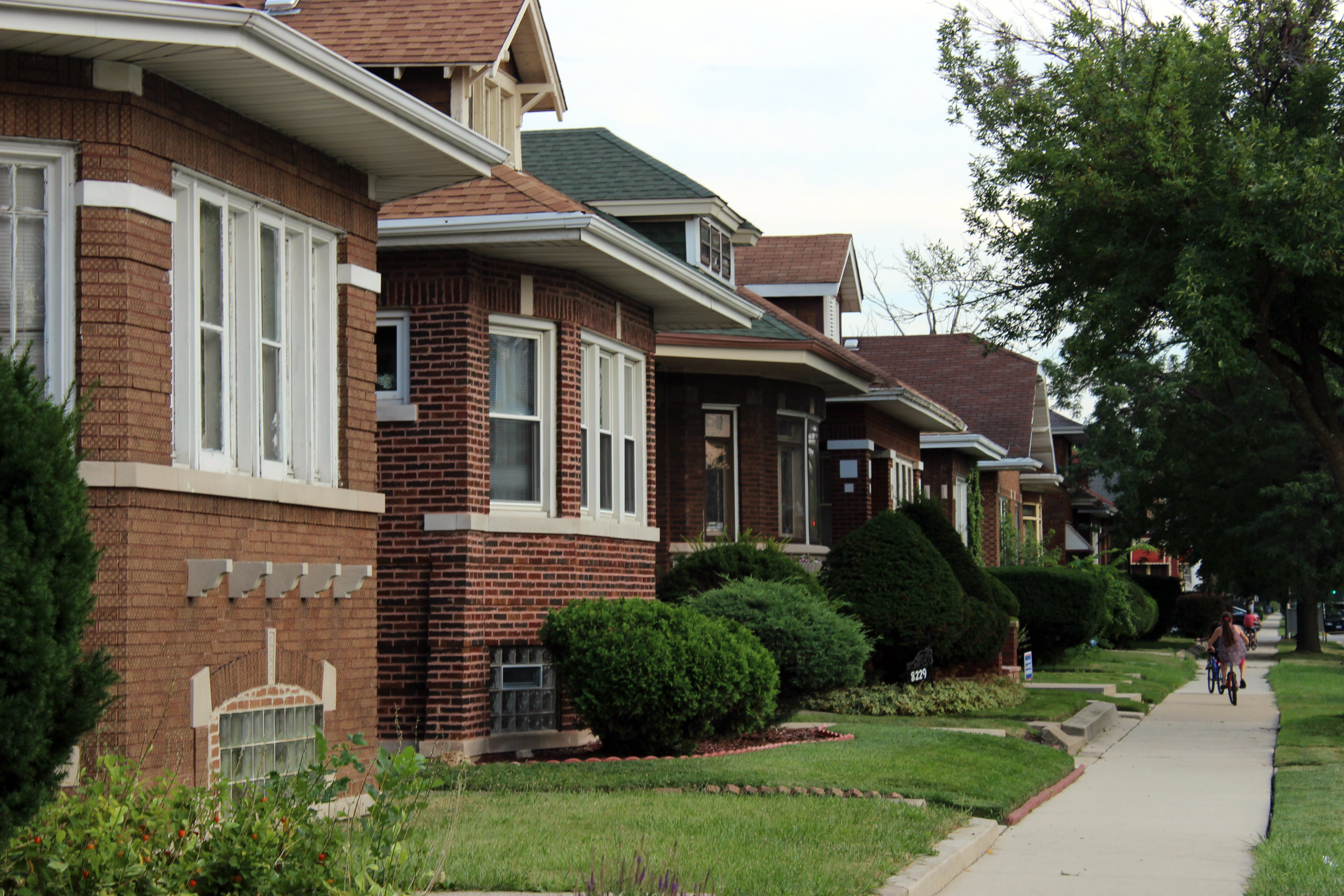 That might be a rather idealistic view of life on the no longer tree-lined South Side street, but in a lot of ways it’s true.

“We all see things the same way our parents did,” Anderson said. “When you got a house like this back then it was a dream. It wasn’t something you fixed up and sold like people do now. You kept it up for your children and their children. That’s what we still do.”

In the Gresham police district, there has been a steady stream of drug arrests, burglaries, robberies and violent crime and gun cases for years.

But neighbors say you won’t see drug dealers working their corners or unwanted strangers loitering on sidewalks thanks in part to their old-fashioned values in action.

Every month, members of the block’s half-century club and new neighbors gather in a bungalow basement to keep their tight-knit collective focused on preserving their communal quality of life.

The neighbors keep a block directory of phone numbers that doesn't collect dust.

“We have a buddy system since a lot of our neighbors are getting older,” Anderson said. “So, if you don’t see a neighbor for a couple days we call to see what’s going on. We say …’It’s not being nosey. You’re just being concerned.' ”

When the lights go out or random street crime spills onto the block, the folks living on 82nd and Morgan have a system for getting fast action.

“If there’s any kind of incident or if a neighbor is having some difficulty we call police and then the neighbor next door, and they call the police. When the police department gets 10 calls from one block they usually send someone quick,” Fifer said.

And in a pinch, the block club’s phone tree brings enough folks out onto their front lawns to help diffuse potentially dangerous situations.

“It was 7 in the morning, a year or so ago, and a woman was being chased by a young man who was trying to assault her. Someone heard screaming and we called around on the telephone tree,” Fifer said.

Ten or 12 families all ran outside that morning.

“The man saw us and ran away,” Anderson said. “We’re a very proactive block. Don’t know too many blocks where that would happen.”

It’s all part of a old-school philosophy that centers on being accountable for what happens on the block — a stark contrast to the pervasive “no-snitch” code of silence that police say keeps cops from solving more shootings in Chicago.

“When we see someone walking down the block, we make it our business to speak to them so they know we see them,” Anderson said.

“If you see someone and they know it, it’s harder for them to come back and do something bad because they know they can be recognized.”

The block’s elder stateswomen — Parker, Fifer and Anderson — will tell you that it’s hard sometimes to get new residents, especially younger folks unfamiliar with their longstanding tradition of really knowing your neighbors.

“We don’t do a welcome wagon but we send out a note saying new people live on the block, be sure to make them feel welcome. We do that by speaking to them. Everybody speaks to everybody. We have to,” Anderson said.

“We talk about everything, mainly how to get more people involved in the block club and keep people interested.”

Block club members chip in 10 bucks a month that goes to sponsor fun events and, more importantly, to lend a hand when a neighbor is in need.

“When there’s a death in the family or a fire, we give a donation,” Fifer says. “It’s one of the things that we do for each other.”

On Sunday, the neighbors celebrated their long history with a classic, old-time Chicago block party they call the Family Fair that doubles as a neighborly reunion.

At the 16th annual gathering, the Chicago Historic Bungalow Association honored the block’s elder homeowners with certificates recognizing them for taking care of their historic homes for 50 years. 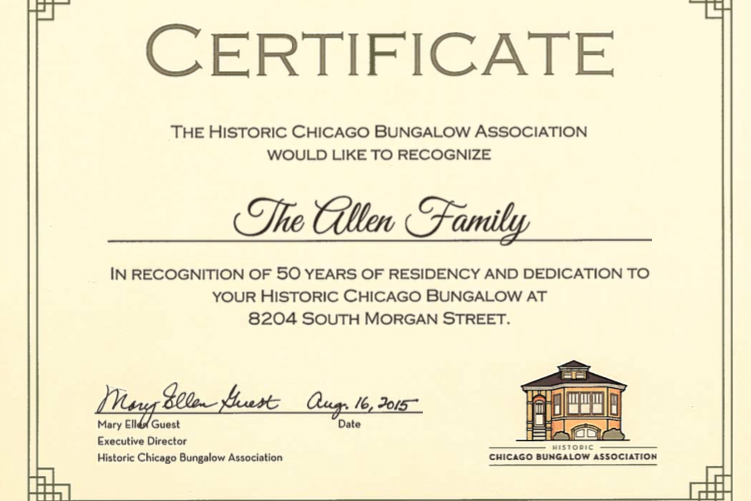 “The fact that seven of the original families have lived on the block for 50 years is a major accomplishment,” said Mary Ellen Guest, executive director of the bungalow association.

“It’s a really tight block that’s stayed tight through all the horrific challenges that Auburn Gresham has been through.”

The special patch of Auburn Gresham even has its own slogan derived from the way the late Mayor Richard J. Daley described Chicago in the 1950s.

“We tell people we’re a block of unity,” Anderson said. “This is ‘The Block That Works.’ I wouldn't want to live anywhere else."