WEST RIDGE — The owner of a proposed medicinal marijuana clinic on North Western Avenue says the facility will have armed "casino-like" security, will focus on hiring military veterans and will offer discount pot for needy children.

Bob Kingsley, owner of Green Gate Compassion Clinic trying to open at 6501 N. Western Ave., made his promises at a packed house of 50th ward residents Tuesday night held to address questions and concerns over the dispensary before the Chicago Zoning Board of Appeals hears his case for a special use permit on Aug. 21.

"This is not Colorado," Kingsley said to residents, reassuring them there were major differences between "stoners" and qualifying patients who use medical marijuana.

In addition to hiring local vets, he vowed to try to employ people with disabilities and vowed to keep the building's perimeter safe.

Here's an in-depth look at what residents need to know about Kingsley's proposal:

How Does It Work?

Kingsley said he expects the shop to serve about 200 patients a week who receive medical marijuana recommendations from their doctors.

So far, he said about 2,800 people across the state have been approved for medical cards, 10 of which are pediatric patients.

Once they receive a card from the state, they can enter the clinic where Kingsley will then assist them in picking out a strain that aligns with the client's symptoms because different types of marijuana treat different symptoms.

Patients with out-of-state doctor recommendations will not be able to buy medical pot in Illinois, Kingsley said.

For the first two weeks of the clinic's opening, Kingsley said a registered nurse will be at the shop to answer any questions he may not be able to.

The average sale comes to about $100 he said, but patients could end up paying more or less depending on the quantity they buy and their condition.

While there will be smokeable marijuana available, he said edibles, oils and drinkable infusables will also be in house for people who prefer not to smoke.

In February, Kingsley was given one of the few medical marijuana dispensary licenses handed out by the state and in March vowed to invest $400,000 into the building at 6501 N. Western Ave. He said Tuesday night that number could fluctuate between $350,000 and $600,000.

In April, Kingsley released renderings of the building to show the business was "not a red light district," despite the stigma some attach to the medical marijuana industry.

The space where he proposed the building is currently occupied by a parking lot used by cab drivers.

He said he also plans to hire from within the community, focusing on offering job opportunities to veterans and people with disabilities in the Rogers Park township before opening the floor to other applicants.

Because of the "astounding number" of veterans diagnosed with Post Traumatic Stress Disorder, he said he wants to make sure they have a place in the community at his clinic. 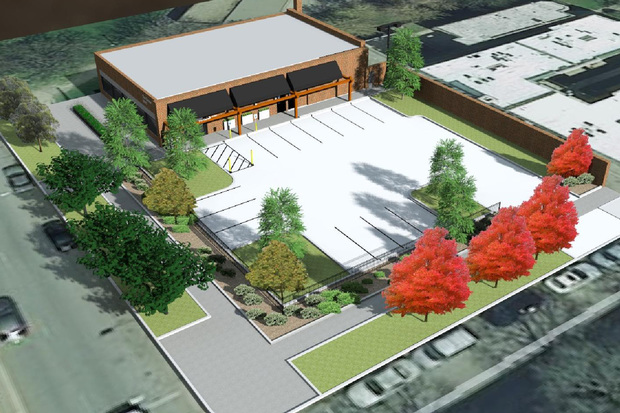 A rendering of the building at 6501 N. Western Ave. [Green Gate Compassionate Clinic]

Kids In The Community

Kingsley said one of his top priorities was making sure children who had qualifying conditions had access to medical marijuana.

He said he'd recently spoken with a medical cultivator who said if they were able to provide Kingsley with medical marijuana for pediatric patients specifically for free, or at a low cost, Kingsley said he would in turn offer it for "free" or at "rock bottom prices" for children who are patients.

The law requires Kingsley pay a 7 percent tax on his inventory and charge a 1 percent tax on the medical cannabis sales, but said that could mean pediatric patients pay mere cents, or a few dollars at most, for their cannabis. If he is able to work out the deal, he said it was a guarantee he was willing to offer.

While some residents expressed concerns in the past that the clinic would make the drug more readily available to kids, Kingsley said the building will not have the words "marijuana" or "cannabis" anywhere on the building.

Since bringing his idea forth to the community, he hasn't received much support from Ald. Debra Silverstein (50th).  She had said was "unequivocally" opposed to the clinic's plans but in April said that while she approves of medical cannabis, she opposes the clinic's location because of its proximity to Warren Park "where hundreds of children play."

Silverstein has not elaborated or provided any specific examples of ways in which the clinic could endanger children. On Tuesday, she reiterated that she wasn't opposed to medical pot, but did not like its proximity to Warren Park.

The state prohibits dispensaries from opening near schools and daycare facilities, but doesn't restrict opening near a playground or park.

People of West Ridge, a neighborhood group, said they disagreed with Silverstein.

"We believe that no harm will be caused to children playing in the park because of the dispensary's location. The dispensary's clients will be patients seeking lawful medical treatment, not recreational drug users. Those patients will have undergone a rigorous screening process before being approved to receive medical marijuana legally prescribed by a licensed physician," the group wrote in a petition in support of the clinic.

A representative from the Epilepsy Foundation of Greater Chicago said they supported the clinic because they have witnessed firsthand the relief children can experience with medicinal marijuana.

Kingsley said the clinic would have "casino-like security," including hiring off-duty law enforcement workers, around the clock and that he expects the 3,500-square-feet dispensary, owned by parent company 420 Windy City, to be open from 10 a.m. to 8 p.m.

Two armed guards would patrol the clinic during the day, while one would be on duty at night, Kingsley said.

The dispensary would also include a fingerprint scanner and two waiting areas — each with an armed guard — that patients would need to pass through before checking out.

He said he would also have a "state of the art" surveillance system in the works.

Guards would also be available to help patients back out to their cars, he said.

Some who have voiced safety concerns cite the risk that come along with running a cash-only business due to the fact many banks and credit card companies are either prohibited from accepting payment from marijuana-related transactions, or have internal policies against it.

Each patient's prescription would come prepackaged, unlike recreational dispensaries in states like Colorado where purveyors can select strains from like at a "meat counter," Kingsley said.

He said he didn't worry about the current challenges dispensaries face, saying that, "If you want to break into something, Devon Bank has 50 times more money."

In December, Congress passed a provision that prohibited federal agents  from raiding marijuana retailers or clinics in states where the substance was legal. Still, without cooperation from banks, many pot clinics must face the reality of a high-volume, cash-only business.

Once the federal government moves marijuana from a Schedule 1 drug, the most severe category with "no accepted medical use," to a Schedule 2 drug, Kingsley said banks will be "eager" to accept transactions from dispensaries. He said he's confident neighboring Devon Bank will be one of the first in line to help out.

The neighborhood group said they didn't believe the cash-only policy was enough to nix the deal.

"We believe that this practice will change as lawful dispensaries prove similar to other businesses in their risk of robbery and burglary," they wrote. "The presence of law enforcement officers 24/7 should, if anything, be a deterrent."

Kingsley told DNAinfo in March that he first became interested in the medical marijuana industry after kidney failure ended his career at the Chicago Board Options Exchange in 1995. He said he is the only owner or operator of a dispensary in Illinois who has a condition that is treated by medical pot.

Since then he's received two kidney transplants, most recently from his son who also suffered seizures (a condition known to be treated by medical marijuana) as a child.

Dialysis treatments over the years caused residual, intermittent pain in his feet — and pot helps, he said. He said he traveled to Colorado as much as possible for marijuana treatment.

He also said a head-on collision on Lower Wacker Drive left him with post traumatic stress disorder, another listed medicinal use for cannabis.

He is currently working with a small team primarily consisting of a project manager, brand manager and art director he said.

The zoning board will hear the owners' request on Aug. 21 where it will decide whether or not to issue the special use permit required to open.

The meeting is at 2 p.m. at 121 N. LaSalle, and is open to the public. Both Silverstein and Green Gate representatives have urged the public to attend and voice their opinions before the board.

Kingsley said two days after the hearing, he plans to begin construction at the site and is scheduled for an inspection by the state Nov. 1. He said he hopes to be open between Dec. 15 and Jan. 31, but would prefer to open this year.

"If you're scared of it, you won't try it," he said. "But if you try it, it might help you change your life, and that's what our mission is."