The People's Daily, the official publication of the Chinese Communist Party, tweeted a photo proclaiming the completion of a "sculpture in shape of oil bubble" to mark the site of the first oil well in Karamay, an oil-producing city in China's Xinjiang province.

Sculpture in shape of oil bubble is built at site of 1st oil well in Karamay, #Xinjiang http://t.co/AqbugmJr7o pic.twitter.com/jl0cATljTA

The structure appears to be the exact size, shape and composition of Millenium Park's Cloud Gate, more commonly known as "The Bean." Representitives for Cloud Gate's creator called the Chinese artwork "blatant plagiarism."

Chicago's Bean was unveiled in 2006. The city describes it as a "110-ton elliptical sculpture...forged of a seamless series of highly polished stainless steel plates."

Designed by artist Anish Kapoor to "reflect Chicago's famous skyline and the clouds above," it measures 66 feet long by 33 feet high and has a 12-foot-high arch, a common site for tourist selfies.

Kapoor said in a statement  that "the Chinese authorities must act to stop this kind of infringement."

"I feel I must take this to the highest level and pursue those responsible in the courts," Kapoor said the statement. "I hope that the Mayor of Chicago will join me in this action."

Meanwhile Ma Jun, a contruction official from Karamay's Tourism Bureau, is maintaining that the project is purely original, according to The Wall Street Journal. He told the publication's China Real Time blog that the Chinese structure "looks like an oil bubble," where the Chicago icon "has a bean shape."

“The idea of the oil bubble comes from the Black Oil Mountain, which is a natural oil well in Karamay,” Ma added.

Emanuel wasn't worked up about the situation when asked about it on Wednesday, the Sun-Times reports.

“Imitation is the greatest form of flattery, is what I would say. And if you want to see original artwork like this or like the Bean, you come to Chicago,” Emanuel said. 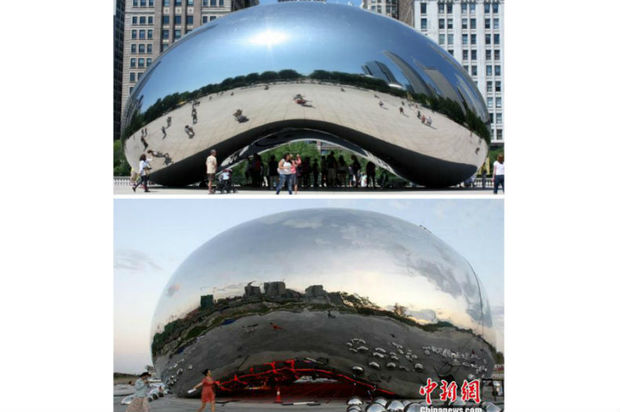 The City of Chicago says its Bean was built to replicate liquid mercury.

According to a 2005 story in the Reader, Kapoor holds the copyright, even though it is a city-owned sculpture.

Could China be adding Chicago to its list of copy/pasted cities, which currently include replicas of Paris and Florence? Do we have a "Cloud Gate-Gate" on our hands?

Keith Paul, who stopped by The Bean (the Chicago version) Wednesday as part of a visit from Clemson, S.C., thought Chicagoans deserve to be outraged over the copycat.

"My first reaction is to think that either the folks over there aren't very well-traveled, or their architect deceived them," Paul joked. "Of course it's the exact same thing, and on this I think the Chinese government just has to fess up and face the music, which they've refused to do in a lot of instances."

But Jane, a visitor from Sea Cliff, N.Y., said Americans shouldn't be so quick to judge.

"It looks similar, sure, but this kind of thing happens in music and art all the time—you think you've created something unique, only to see that someone else did it already," said Jane, who declined to give her last name. "You can never change the way people look at things. It's always subjective, and people from other places are always going to see things differently."