Attorney Victor Henderson filed a motion Wednesday to withdraw Jackie Robinson West’s court petition asking a judge to force Little League to answer questions, provide information including the names of whistleblowers and other details, regarding the events that led to the team being stripped of its title.

The law firm representing Little League International must have not gotten served notice of JRW’s decision to backpedal on the court filing that day.

On Thursday, attorney Scott Schutte of the Chicago firm Morgan, Lewis and Bockius filed Little League’s objection to Jackie Robinson West's legal maneuver, arguing Jackie Robinson West’s court petition amounts to a fishing expedition that “one can scour … and still have no idea what claim JRW is trying to assert or what relief JRW is seeking.”

The legal response included a detailed account of the how Little League discovered the disgraced Chicago league’s leaders stacked its All-Star team with ringers and attempted to cover their tracks including the never-before-seen bogus maps at the center of the cheating controversy — and this fact: “Only five of 13 JRW players who played in the 2014 Tournament were eligible.”

Mark Konkol discusses the documents and what's next for JRW:

Little League's Side Of Story

DNAinfo Chicago was first to report allegations that Jackie Robinson West leaders conspired with the Chicago District 4 administrator to secretly change the league boundaries to create a super team of ringers, some who live and attend school in the suburbs, against Little League rules.

They claim Jackie Robinson West wasn’t treated fairly and suggested that Little League International knew about the boundary issues, allowed the team to play in the international tournament anyway and blindsided them with the decision to strip the title because public pressure mounted and the all-black team wasn’t of financial value to the Pennsylvania-based league and ESPN, which paid $60 million for World Series broadcast rights.

But in court papers, Little League told a different story and shared for the first time important details about what led to the controversial decision to strip the title.

The court filing responds directly to some of the biggest sticking points made by Jackie Robinson West officials, who have repeatedly said that since the team’s eligibility was reviewed and approved at every stop during the World Series tournament run it was unfair to strip the title nearly six months later.

While it’s true JRW’s eligibility was checked during the tournament, Little League said in court papers those eligibility reviews had an unknown flaw that allowed JRW to get away with cheating.

The eligibility reviews “did not include verifying the accuracy of the league boundaries or ensuring that the addresses provided … fell within league boundaries,” according to the court filing.

In a court filing footnote, Little League stated that prior to 2014 they didn’t think there was a need to check league boundaries or whether addresses were plotted accurately on boundary maps and “expected the honesty of league officials, district administrator review, and self-policing by neighboring leagues would keep such wrongdoing from occurring.”

As things turned out, that wasn’t the case with volunteers on Chicago’s South Side, Little League alleged in court documents.

Two bogus maps and a cover-up 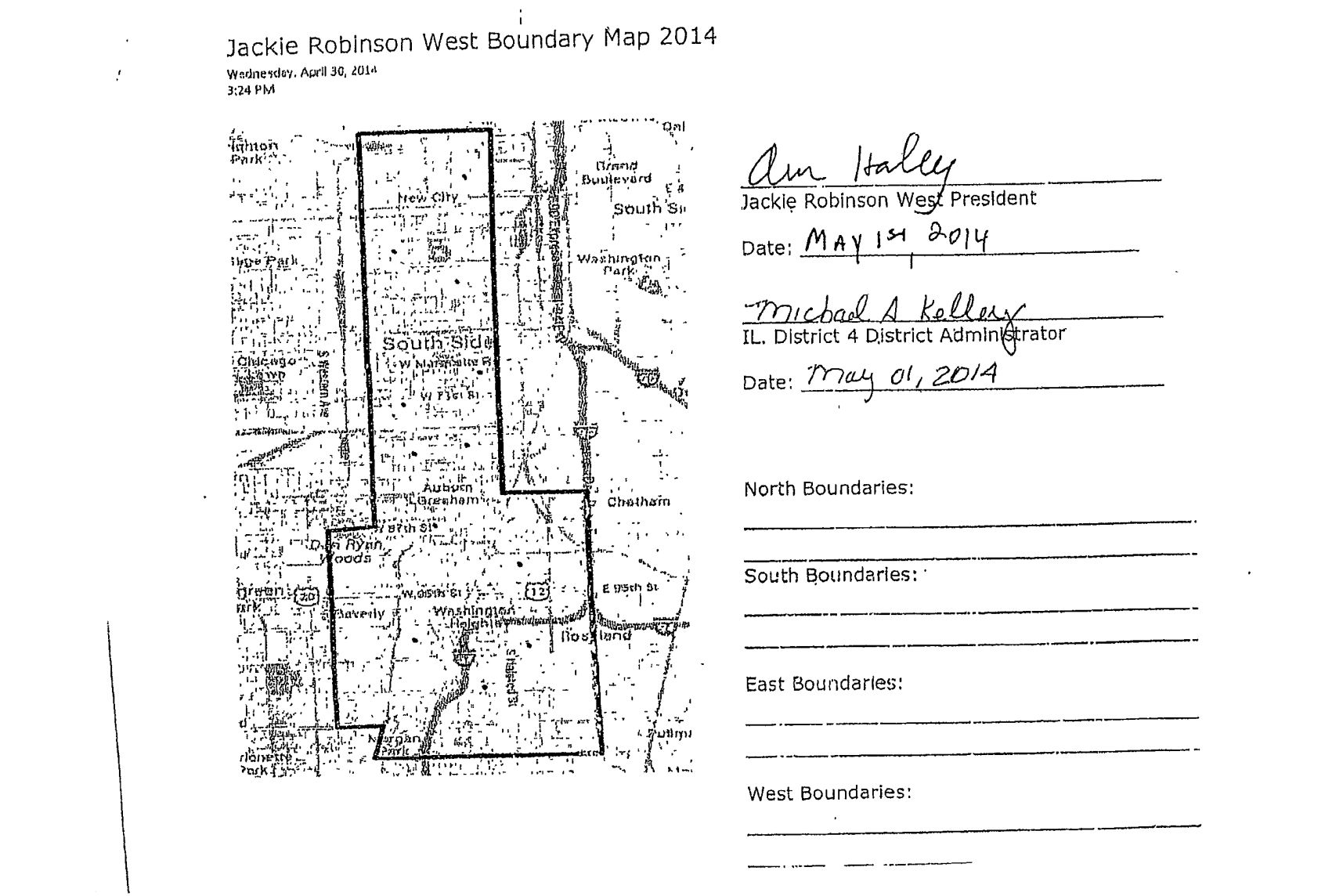 After questions about player eligibility surfaced in September 2014, Little League asked Jackie Robinson West officials to provide another copy of the league’s boundaries.

JRW submitted a map that was different from the original “in several respects, including that the eastern boundary was pushed significantly farther east” near the Metra tracks adjacent to Cottage Grove Avenue. Still, only 12 of 13 JRW players listed in the tournament affidavit had addresses within those league boundaries, according to court papers. 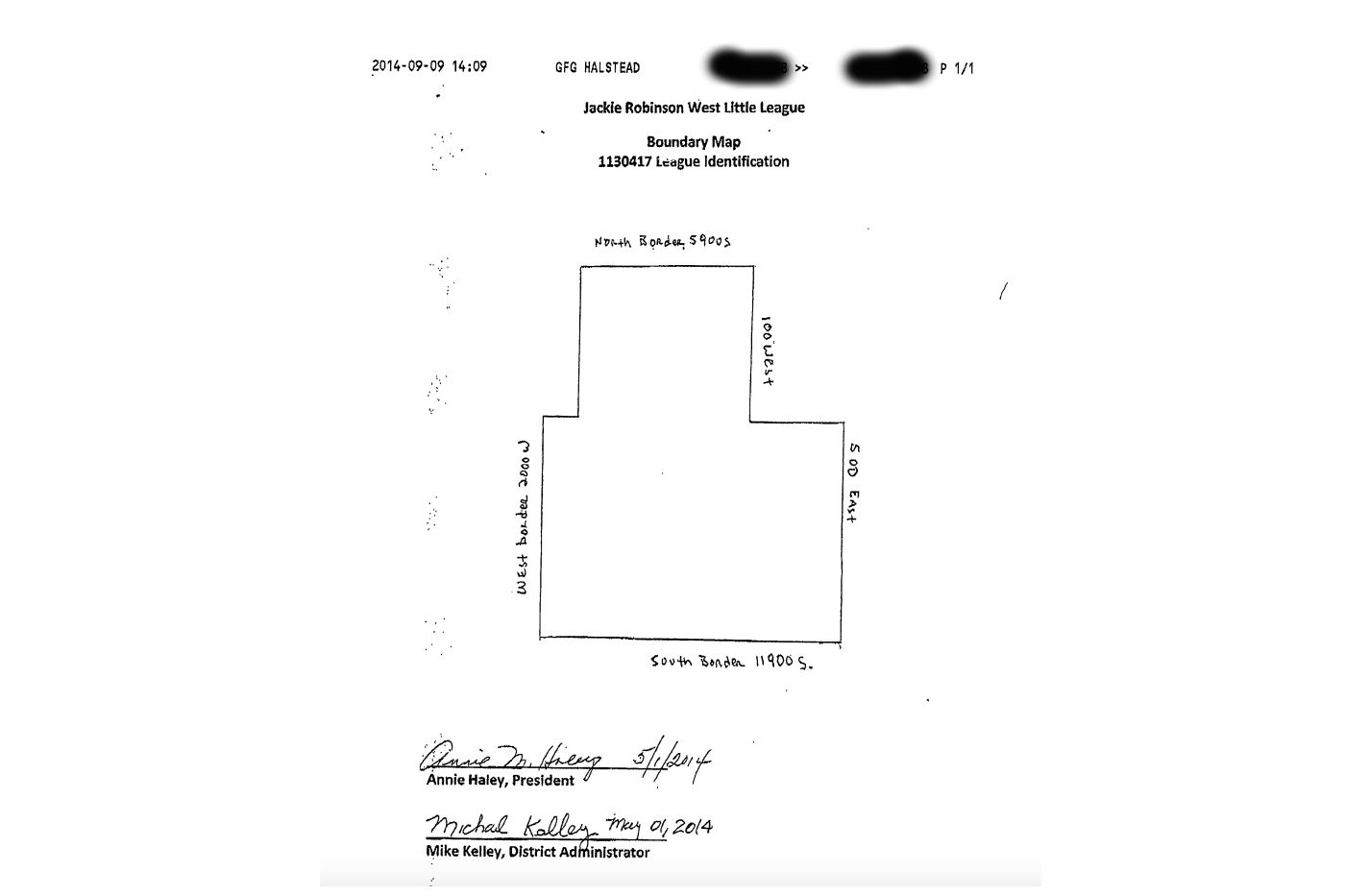 And in December 2014, as top Little League officials made plans to travel to Chicago to settle any District 4 boundary disputes for the following season, Jackie Robinson West leaders were again asked to provide their league boundary map that plotted player addresses.

The map JRW submitted — a rudimentary drawing without street names that plotted player addresses by hand-written numbers — was different from the previous versions submitted to Little League. 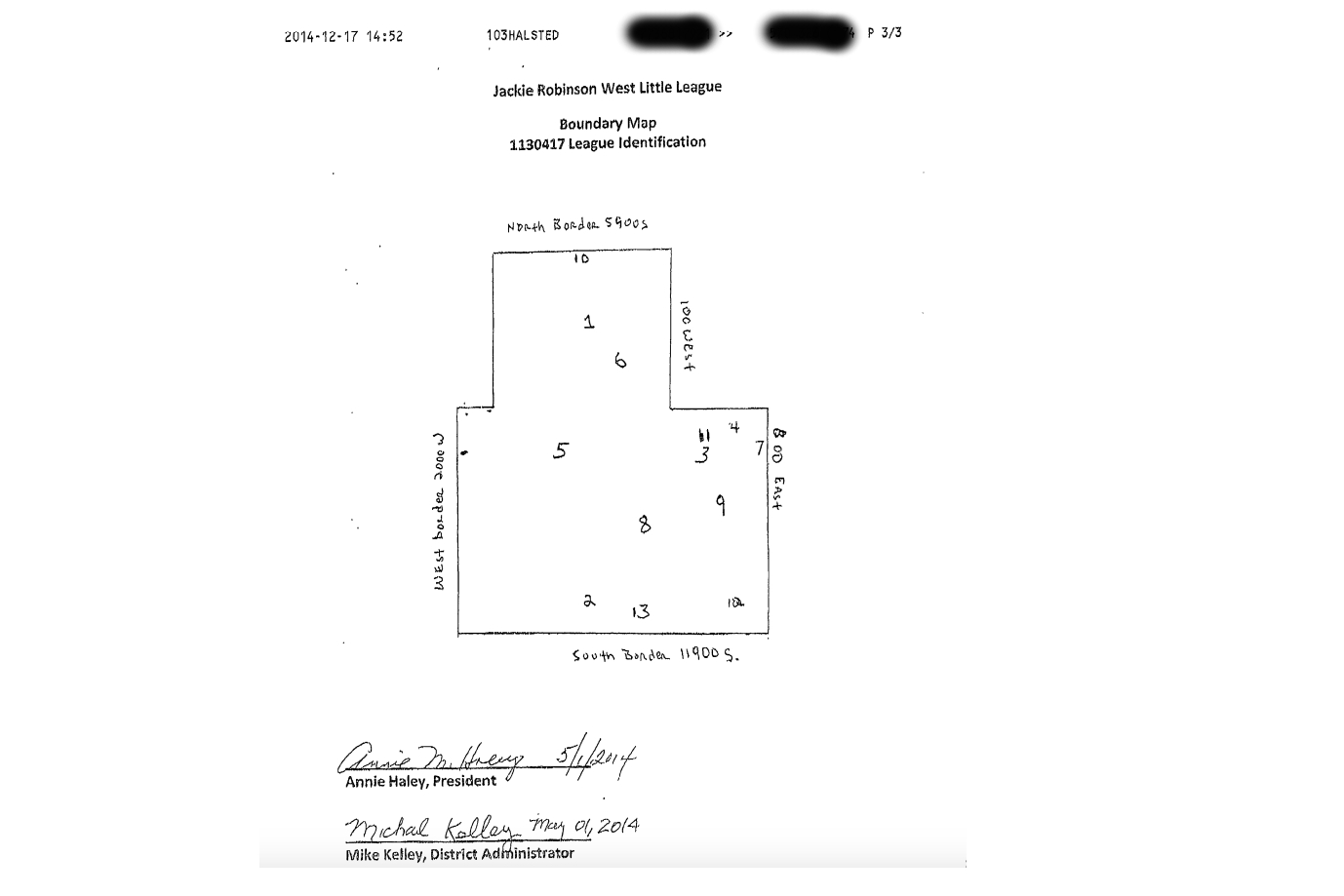 “JRW again expanded the eastern boundary — this time to '800 East' — so that the addresses for all 13 players set out in the Tournament Affidavit fell within the boundaries,” according to court papers.

In December, a Little League spokesman sent an email to DNAinfo that stated JRW had redrawn its boundary map — which overtook sections of three sister leagues in District 4 — and deemed the “matter closed." That statement was included in a Dec. 23 story published on DNAinfo that included information from sources claiming league presidents within District 4 didn’t give permission for JRW to expand its boundaries and were unaware of those changes.

In court papers, Little League cited that story as the “the first time that [Little League International] was aware that such a claim had been made” and set up a meeting with Jackie Robinson West’s leader Bill Haley, District Administrator Michael Kelley and officials from other leagues at the Chicago Hilton on Michigan Avenue on Jan 29.

According to the court papers, Little League claims the following facts were established at that meeting:

• On several occasions, Haley and Kelley met with other District 4 league presidents in attempt to persuade them to retroactively agree to boundary changes to cover up the use of ineligible players in the 2014 tournament.

• The map originally submitted with Jackie Robinson West’s tournament affidavit was accurate and “thus only five of 13” JRW players were eligible to play in the tournament.

On Monday, Little League’s attorney said, “We have no further comment beyond what was said in the brief.”

Henderson responded Tuesday with a prepared statement that suggested the South Side league may continue its legal fight.

"Through its recent legal filings, Little League has chosen to be deceitful and dishonest by withholding material and critical information. Instead of taking a transparent and honest approach, Little League is acting like a corporate conglomerate doing everything it can to protect its image and financial interests," Henderson wrote.

"This is a travesty, especially because little kids are the ones who are taking the brunt of their tactic.  Legal disputes, just like baseball games, don’t take place in one inning. For now, I simply encourage everyone to be patient. The game is far from over.”

Little League’s court filing also shed light on what might be the biggest slight felt by Jackie Robinson West leaders and players' parents who openly and repeatedly complained that they learned about the title being stripped through news reports.

After making the decision to strip the title, Little League gave a heads up to just three organizations — ESPN, Major League Baseball and President Barack Obama’s administration. They were the first to know about the decision to strip the title with an “express directive that the information … was embargoed and could not be made public until 10:30 a.m.” [Eastern Standard Time] on Feb. 11.

“Unfortunately, ESPN did not respect this directive and announced the discipline” two hours earlier before Little League was able to contact JRW officials with the bad news, according to court documents.