BUCKTOWN — A Bucktown homeowner wants The 606 organizers to remedy what he says is a design flaw that has allowed only one one foot of space between his balcony and the public trail, as well as a stall-like space that he says could invite loiterers and "peeping Toms."

"About five months ago I was worried it might be the perfect spot for a hobo to sleep in, but thankfully that hasn't happened. Now I just call it the horse stall," said Mike Runkle of the 8-foot-long by 4-foot-wide space created by 606 fencing in front of his balcony.

Next to a viaduct, the stall is behind a fence that divides trail goers from homes along the 2.7-mile long path which runs through Bucktown, Wicker Park, Logan Square and Humboldt Park. The trail is an elevated oasis as well as a highway past living room, kitchen and bedroom windows.

"The workers admitted [to me] that it was a mistake. They used an AutoCAD [software] program so the design is all the same, all along the trail," Runkle said.

Alisa Hauser says Runkle doesn't want a tall fence, but has an idea:

A spokeswoman for The Trust for Public Land confirmed on Friday that all of the bridges along the trail have the same configuration of a guardrail, including the setup in front of Runkle's home, which is part of a condo building in the 1700 block of North Wolcott Avenue.

After going up and down the trail, DNAinfo Chicago confirmed that there is a guardrail "stall" over all of the viaducts, though no home or balcony was as close to the guardrail as Runkle's. 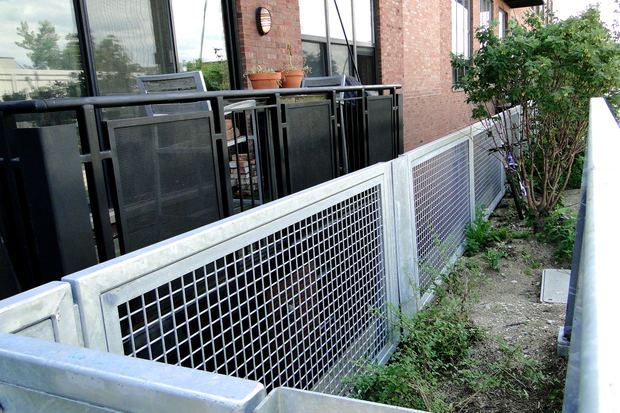 Runkle's condo association voted for a 4.5-foot-tall fence instead of a 10-foot-tall privacy fence.  (All photos by DNAinfo/Alisa Hauser) 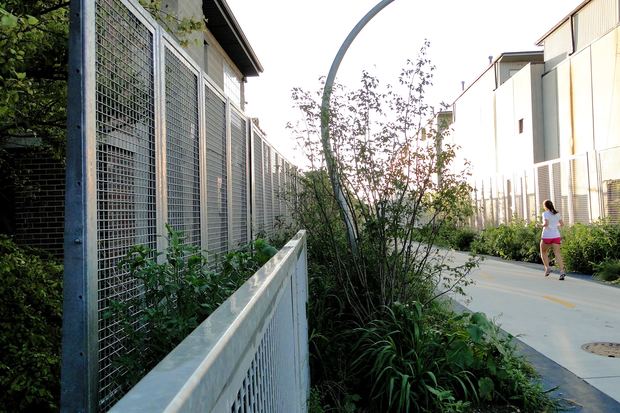 An example of a "horse stall" or safety guardrail at a different viaduct where a 10-foot-tall privacy fence blocks views of homes.

In mid-June and mid-July emails, Runkle asked officials from The Trust for Public Land to plant more shrubbery such as a tall tree.

"I am wondering who I might contact to request installing another shrub(s) to reduce the number of peeping toms.  Can you please help?" Runkle wrote on July 19.  A month before that, Runkle wrote, "A surprising number of people just stand there and stare in — and the girth and density of the shrub would be a big help."

Though Runkle received a reply on June 20 from a member of The 606 Team indicating that his email would be forwarded to a Trust for Public Land official who would "review with the construction team again tomorrow and get back to you," Runkle said as of Monday, Aug. 3., he has gotten no reply.

On Friday, a spokeswoman from the Trust for Public land referenced back to a lengthy design process that involved homeowners along the path.

“Project planners worked with property owners along the trail — including the condo board of  [Runkle's building] — to determine which privacy features they desired. The board at this building opted for the standard 4’ fence. For additional privacy, the plans also include forsythia planting, bushes that will reach 6’ or higher when mature," the spokeswoman said.

Runkle confirmed that he and the other five property owners in his building who have 1st and 2nd floor units were all okay with the plans as presented before the trail opened but used the analogy of being not quite happy with a haircut.

"If you want a haircut a certain way and it's not right, you might ask for a few modifications. I am not complaining. As a gesture of goodwill for those who are very much affected by [the trail] it seems they would be able to make this change," Runkle said.

When his window are open, Runkle can hear people talking as they walk, jog and bike past.

"They say look, I can jump up there, or that place looks cool. If I am looking out the window it is awkward to be making eye contact with people," he said.

When asked if he would prefer a taller privacy fence to the shorter one, Runkle said he wants to keep the short fence.

A fan of the trail, Runkle, who uses it at least four times weekly, said he had never been "west of Western" when not in a car or on public transit and now that the trail is open, he is exploring new neighborhoods on foot and bike.

Around 6:30 a.m. Monday, Caroline Christy, a Streeterville resident, was one of dozens of people using the trail. Christy called the trail "the second best option to the Lakefront path."

Christy said that she and her boyfriend sympathized with property owners.

"Who knows if when they bought their place they knew this would be here. I can understand if there are [privacy] issues now," Christy said. 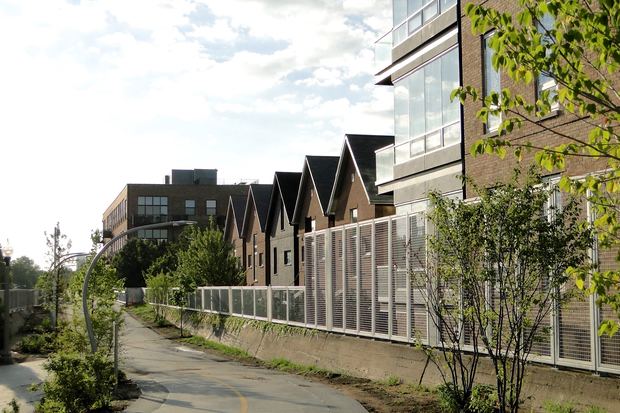 Short and tall privacy fences side by side in Bucktown.