How Gatecrashers Sneak Into Lollapalooza: Security's Tight, But Fans Crafty

By Mark Konkol |&nbspJuly 30, 2015 7:38am
@KonkolsKorner
Twitter Facebook Email More
Want to sneak into Lolla? It's not as easy as it used to be.
View Full Caption
Getty Images/Jeff Gentner

CANARYVILLE — Every year without fail, Lollapalooza fence hoppers and an assortment of wristband-swapping conmen try to sneak into the Grant Park music extravaganza for free.

Over the years, I’ve seen flash-mob style fence-jumping operations in action, a blur of athletic college kids who furiously claw their way over chain-link barriers, sprint away from security guards and, if they’re lucky, disappear into a sea of dancing bodies in front of stages or an especially long port-a-potty line.

This can be a dangerous game.

Chicago rapper Vic Mensa told MTV News about the time he nearly died trying to sneak into Lollapalooza in 2012 by scaling a bridge only to brush up against a live transformer, fall to the ground and wind up in the hospital under police custody.

A few folks who’ve confessed to me their gate-crashing sins of their past escaped arrest — and yes, the police will arrest you — only to limp away with sliced open skin and even broken bones.

One sneaky Lolla scofflaw who matured into a well-respected professional told me she still lives with the guilt of being the kind of young degenerate who willingly participates in elaborate conspiracies — passing wristbands to pals outside, distracting security guards and taking advantage of distracted security guards — to get into the show for free. 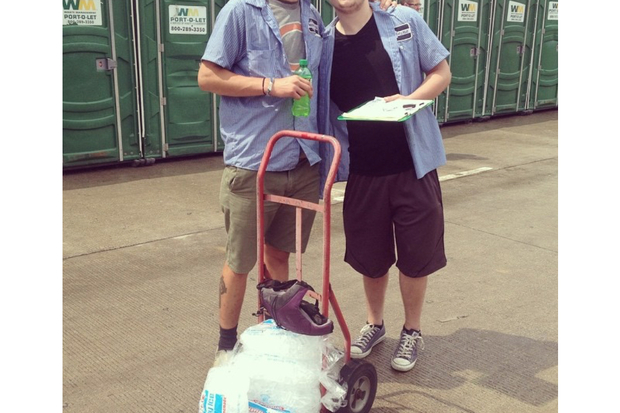 And that has inspired at least a few evil geniuses to unleash a new breed of Lolla sneak attacks that, along with flash-mob fence jumping, I do not endorse.

Last year, young gatecrashers who became known in Twitter infamy as the Lollapalooza “Ice Men” concocted a scheme that successfully got them into the concert undetected and, according to Twitter legend, saved a young lady’s life.

In 2013, one of those guys — a Canaryville scammer — was younger and stronger, so he scaled the Lolla fence and sliced up his leg like a novice. A year older and wiser, he still didn’t want to spend cash on Lolla tickets and came up with a more devious scam.

“It was a drunken idea,” the Canaryville man told me on the condition that I protect his identity.

“I worked for an ice company the summer before and still had the work shirts. So I told my buddy, ‘Let’s pose as ice men and see what happens.' ”

He fetched his dad’s dusty dolly from the basement and headed Downtown with his partner in crime to pick up Lolla supplies necessary to gain entrance to the Saturday show.

“We went to 7-Eleven and got six bags of Home City ice, just six … and stopped at Walgreens to buy a clipboard,” the Canaryville mastermind said. “The clipboard really came in handy. We got some paper and wrote some stuff on it to make us look official.”

They hiked down Michigan Avenue to a Lolla service gate near Balbo and encountered a security guard.

“My buddy did the talking,” he said. “He told the guy, ‘We had to park our truck down the street because there’s lots of traffic, you know. And we gotta get these bags of ice to Willie,’ or some bull---- name, ‘before they melt.’ The security guard didn’t know what to do so he just let us in.” 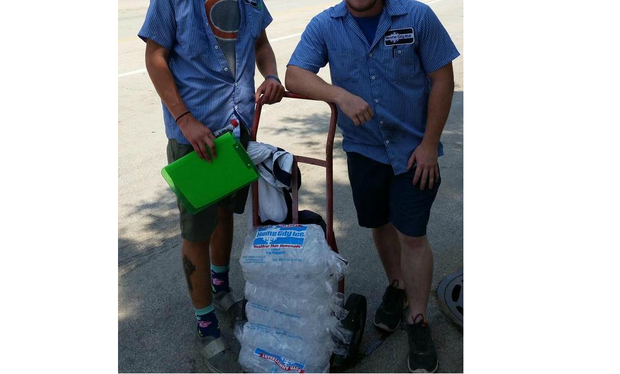 The Ice Men dollied their store-bought ice bags to a secluded area behind Perry’s DJ stage.

Before ditching the ice, stashing the dolly and work shirts and slipping into a port-a-john to change into festive concert attire, the Ice Men posed for a picture tweeted by a local sports blogger.

“The Stoolies that dressed as ice delivery guys to sneak into Lolla are absolute legends,” @BarstoolBigCat tweeted.

When their free day at Lolla came to an end, the Ice Men hiked past the spot where they ditched their stuff.

“The dolly was still there so we got to take it back home with us,” the lead Ice Man said. “And we found out that there was this girl [dancing at the Perry stage] who was about to pass out but her friends found the bags of Home City ice and cooled her down. One of my buddies ran into the girl’s friends the next day and she told him to thank us because that ice saved her friend.

“So, we got into Lolla for free and we saved a life. Not bad.”

It was such a good scheme that the Canaryville guy with access to his dad’s dusty dolly called up a different friend to give the ice-delivery trick another shot … and it worked, again.

This year, he told me he’s retired the “Ice Men” scam.

“But you know, we want to go to Lolla this year, too, but don’t want to spend the money,” he said, pausing for a moment. “So, we're talking about doing something new.”

That didn’t surprise me one bit.

It’s the kind of thing that happens every year, without fail.