Grant Park Conservancy President Bob O'Neill told a packed house Tuesday at Northerly Island that negotiations toward a dog ban compromise at the new Downtown park are looking more promising than ever. A deal has yet to be struck, but O'Neill said talks are headed in the right direction.

"It should be worked out," O'Neill said via e-mail. "The Chicago Park District is still working on it."

The latest proposal, unveiled at Tuesday's Grant Park Conservancy meeting, would let dog owners cut through Maggie Daley Park on the sidewalk just west of the Cancer Survivors Garden before winding alongside Lake Shore Drive. The route would allow dog owners — who currently must take Lower Columbus Drive or other detours — through the park from Randolph to Monroe streets. 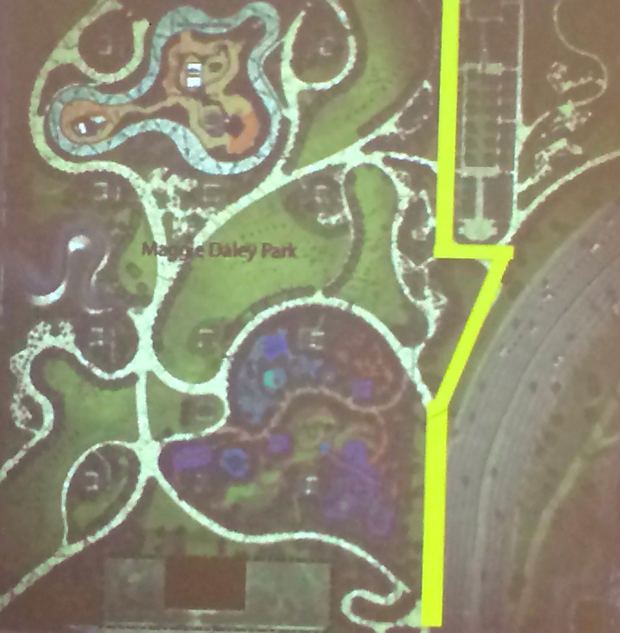 The proposed route is highlighted in yellow. [DNAinfo/David Matthews]

The ban, which some neighbors viewed as a broken promise, has been a contentious issue at Downtown parks meetings since it was announced late last year. Millennium Park, which is owned by the City of Chicago, also enforces a dog ban. Jessica Maxey-Faulkner, a spokeswoman for the Chicago Park District, said the park district's position on the dog ban "remains." O'Neill's conservancy is an influential parks group that produces events and programs for Grant Park and surrounding areas, as well as offer input on park initiatives.

Though the proposal would be merely a compromise, it's welcome to South Loop resident Pamela Focia, a member of the Support Chicago Dogs movement. Though the dog ban doesn't affect her that much personally, it's a "matter of principle" that keeps her lobbying for dog access to Maggie Daley Park.

"It sets a precedent for future projects," she said. "Having something is better than nothing."

How Should Ald. Garza Spend $1 Million In 10th Ward? Here's How To Weigh in