Where's Water on the 606?: 2 More Fountains Coming to Bloomingdale Trail

WICKER PARK —  With temperatures finally in the 80s, knowing where to find water along the 2.7-mile-long Bloomingdale Trail is becoming an important task for those eager to use the park's seven water fountains.

"I noticed the lack of water or any kind of drinks if you get thirsty," said Scott Venable, pastor of Wicker Park's New City Church.

On Wednesday afternoon, Venable organized a group of 12 visiting missionaries who passed out 224 bottles of water in just under three hours, a blessing that came with "no strings attached or literature," he said.

"Part of our church mission is to show God's love in tangible ways. People were just grateful to have the water," Venable said, adding that he got the idea after using the trail with his family and having to get off the trail to buy water at a Walgreens.

RELATED: See Our Interactive Map and Guide to the 606

On Monday night after biking the trail, Norman Tomaneng was drinking water from a fountain at Walsh Park. Tomaneng said he witnessed a boy pass out from apparent dehydration earlier this month.

"He just fell off his bike.  The dad was giving him water and there happened to be a nurse on the trail that came by to help, and then a group of three women that were jogging, they were all nurses, too. The kid was okay but he was lucky," Tomaneng, a respiratory therapist, said of the incident.

Alisa Hauser says the water spots are very limited on the trail:

Tomaneng said his girlfriend, wanting to help, ran to get water at the nearest fountain and she ended up having to go a quarter mile west, to the very end, where there is a fountain at the base of the trail.

"There should be more water on the actual trail," Tomaneng said. 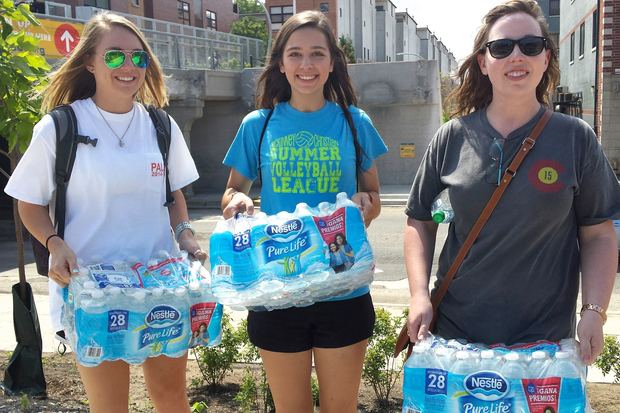 (from l.) Emily, Caroline and Katie, Texas-based missionary workers hauling water up the Churchill ramp to give away to trailgoers on Wednesday. [Photos by DNAinfo/Alisa Hauser unless noted]

There are two water fountains on the trail and five other fountains below in ground-level parks that are part of The 606, a system that is named for the first three numbers of the zipcode all Chicago residents share.

The estimated $95 million park system opened to the masses on June 6 and has been attracting droves of people since, eager to walk, jog, skateboard, bike, scoot and enjoy the elevated Bloomingdale Trail, an oasis above the commotion of the city.

Within the next couple of weeks, two more water fountains will become available, bringing the tally to nine.

Both of the two new fountains — one on the southern side of Walsh Park on the trail's eastern end, 1722 N. Ashland Ave. and in Walsh Dog Park — will be open once some fencing and landscaping work is finished, said a Trust for Public Land spokeswoman, the city's public-private partner tasked to manage the project. 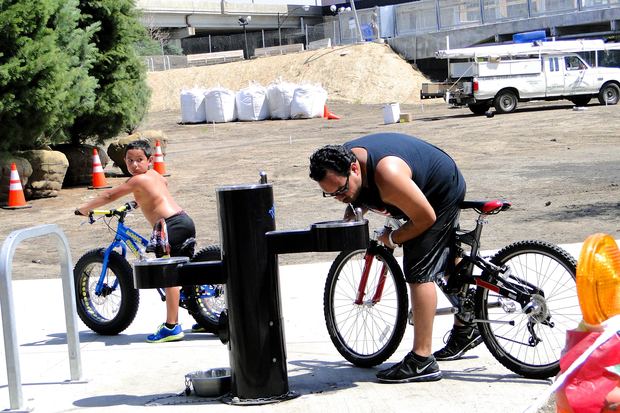 Tinley Park's Ruben Herrera takes a drink at Walsh Park's fountain, as his son waits. "We stop at every fountain to get a drink; glad it is here. We did [the path] three times today. This is our first time here; it's my day off. It's a nice park and very clean, " Herrera said. 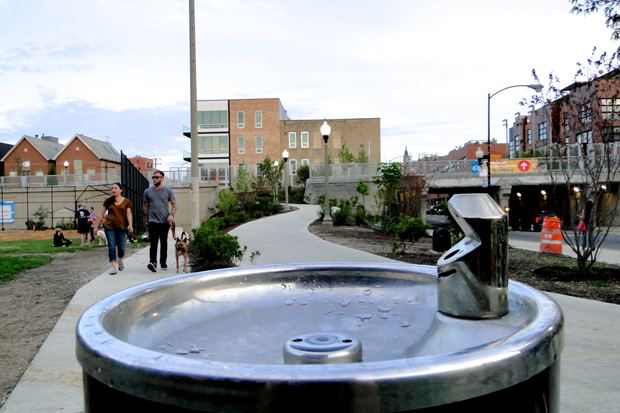 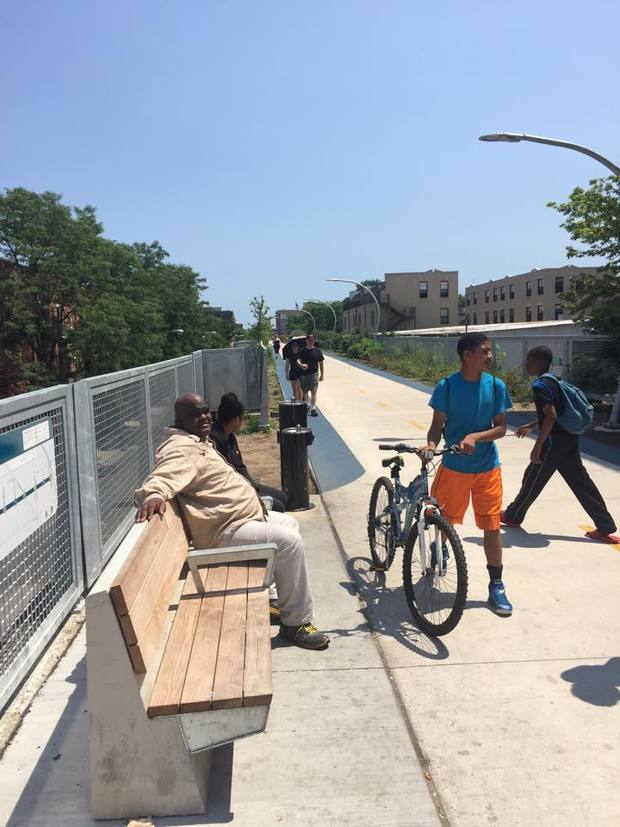 Water fountain on the trail at Rockwell. [Elizabeth Fine] 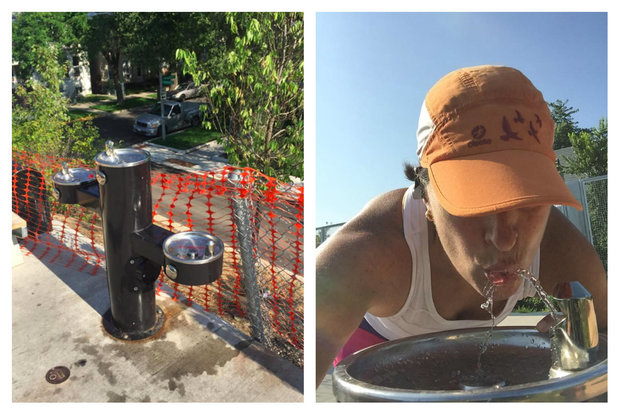 Elizabeth Fine said she runs three times a week on the trail, which has become her new and closer alternative to the lakefront path. "Given that I spent nine years without any water fountains in the neighborhood, I'm thrilled that there are fountains at all. Maybe there could be one on the trail itself between Western and Ashland, but it's still great to have any at all," Fine said. 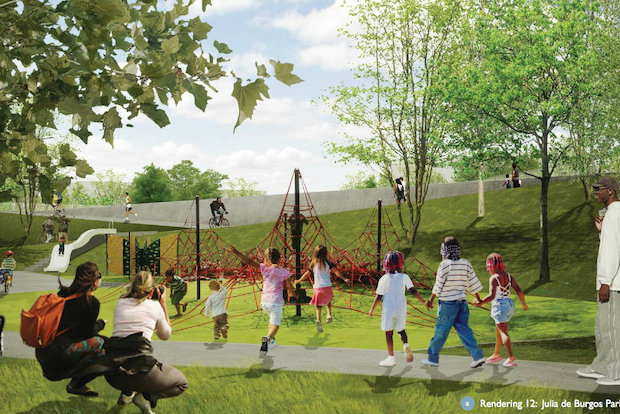 A rendering of Julia de Burgos Park, which has a water fountain [The606.org] 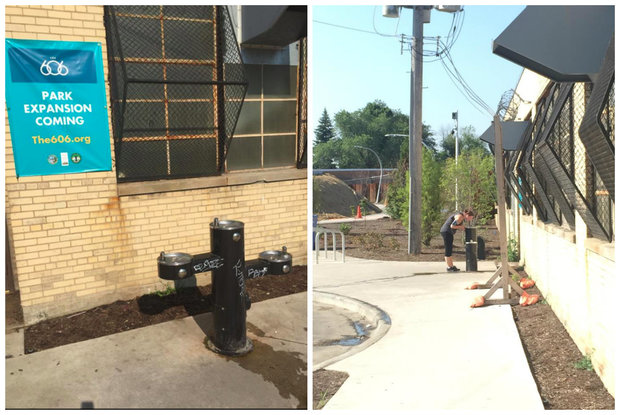 Marie Rivera, a Humboldt Park resident, was surprised by the lack of water fountains on the trail and carries bottled water with her when she walks or jogs. [Vine/Alisa Hauser]