SOUTHPORT — During a tense, and at times unruly meeting, neighbors blasted what they called "bait-and-switch" tactics from a not-for-profit company seeking to open a substance abuse recovery home on Lakeview's west side.

Repeatedly, they asked: Why move into a neighborhood that doesn't want you? 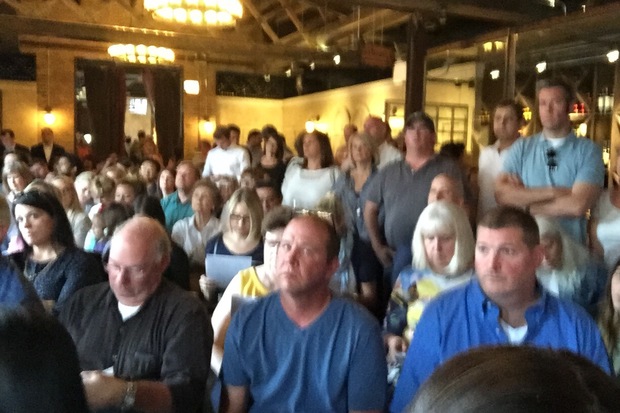 But as Rosecrance CEO Philip Eaton pointed out, opposition to recovery homes and the "not in my backyard" mentality is expected no matter where they're proposed.

"You assume another neighborhood wouldn't have a similar meeting with someone like you at that same meeting?" Eaton asked neighbors. "We were intentional about trying to find a neighborhood with good transportation and opportunities to go to school and get jobs while having a safe community as well."

Ariel Cheung says the meeting was so heated it was almost shut down:

Ald. Tom Tunney (44th) has promised residents will have plenty of time to sound off after at least 50 were turned away from a packed meeting Wednesday designated for immediate neighbors of 3701 N. Ashland Ave., where Rosecrance Lakeview would treat young adults 18-26 years old recovering from drug and alcohol addiction.

"Our objective is to make sure residents know what the request is. There is a lot of rhetoric, and some of it is true, some is half-true, and some is not true at all," Tunney said, alluding to fliers that were circulated before and during the meeting.

How it all started

Two weeks ago, Rosecrance filed for a special-use permit to allow the upper floors of the building —now under construction — to be used as transitional living residences for about 30 young adults, with a counseling center on the first floor. 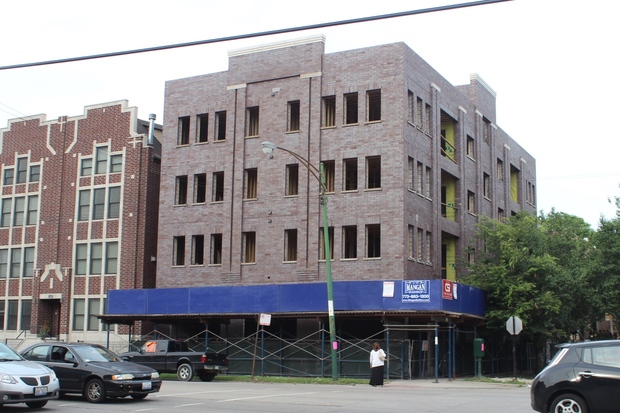 While the northeast corner of Ashland and Waveland avenues was rezoned for mixed use in 2013, it wasn't until this spring that Rosecrance, a Rockford-based addiction services organization, got involved. No zoning allows for transitional living residences, which is why Rosecrance is seeking the special-use permit, 44th Ward Chief of Staff Bennett Lawson said.

Although Tunney postponed the Zoning Board of Appeals hearing beyond its original August date, neighbors Wednesday said they felt the sudden change left them in the dark.

"This was thrown on us in a bait-and-switch by the developer, and that's why everybody is so angry. [Rosecrance] had a ton of time to prepare, and we have had none. This is the most stressed I've ever been in my entire life," said Aaron Eiger, who lives in the 3700 block of North Bosworth Avenue.

Neighbors angrily interrupted both Eaton and Tunney, who fought for control and insisted attendees not "demonize" the Rosecrance representatives. One resident vowed he would not vote for Tunney in 2019, while another threatened legal action to "shut down" the center.

Tunney said he had not taken a stance on the proposal, but preferred to let the decision rest with the zoning board.

"I'm an alcoholic. I'm a recovered drug addict. I have walked this road. This is a need in your community. You may not be aware of it directly, but there are people out there who need this," he told fellow Lakeview residents, who applauded him.

It was thanks to an urban residential facility like Rosecrance that Tim, who asked his full name not be used, was able to get sober when he was 23 years old. He now volunteers at another Rosecrance facility and begged neighbors to keep an open mind about the people who are seeking the same chance at a new life that he got. 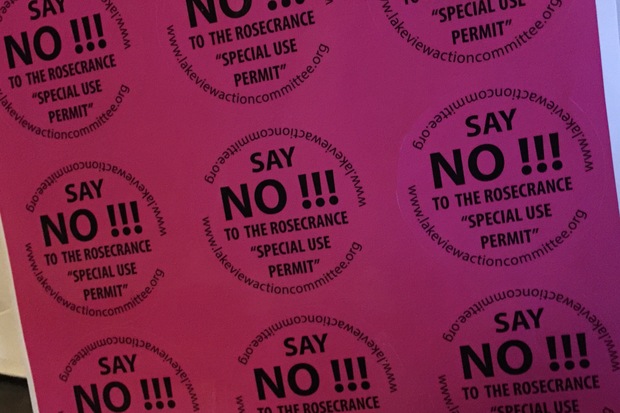 But parents fearing for their children's safety and residents worried the center would draw crime to the area were not convinced. The Lakeview Action Committee, formed in opposition to Rosecrance Lakeview, passed out fliers and stickers to meeting attendees listing decreased property values, increased loitering and parking congestion as reasons to "say no."

If drug dealers know there are recovering addicts in the area, "They know where to go to find their customer. If I'm a drug dealer, I'm going to hang out here and find that person and sell drugs to them,"  business owner Mark Mitchell said. "That's a reality."

Rosecrance pledges to be good neighbor

The center would have 24-hour staff on site to enforce strict nighttime curfews between 8 and 11 p.m. Residents would be drug tested at least twice weekly, with violations "likely" resulting in their eviction, Eaton said. 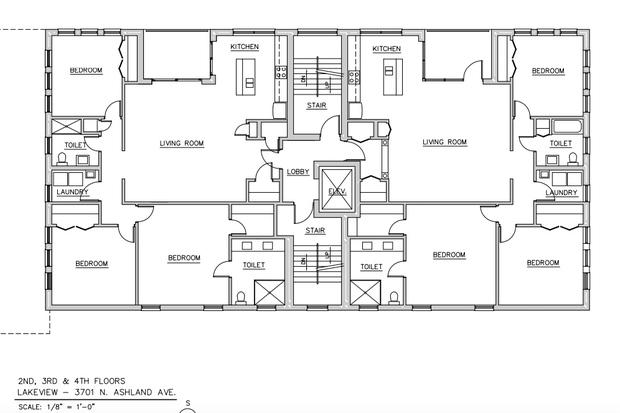 A proposed substance abuse counseling center and recovery residence at 3701 N. Ashland Ave. would house about 30 residents for up to 1½ years, with four or five per apartment. [Provided/44th Ward]

Those with severe mental illness and violent or sexual criminal convictions would not be accepted into the residential program, and only preapproved family members would be allowed to visit. Two-thirds of the client base would come from Chicago and its suburbs.

Five parking spaces in the rear of the building would be used for staff or visitors, as residents will not be allowed to have vehicles. Smoking and loitering outside the building also would be "strictly prohibited," although residents could be allowed to smoke on the roof patio, Rosecrance said.

After the initial 1½-hour meeting, the proposal will be discussed again during the Southport Neighbors Association meeting at 7 p.m. Monday. Due to the unexpectedly large turnout for Wednesday's meeting, organizers said they would likely find a larger venue than the Music Box Theater lounge, which normally hosts the meetings.

Rosecrance operates more than a dozen treatment facilities in Illinois and Wisconsin, including four recovery homes in Rockford and an outpatient center in Lincoln Park, 2835 N. Sheffield Ave., which would be moved to the new site.