GOLD COAST — Five companies that want to run a small but significant concession kiosk in the heart of the Gold Coast faced pushback from hundreds of concerned neighbors at a raucous park meeting Tuesday.

Contenders for the concession permit at Mariano Park, 1031 N. State St., pitched their plans Tuesday for a spot at the corner of State and Rush streets as longtime vendor Whispers Cafe nears the end of its lease there.

The meeting was held by the Mariano Park Advisory Council, which formed in February to ensure the 6,400-square-foot park remains open and alcohol-free, council president Peter Spiros said. The meeting's purpose was to show neighbors proposals for the site, but it was quickly derailed by the larger-than-expected crowd, which peppered potential vendors with questions about preserving the park throughout their presentations.

"Most of the people here tonight don't care about the coffee or the pastries, we care about the park," one woman told Alamode CFO Steven Steinberg on Tuesday. Another woman who declined to give her name said after the meeting she was "totally embarrassed" by the crowd's behavior.

Ald. Brian Hopkins (2nd) was advised as he entered the hotel that the crowd at the meeting was "feisty and rambunctious." Hopkins, whose ward straddles the park, emphasized that neither he nor Ald. Brendan Reilly (42nd), whose ward includes the park, would approve a liquor license for any new concessionaire.

"I commend you for caring about the park. It's an important part of the community and needs some changes for the future," Hopkins told the crowd Tuesday.

Indeed, none of the five proposals pitched Tuesday included alcohol service or extensive cooking operations. The interested vendors all plan to preserve the kiosk itself, a pavilion built in 1900 and designed by Frank Lloyd Wright protege Birch Burdette Long.

Whispers, run by Nemer "Tiger" Alia, has operated out of the kiosk for 13 years and has left the rest of the park open for seating. Its lease expires in October, and a Chicago Park District committee will choose whether to renew its lease or pick a new concessionaire.

Park District Spokeswoman Jessica Maxey-Faulkner said Tuesday that the decision is expected to be made "by the fall."

That decision will determine who runs concessions in a historic park situated in one of the city's busiest nightlife hubs. Here are five of the people who want that business. 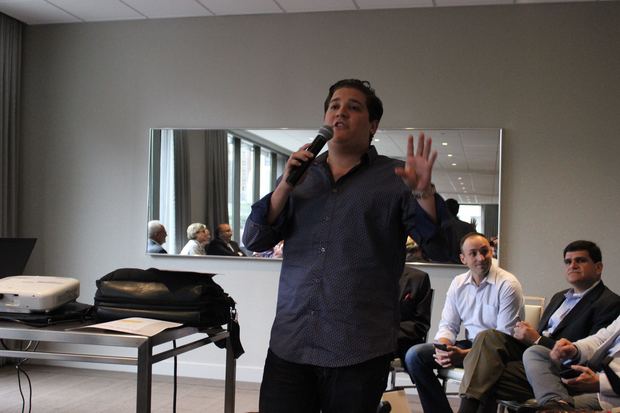 Frank Ruffolo of Franco's Ristorante in Bridgeport. [All photos by DNAinfo/David Matthews]

Frank Ruffolo described his mother's South Side Italian eatery as a "little place with big taste." The restaurant has made appearances at Taste of Chicago and Lollapalooza, and also runs Franconello's in Beverly and Jam 'n Honey in Lincoln Park.

Their kiosk would serve coffee, gelato and cold sweets, like a chocolate and gelato brioche dessert sandwich. Ruffolo believes the restaurant's festival experience prepares it for "efficient service" at the park. 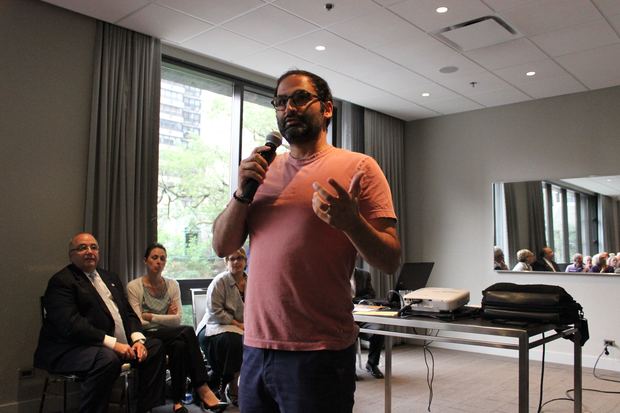 Philip Tadros of Bow Truss Coffee Roasters touted his coffee shop's track record of "building communities," starting with humble beginnings in a  Rogers Park CTA station. Bow Truss now supplies the coffee for the Virgin Hotel and State Farm's Next Door shop, and Tadros said his company could do the same for Mariano Park. He envisions "awesome furniture" and spruced-up landscaping, and would keep the century-old kiosk as is. 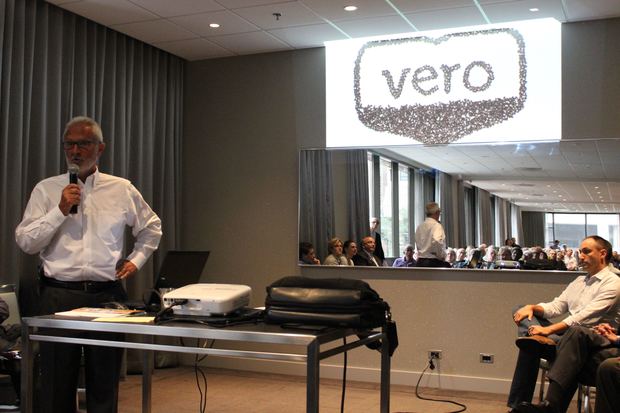 Franklin Park-based Alamode runs Vero, the coffee shops in many Mariano's grocery stores. Alamode CFO Steven Steinberg said the company roasts its own coffee beans and makes its own gelato. Steinberg prepared a video presentation on the brand, but was quickly told by the crowd to turn it off and answer questions about his plans for the park. Steinberg said the company was open to any suggestions and would also leave the kiosk "as is." 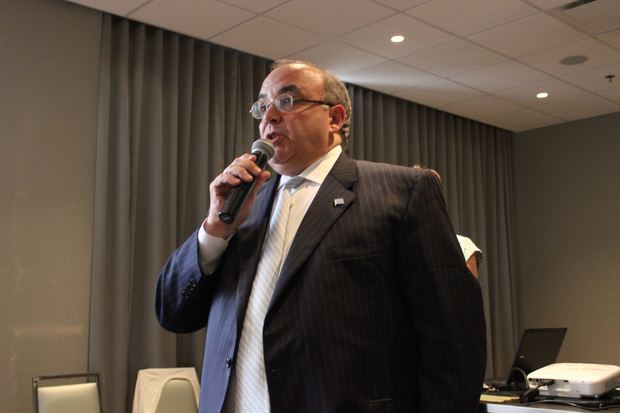 Gibsons, which overlooks the park, wants to run a coffee shop there. The steakhouse proposes moving the kiosk to the other end of the park and building a 10-seat, 400-square-foot "conservatory" that would be open to the public, whether they buy a coffee or not, year-round. The plan also calls for removing the park's fountain and replacing it with a slightly smaller one. 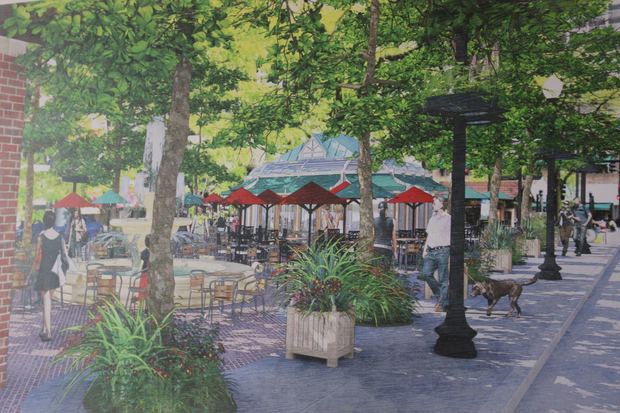 A rendering of the conservatory and fountain. [Antunovich Associates] 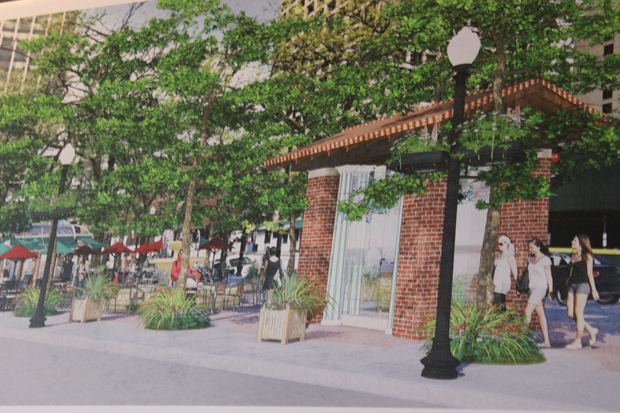 A rendering of the kiosk moved to the north end of the park. [Antunovich Associates]

Gibsons officials reminded the crowd that the steakhouse has been a good neighbor for 26 years, and reiterated that they have an altruistic interest in running the park's concessions. Sara Roberts, a Gibsons executive assistant who presented the steakhouse's renderings, said the restaurant would also be fine with leaving the park intact and ultimately wants the "community voice" to be heard before the park district chooses a vendor.

"We are scared of the Shake Shacks of the world," Roberts said, referring to another kiosk bidder. 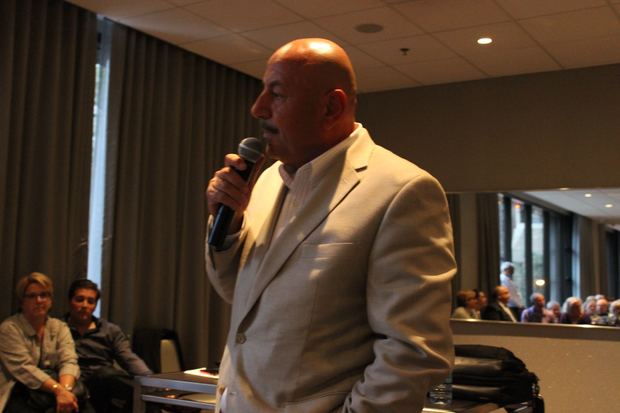 Nemer Alia, the man known as "Tiger" who runs Whispers Cafe, also made his pitch to keep his business in the park after 13 years. He said he plans to make minor repairs like tuckpointing to repair the park's kiosk and fountain, but said he'll do "whatever it takes" to keep his lease.

If he doesn't though, he has a fallback: Pritzker Park, 310 S. State St., where he told the crowd Tuesday he was just awarded another concession permit.

"I don't know what to say now," Tiger admitted Tuesday. "[Mariano Park is] a good spot. It's successful. The whole city wants it."

The contentious meeting ended on a sour note: during a previously scheduled election that was open to the public, attendees at the meeting voted to remove the entire park advisory council board from its positions, including council president Spiros.

"I as President as well as the other board members have remained neutral throughout this process, trying only to get as much information out to the public as possible," Spiros said in an e-mail after the meeting.

"As for the old board, after witnessing the outrageous behavior of many of those in attendance, we are quite happy to no longer be associated with this group."