With No Bloomingdale Trail Bathrooms, Local Businesses Get Flooded

BUCKTOWN —  All along The 606, small-business owners and workers say they are loving the extra foot traffic and droves of people using the elevated 2.7-mile-long Bloomingdale Trail, but for many, the bathroom requests are becoming tiresome.

"We are using between seven and 10 rolls of toilet paper a day and used to use two or three," said Alpash Patel, general manager of Snappy Mobil, a gas station at 1750 N. Western Ave. next to the trail's Western ramp, one of 12 spots where visitors can hop on and off the trail.

"Sometime they buy water or candy; it's OK we are friendly. We understand," Patel said.

The issue of having no permanent bathrooms on the trail is one that Chicago Park District officials have said they are aware of and are monitoring.

In an email statement to DNAinfo Chicago, Beth White, Midwest region director for the Trust for Public Land, added, "Folks are still getting used to the new space and negotiating how to share it. We want to let that process happen organically, but we’re assessing as we go and will make changes as necessary.”

At Churchill Park, there is a portable bathroom intended for construction workers which will be removed soon, 606 organizers confirmed on Thursday.

Earlier this week, at a community police meeting in Wicker Park, one 606 neighbor complained of trail visitors urinating in her yard.

Mark Siska, a filmmaker who lives near the trail's Western Avenue ramp, had just walked out of a portable toilet in Bucktown's Churchill Park at Damen on Wednesday. He said, the trail is "great for our area" but noted the lack of restroom facilities.

"We have been using the trail since day one. It's nice they have [the portable toilet] off the trail. Designwise, it would be cool if there were a built-in bathroom," Siska said. 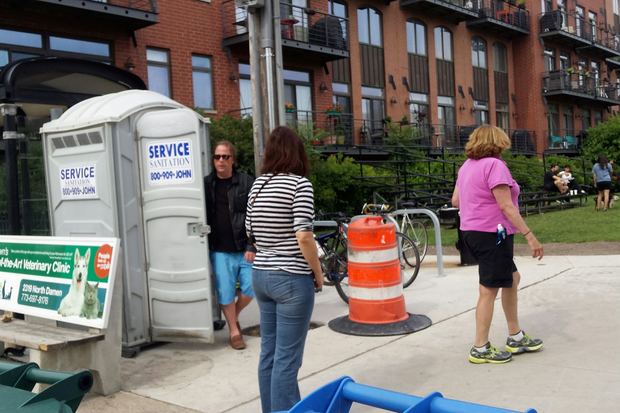 A portable bathroom for construction workers along the 606 that several trail visitors have been using. (DNAinfo/Alisa Hauser)

Melissa Linas, a 34-year-old Bucktown resident walking the trail briskly with her dog, Lucy, said, "I'm 7 months pregnant and have to pee all the time, that is kind of par for the course."

"If I needed it bad enough I would get off the trail and find somwehere," she said.

At En Hakkore, a Korean restaurant across from Churchill Park, co-owner Peter Park said the extra business has been "wonderful," but folks coming in just to try to use the bathroom without being customers "is a hassle."

"I can tell when they are just going to buy a bottle or water or a drink and then try to use the bathroom. Our bathroom is not easy to get through, you have to walk past the kitchen. If they're not customers, we have to say no [to the request], but if it is a baby, or small child, we understand," Park said.

At the Western Avenue ramp, Humboldt Park resident Jaime Wilson and her 9-year-old son, Jose, said they have been riding bikes every night for the last week and never biked in the city before the trail.

"I can hold it, but if my son needed to go, I would stop in anywhere to ask, for him," Wilson said, adding that her husband has been up on the trail more times than she has and told her the lack of bathrooms is an issue.

A staff member from the McCormick Tribune YMCA, 1834 N. Lawndale Ave., at the western end of the trail, said Friday that the YMCA is not offering any bathrooms to trail visitors.

"We were getting over 50 requests a day from people using the trail and walking in here to the Y. Our day camps and children use the bathrooms in our lobby. It was becoming a safety issue and too crowded," the staffer said.