BUCKTOWN — Property owners with a front row view of the Bloomingdale Trail — an elevated path that runs past their homes in Wicker Park, Bucktown, Humboldt Park and Logan Square — came armed with complaints to a Chicago Alternative Policing Strategy (CAPS) meeting on Wednesday.

Sandy Johnson, a volunteer CAPS facilitator and a longtime Bucktown resident who lives near the 2.7-mile long Bloomingdale Trail's eastern end, said with more people coming through the neighborhood, a larger police presence would help.

"Since the 606 opened, there are a lot more people in the neighborhood that we don't know, lots of them," Johnson said.

The topic of The 606, which encompasses five Shakespeare District Police beats along the newly opened trail, took the spotlight at a Beat 1434 meeting attended by 20 residents and three police officers at the Bucktown-Wicker Park Library, 1701 N. Milwaukee Ave.

"A woman allowed her children to pee in my front yard. She looked at me and said, 'I'm sure you don't mind' and I said, 'Yes, I do mind," Johnson said, as several folks laughed.

The issue of having no permanent bathrooms along the trail is one that Chicago Park District officials have previously said they aware of and are monitoring. (Currently, some trail users have been seen using port-a-potties set up for construction workers near ground-level access parks.)

Alisa Hauser talks about why some are unhappy with the new 606 trail:

Another Bucktown resident, who asked to be identified only as John G., said his biggest concern is an unofficial "skateboarding wall."

"There are skate boarders five feet from my pillow," he said.

The ramp wall, which is slanted, is not meant for skateboarding and also poses a danger to people getting on and off the trail, he said.

A woman who lives in the same building as John G. asked about the hours of operation. "I don't think anyone is enforcing the hours," the woman said. The trail's posted hours are 6 a.m. to 11 p.m.

John G. said he called 911 shortly before midnight because he could not sleep due to the sound of the skateboard wheels. 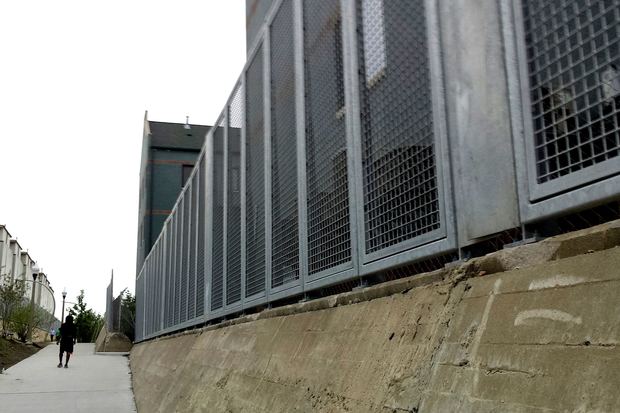 According to neighbors who live next to this wall along the Damen Avenue entry and exit ramp to the Bloomingdale Trail, the structure is being used by skate boarders and posing a danger.  (DNAinfo/Alisa Hauser)

While the police came promptly, John G. said the skaters were already gone.

After the meeting, John G. said he is reluctant to put his head out of the window to tell the skaters to stop because, like others in his large condo building, fear retaliation.

"I don't want them throwing water balloons full of paint at my home," he said.

The man added, "I have been here since 2001 and love the trail." Before it was developed, "it was a quiet green shady spot next to my window."

"I use it now too for walking and jogging, it's great," he added. But, "the difference between this and a park is that there are homeowners with bedrooms literally feet away from this park."

At night the light shines directly into his bedroom, so much so that if he wanted to, he could read a book in bed without turning on a light. He said the "light pollution" has forced him to replace wooden blinds with blackout shades.

"I like Bucktown and plan to stay here. As neighbors of this trail, we need to be attentive. If not then chaos could prevail," he said.

On Thursday, a spokeswoman from the Trust for Public Land, the city's partner tasked with managing the estimated $95 million project, said that the LED lights are designed to pool light on the trail. 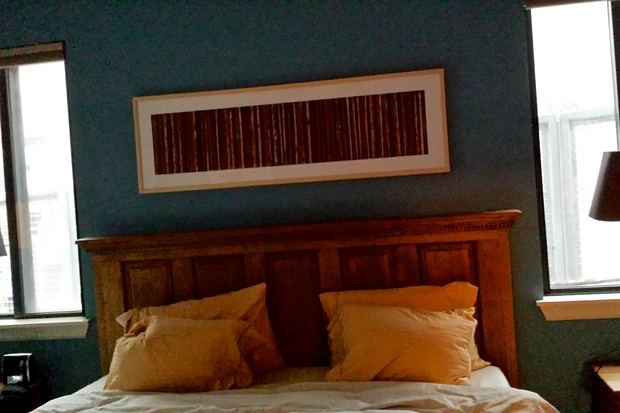 The trail is just a few feet from a Bucktown resident's bedroom window. (DNAinfo/Alisa Hauser)

A third resident said she has used the trail "a teensy bit before 6 a.m." for exercise and has called 911 after spotting a person sleeping on the trail.

Officer Gretchen Chavez, a Shakespeare District beat patrol cop who was leading the meeting, told the  woman to refer to the trail as "the elevated Bloomingdale Trail" when calling 911.

Bonnie Tawse, a community outreach representative for the trail whom has been at CAPS meetings for the past several years and was taking copious notes, said she would look into the matters discussed and get back to residents with answers.

"We are just shy of three week since opening.  It's been great to see [the trail] activated as a democratized space.  Everyone agrees it's a brand new space and people are all learning to live with it and enjoy it," Tawse said.

In an email statement to DNAinfo Chicago, Beth White, Midwest Region Director for the Trust for Public Land, added, "Folks are still getting used to the new space and negotiating how to share it. We want to let that process happen organically, but we’re assessing as we go and will make changes as necessary.”