SOUTH SHORE — It's time to make another Stanley Cup banner to hang in the United Center rafters, and the Blackhawks gotta guy — Carl Porter III.

He’s the fourth-generation owner of WGN Flag & Decorating, the South Side family business that has designed, stitched and hung every single championship banner — and all those retired numbers, too — celebrating Blackhawks and Bulls greatness since the first one got raised to the roof at Chicago Stadium.

“One of my greatest joys is to see those championship banners being made in the sewing room and then going to the game knowing that’s your work hanging up there, seeing people take pictures,” Porter said.

“You look up there in awe because you know what it means, what it takes for the team to make it to the point a banner gets made. And we put that stitching in. … Sometimes I’ll bring in some friends to see it while we put it together … and it’s almost like touching the cup itself.” 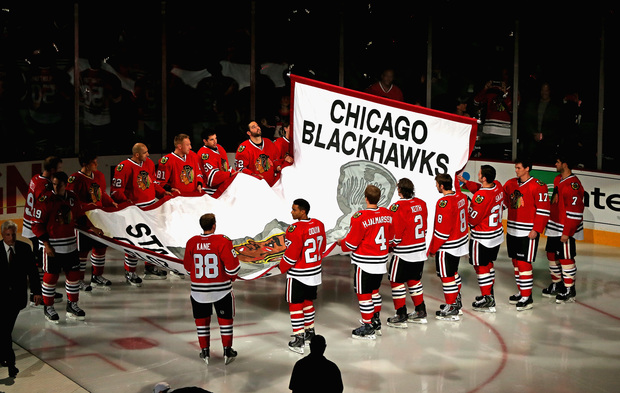 When I stopped by WGN last week, Porter pulled out the giant patterns that they’ll use to put together the third Stanley Cup banner in five years, a symbol marking the Blackhawks as hockey’s newest dynasty.

The making of the banner — the Hawks’ Indian head stitched over the Stanley Cup — is extra special for Porter this year, because he's leading the company founded by his great-grandfather, William George Newbould, during its 100th year in business.

“My great-grandfather started the company after buying a U.S. flag from a street vendor and selling it for twice what he paid for it,” Porter said. “That’s when it hit him that he should start selling flags.”

Newbould was a pencil salesman before starting his namesake flag company, which evolved into Chicago’s unofficial party decorator, among other things.

By his own count, Newbould built more than 12,000 parade floats, used 500 yards of white satin to spruce up the city when Queen Elizabeth visited in 1959 and decorated “everything in sight” for an impromptu parade for Astronauts Virgil Grissom and John Young at late Mayor Richard J. Daley’s last-minute request, according to the Chicago Tribune.

When he died in 1985, a Tribune headline writer dubbed Newbould “Chicago’s decorator” because the 90-year-old “literally decorated Chicago for more than three generations of ceremonies, celebrations and civic events.”

His penchant for tending to all the city’s flag poles and sprucing up Chicago’s celebrations — not to mention scoring handshake deals with clout heavies at City Hall — lived on with his daughter, grandson and great-grandson.

“Before there were contracts, my great-grandfather had handshake agreements, and after a while anything that had to do with flags you knew to come to WGN. It wasn’t even a question. When a big project came up, they called us,” Porter said.

Porter grew up at the flag factory and warehouse at 7084 S. South Chicago Ave. His first job was hawking slightly defected Notre Dame pennants, buttons and foam fingers at Fighting Irish home games when he was about 4 years old. 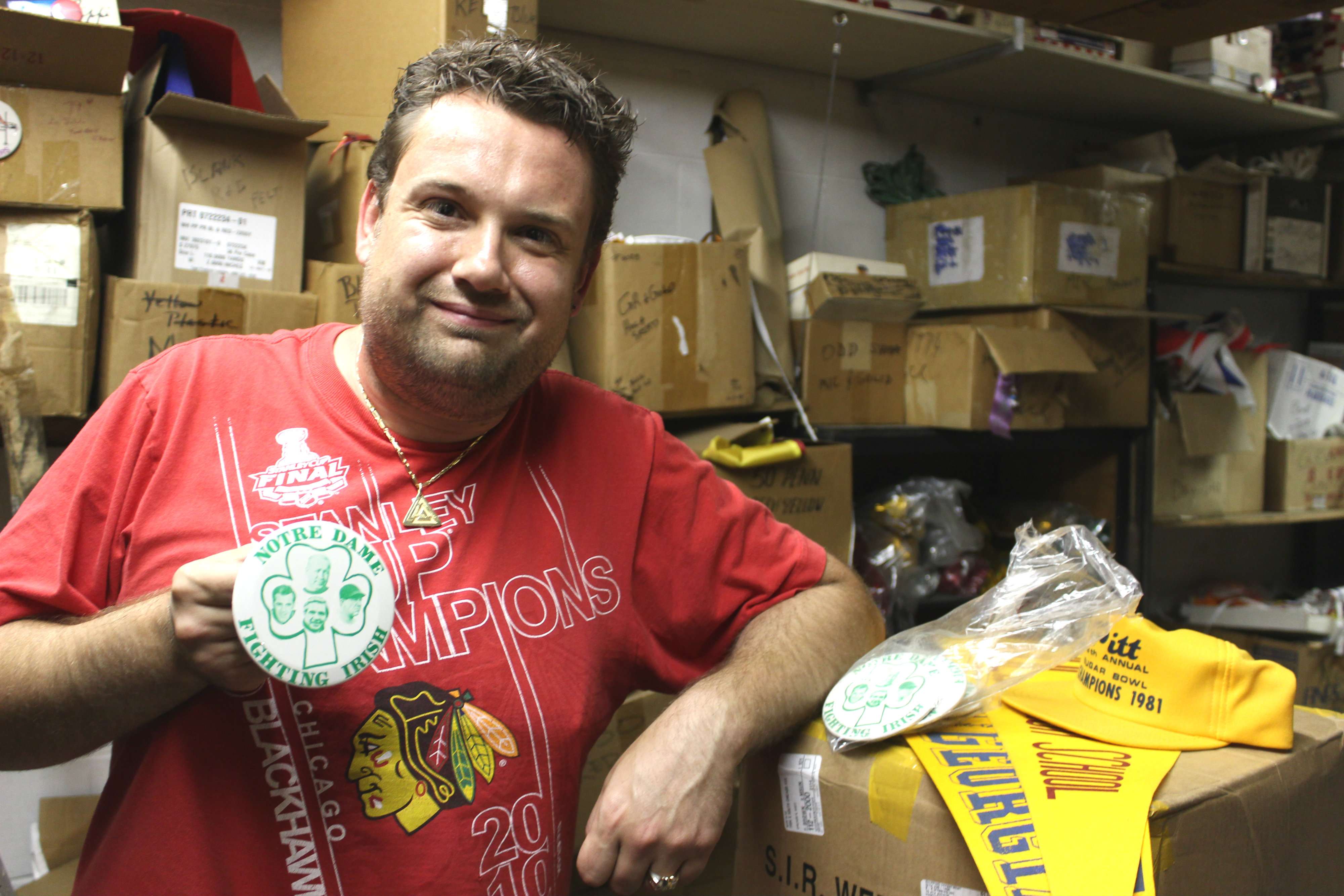 “I guess I had the cute kid appeal to sell that stuff,” Porter said. “Basically, I’ve worked here my entire life. This place was my summer vacation and spring break. If I had down time I’d come down here to play with the security dogs. … I became a sign designer, got into sales and did everything from sweep the floors to go up on skyscrapers to re-rope 100-foot flag poles on top of those buildings.”

Porter took over for his father in 2004 — like he knew he always would because he was “basically bred for the job” — and still has many of the same employees who worked there when he was a kid.

WGN’s head seamstress, Dina Iocco, got hired in 1980 after her husband lost his job when Wisconsin Steel abruptly shut down for good.

“We had little kids. … Two people couldn’t stay home so I had to go to work,” Iocco said. “My neighbor brought me here.”

After a casual job interview with three generations of WGN’s owners, the Italian-trained dressmaker who made fancy ladies clothes at Marshall Field’s before becoming a stay-at-home mom got the family stamp of approval and started work the next day despite having never stitched together a flag in her life.

She still remembers Porter running around the shop as a boy, picking up scraps of fabric on the floor so his father would give him a quarter.

“I used to throw more stuff on the floor so he could make more money,” she said.

Over the last 35 years, Iocco has become an expert at piecing together flags — especially Chicago flags — and banners of all kinds. 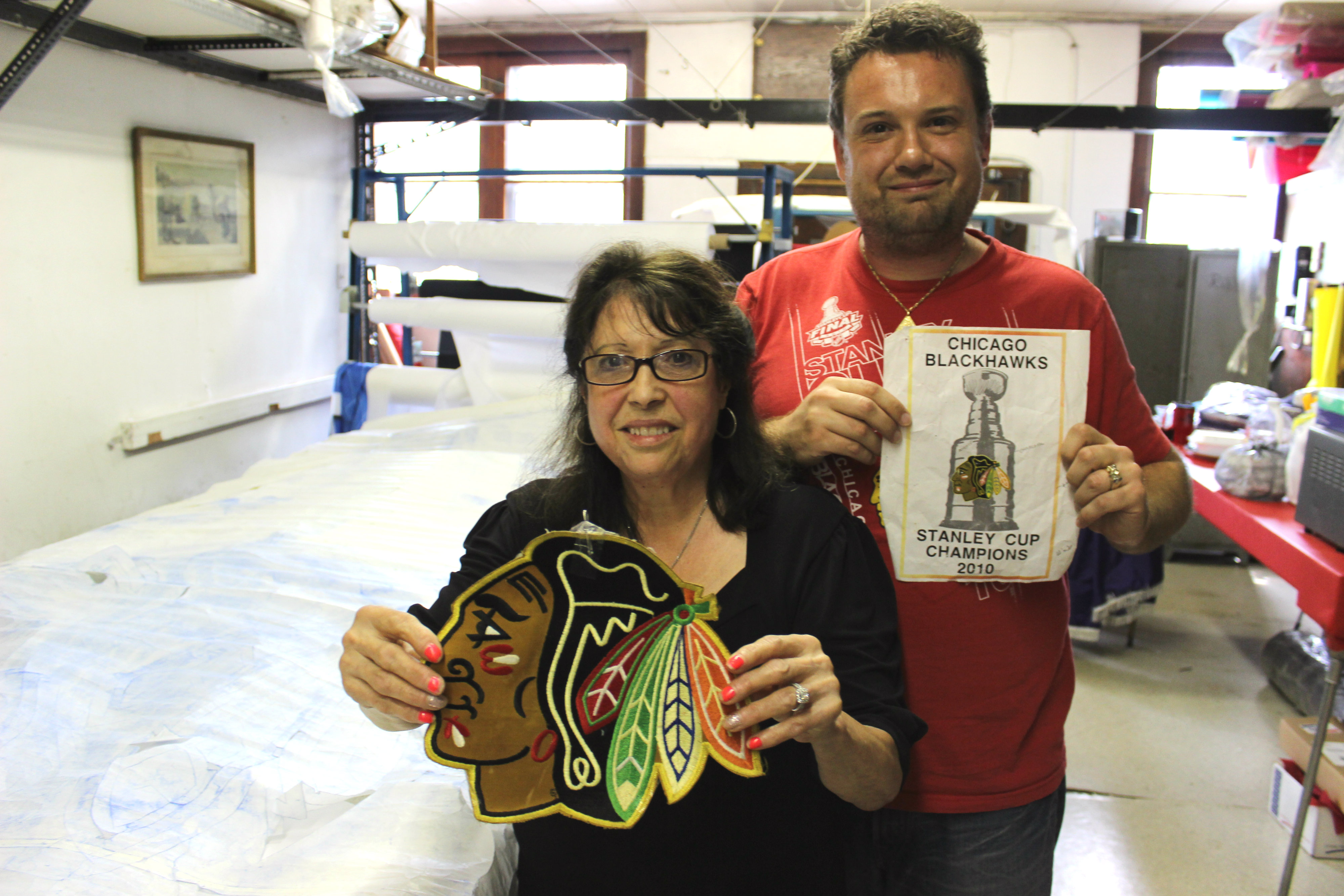 But none of that work compares to the pure joy of stitching together all the banners celebrating Bulls and Blackhawks championships — and the retirement of player numbers, including Michael Jordan’s iconic No. 23 — that hang high above the United Center crowd.

And in the coming weeks, she’ll team up with her boss — the kid who once cleaned up the floor around her sewing table — to create yet another banner celebrating a great moment in Chicago history.

And she’s so glad it’s honoring another Blackhawks Stanley Cup victory — those banners are her favorite.

“It’s a lot of work but it’s so beautiful, a lot of different materials and colors together. I’m excited to see it finished,” she said. “It feels great, and when it’s done I feel so proud.”

For Porter, the work also is a celebration of the family business that survived a century against the odds.

“They say there’s only a 20 percent chance that a family business survives for a second generation, and the success rate drops after that,” Porter said. “Well, after four generations, we’re still right here.”

The 35-year-old says it’s too early to tell if his daughter, Gwenevere, will take over the family business one day.

But he’s holding out hope.

“I’d love for her to be the fifth generation in this chair rather than have the place die with me. So, I’ll do the best I can with this place while I have it,” Porter said.

“My daughter — she’s only 2 — but I’ll tell you what, she already loves flags. Points them out wherever she goes.”