THE LOOP — If you’re one of those Blackhawks fans who shuffled into the office Tuesday suffering from sleep deprivation and a mild Stanley Cup hangover, know this: You were probably in better shape than David Kennedy.

He’s the guy in charge of putting together the “world class” celebration of the Hawks’ third Stanley Cup title in six years ordered up by Mayor Emanuel.

Kennedy didn’t sleep much at all after the Hawks won the Cup because this June monsoon — or whatever you call the weather we’re getting hammered with — turned the parade rallying point in Grant Park where tens of thousands of fans celebrated the 2013 championship into swamp land.

“I was up all night shooting emails. … I had to get on the horn and send more emails at 5 a.m. Tuesday seeing who was awake and wanted to have a conference call about contingencies,” Kennedy said. “I was down at Lower Hutchinson [Field] at 7:30 looking at the conditions and checking the forecast.”

After days of thunderstorms and steady drizzling, a crowd of raucous Hawks fans certainly would destroy the Grant Park sod and that wasn’t an option, not with this weekend’s Dew Tour and more importantly Lollapalooza on tap later this summer.

So, Kennedy scrambled to find a new spot.

He’s got 20 years of citywide celebration planning experience, set up plenty of parades — maybe as many as the self-proclaimed king of all Chicago parades, James “Skinny” Sheahan, though Skinny probably would punch you for saying so — and knows all the best spots to throw a giant party.

Normally, there are plenty of options, including wide-open parks, giant parking lots, stadiums, convention centers and, in a pinch, even a giant intersection or two.

With the clock ticking, Kennedy called the folks at McCormick Place, but that was a no-go.

The intersection of Michigan and Wacker where Chicago celebrated the Hawks’ 2010 championship also was off the table, since police and public safety officials later deemed the canyon of fans in such a confined space created its own safety risks.

The NFL Draft Town site — a stretch of Congress Parkway between Columbus and Michigan avenues — wasn’t viable either, Kennedy said.

“We looked at the United Center parking lots to the north. The acreage there is about as big at [Hutchinson Field] but there’s a concert tonight,” Kennedy said. “And even though you could fit 50,000 or 70,000 people there, they’d have nowhere to run if bad weather runs through.”

And then there was Soldier Field.

“I hate to say that it was the perfect storm, but …” Kennedy said, pausing for dramatic effect, “Soldier Field was in transition from the electronic music concert over the weekend and a soccer match next month. So, we had to make a pretty quick decision.”

After all, this party has a short expiration date.

“I wish I had a couple weeks. It’s just an incredible time crunch and a lot of pressure to pull it off quickly,” Kennedy said. “The players want to get home to their families. I think [Brent] Seabrook’s wife has a C-section planned for Friday. The Cup stays in town for only so long and then it goes. … It’s not a fun rally without the Cup.”

On the plus side, Soldier Field offered the stuff that makes any championship rally better — hot dogs and nachos, that is. Kennedy said concession sales, along with cash parking, will help pick up some of the tab for staffing Soldier Field and turning on the new big-screen monitors.

On the downside, you won’t be able to wash down that breakfast hot dog with a cold one.

My sources say folks who run Soldier Field wanted to give Hawks fans access to a beer for the 11 a.m. rally but, ultimately, Kennedy killed that idea.

“I think slugging beers at 9 a.m. is a little much. Everyone has done some day drinking … but this is a family celebration for a lot of fans and kids,” he said. “Selling beer [in the morning] isn’t necessary.”

The strangest thing about the Blackhawks rally is that you need a free ticket to join the festivities.

It’s not clear whether the city or the Blackhawks came up with that idea. But by Wednesday afternoon all the tickets were “sold” and Kennedy was worried about another potential problem lingering over his head like so many rain clouds.

He told me that he was afraid people who bought tickets online may keep them as souvenirs, then not show up to rally and leave other fans locked out of the stadium.

“So, we’re going to monitor it and see if we have x-amount of tickets that aren’t being redeemed, and we’re going to have to work with [Soldier Field staff] to pull some people in who don’t have tickets,” he said.

“We never want to turn anyone away, and that means at some point we’re going to have to set up additional viewing locations at [Soldier Field] or elsewhere.”

And for that, the Stanley Cup celebration won’t be without at least an element of controlled chaos.

But Kennedy, a Kankakee native who lives in Beverly, says after planning two Stanley Cup rallies, the 2005 White Sox World Series parade and having a hand organizing the Bulls rallies in the late ‘90s, he’s learned to enjoy the craziness of planning it all.

More importantly, he said, his wife Megan cuts him a little slack every time he wakes her up in the middle of the night because another Chicago team wins a world championship. 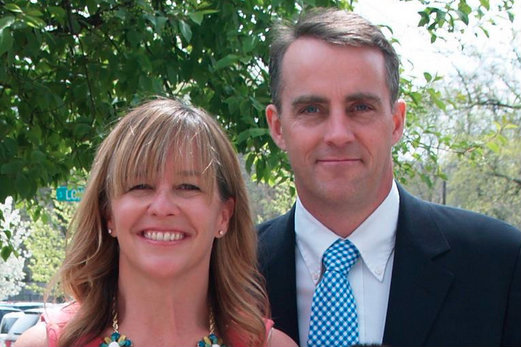 “She’s very supportive. When I get out of bed at 2 a.m. she knows it’s work stuff and that’s what happens,” he said.

“I’m not sure she’s forgiven me this time just yet. … I don’t know if she was able to get a ticket.”