CHICAGO — More than 60,000 tickets for the Blackhawks rally at Soldier Field sold out within minutes Wednesday.

The free tickets went up for grabs at noon Wednesday on Ticketmaster with a limit of four per customer. The more than 60,000 tickets — with about 10,000 on the field — appear to have sold out in less than 15 minutes, though users said Ticketmaster crashed.

A Soldier Field representative said it appears all the tickets were "totally gone" within 15 minutes.

People are already selling tickets online, though the city has said fans should not buy tickets from other outlets.

"We urge fans NOT to BUY tickets from any person or website as only free tickets obtained from Ticketmaster can be verified as valid for entry," the Department of Cultural Affairs and Special Events said in an email. "All others should be assumed to be invalid or counterfeit."

Sign up for our free daily newsletter with news from your neighborhood.

Blackhawks fans unhappy about the quick sellout blasted Mayor Rahm Emanuel on Twitter, and he defended himself Wednesday.

“The normal place we would do it is Grant Park," Emanuel said to reporters Wednesday. "Only you [Jay Levine] and my mother would believe I’m responsible for the rain the other day. It would rip [Grant Park] up in a way that would create and millions and millions of dollars worth of damage.

Illegal ticket sales are already all over the internet:

Welp. Get your Blackhawks rally tickets on Craigslist for $99 pic.twitter.com/ruDyAxI3Gn 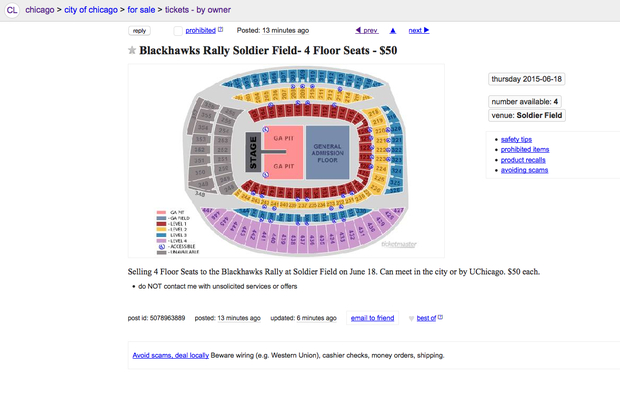 A parade for the Blackhawks begins at 10 a.m. Thursday at Monroe and Jefferson streets. It will run along Monroe to Michigan Avenue, and then the rally at Soldier Field will start.

The party was moved to Soldier Field because conditions are still too wet at Grant Park, where the 2013 rally was held, said city spokeswoman Eve Rodriguez. Soldier Field spokesman Luca Serra said the stadium will install flooring on the field to mitigate damage.

On Wednesday afternoon shortly after tickets sold out, Blackhawks fans started a Change.org petition asking the city to move the rally outdoors.

"Every fan should be able to enjoy the Blackhawks Stanley Cup Rally," the petition says. "The City of Chicago and Mayor have butted their heads into the Rally and ruined it for most. Let's bring this celebration back to the fans and not to ticket scalpers and limited amounts of fans who got 'lucky.' We all deserve to celebrate together!"

The parade and rally are honoring the Blackhawks' Stanley Cup win on Monday.