Assistant coach Kevin Dineen took the Stanley Cup to the race course where for a $10 donation to a charity, people could take photos with it.

The Stanley Cup briefly returned to the Chicago area. Owner Rocky Wirtz shared the Cup with police officers and firefighters in Winnetka, a northern suburb.

The Cup also was a guest at Winnetka's Indian Hill Golf Course.

The subject of a rape investigation, Blackhawks star Patrick Kane canceled a public day out with the Stanley Cup in western New York state and opted to host a private party at his home instead.

Kris Versteeg took the Stanley Cup to his hometown of Lethbridge, Alberta.

The Cup is back in the United States and crossed the Minnesota border.

Ran into Willie the Walleye on the way to the airport (Baudette, MN) #BecauseItsTheCup #StanleyCup @HockeyHallFame pic.twitter.com/Ar9BFpMKwe

Playoff MVP Duncan Keith got two days to spend with the Cup. On the first day, he took it to Belair, Manitoba where it took a spin in a 1962 Corvettte.

On the second day, he took the Cup to Fort Frances, Ontario, where he grew up.

After stopping in Pennsylvania, the Stanley Cup joined defenseman Trevor van Riemsdyk who took the trophy to the Ocean Ice Palace in Brick, New Jersey, where he began his hockey career as a child.

Looks like the Stanley Cup is making the rounds with former Blackhawk players. Now a Columbus Blue Jacket, Brandon Saad shared his day with the trophy at the 911th Airlift Wing in Moon Township, Pennsylvania.

Off to the beach! Patrick Sharp gets help from the kids (Niantic, CT) #StanleyCup @NHLBlackhawks @HockeyHallFame pic.twitter.com/N728HIu8fF

Blackhawks center Antoine Vermette took the Cup to a children's hospital in in Quebec's capital before being honored in the suburb of Saint-Agapit, his hometown.

The Cup made a trans-Atlantic flight to Finland, home country of three Blackhawks: Teuvo Teravainen, Kimmo Timmonen and Antti Raanta. Teravainen got the Cup Monday, Timonen Tuesday, and Raanta Thursday.

After 16 NHL seasons, Kimmo Timonen won the Stanley Cup for the first time this year. He had a chance to take it to his hometown of Kuopio, Finland.

Of course, the Cup was the guest of honor at this year's Blackhawks Convention at the Hilton Chicago, 720 S. Michigan Ave.

"Make sure you get my good side." - #StanleyCup Don't sell yourself short buddy, every side is a good side. pic.twitter.com/0bn0U1cEwv

After a few weeks away, the Cup returned to the Chicago area. The Cup was the centerpiece at a photo session at the First Presbyterian Church in suburban River Forest. Proceeds — which went for a minimum $100 per photo session — went to the church's programming.

A few days after spending time with Corey Crawford, goalie coach Jimmy Waite took the Cup to a hospital in his hometown of Sherbrooke, Quebec.

Captain Jonathan Toews took the Cup to his hometown of Winnipeg, Manitoba. The Stanley Cup served as a spectator at a neighborhood street hockey game before heading to the Dakota Community Centre, where Toews played hockey as a child.

Assistant coach Mike Kitchen took the Cup to a suburban Toronto hospital, treating some children and doctors to some time with the Cup.

After that, Kitchen took the Cup up.

@NHLBlackhawks Assistant coach Mike Kitchen going for a ride in a Helicopter with the #StanleyCup. @HockeyHallFame pic.twitter.com/5OvjGKqShs

Forward Andrew Desjardins hung out with the Cup in his hometown of Lively in northern Ontario.

Forward Andrew Shaw spent the day with the Stanley Cup in his hometown of Belleville, Ontario. He spent the morning with it on a lake before bringing it to town for people to see, including at the local fire department. He also made a quick stop to crash a wedding, where the interruption was welcomed by the very excited bride and groom.

On Canada Day, the Stanley Cup returned to the country to our north. Left winger Bryan Bickell took the Cup to Toronto.

The Cup stopped by Evanston Hospital. Yes, kids were placed inside the Cup.

Katie Michalak's twin boys were born at Evanston Hospital in 2013. This is their second time in the #StanleyCup. pic.twitter.com/zql2ZYQCYt

The Stanley Cup began its player tour, joining backup goaltender Scott Darling in his hometown of Lemont in the west suburbs.

Crowds cheered for Lord Stanley's Cup as it rode in Chicago's Pride Parade with WGN Radio after an invitation from the Chicago Gay Hockey Association. 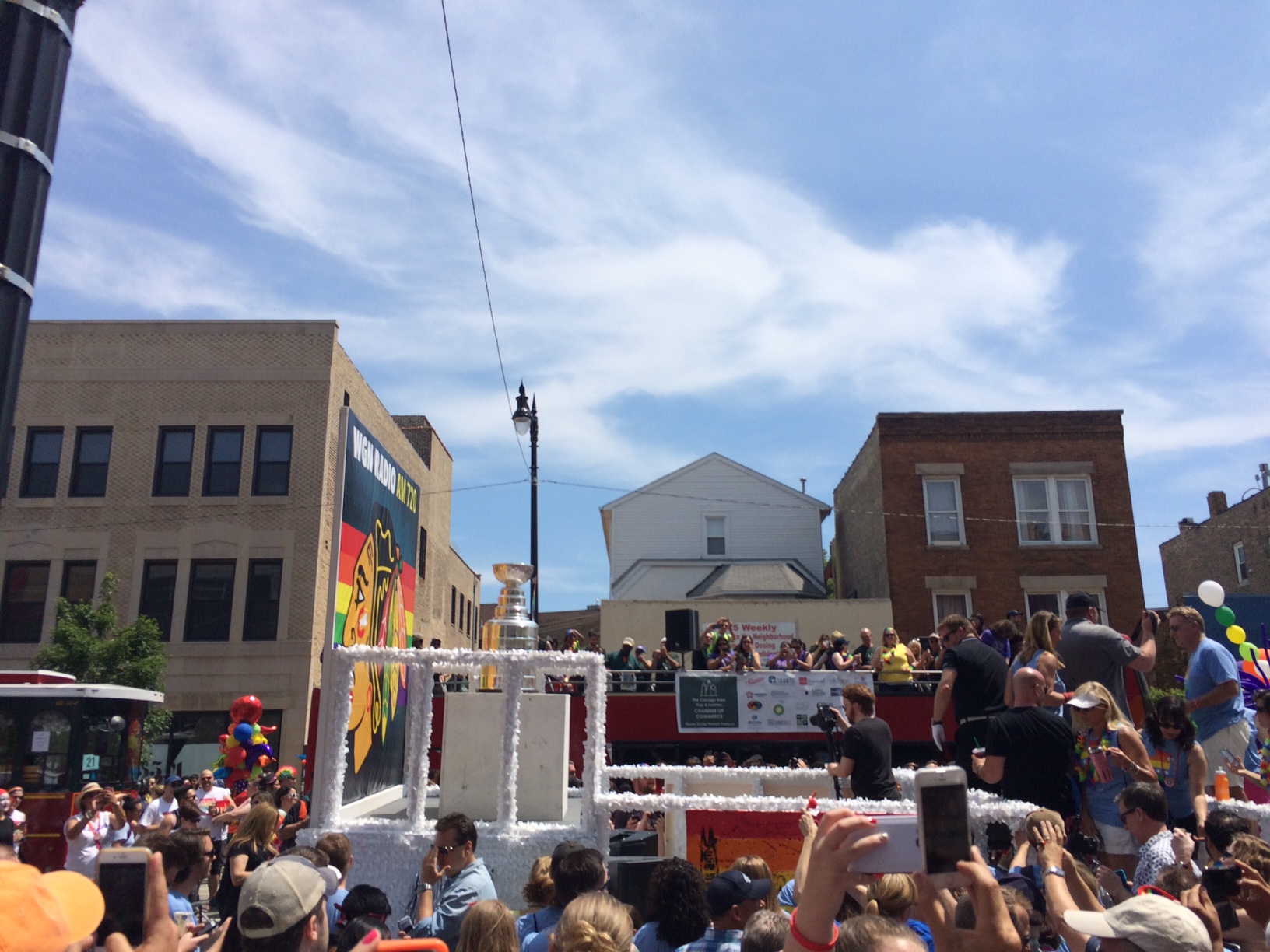 Patrick Kane showed up with the Cup at the Jimmy Buffett concert in Tinley Park, complete with parrot hat and tropical-print shirt.

The Stanley Cup was on display in Sunrise, Fla., for the NHL Draft Friday and Saturday. Hockey fans were able to snap shots with the trophy while waiting to see who the Blackhawks would select in the draft.

#stanleycup nice and shiny ready for display at the #NHLDraft in Sunrise. @NHL @HockeyHallFame (Hhofarchives) pic.twitter.com/NYRivOZXH7

Rumor had it that Coach Q took the Cup to the Fountainebleau in nearby Miami, too, but we could not independently confirm it.

The Stanley Cup is leaving for Las Vegas. But it won't stay in Las Vegas. The Cup will be on display ahead at the MGM Grand hotel ahead of the NHL Awards.

Sign up for our free daily newsletter with news from your neighborhood.

7:30 PM UPDATE: The Cup paid a special visit to the corner of West Fletcher Avenue and Campbell Street to meet with the "Stanley Pups," six pit bull-type dogs rescued from high-kill shelters in Chicago by the Bickell Foundation, founded by Blackhawks left wing Bryan Bickell. The foundation works to find homes for pit bulls and related breeds, who tend to have lower adoption rates. 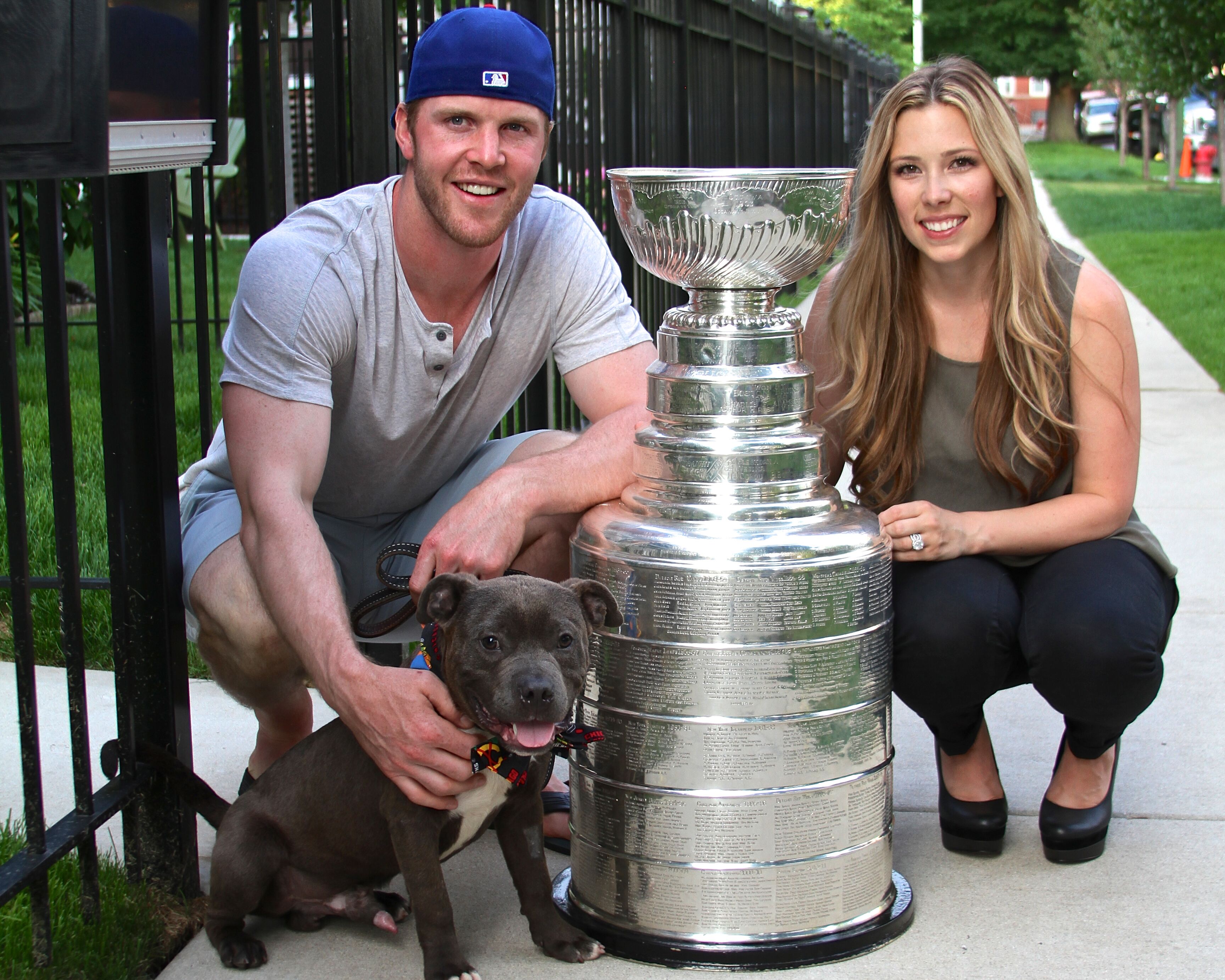 Duncan Keith walked past going into the Flagship Tavern! He is there now! @NHLBlackhawks #CupTracker pic.twitter.com/CMqtwxNbVo

12:30 AM UPDATE: After hitting two outdoor concerts, the Stanley Cup headed to the Godfrey Hotel in River North.

9:50 PM UPDATE: It's a night of music for Stanley. Country star Dierks Bentley hoisted the Cup above his head during the first night of the Lakeshake festival on Northerly Island.

5:09 PM UPDATE: Tracking the Cup? Look up — Marian Hossa took it on a helicopter tour of the city.

2:23 PM UPDATE: Looks like Stanley has expensive taste. The Cup has been spotted at the Gold Coast Bentley dealership, 834 N. Rush St.

Look who I ran into in the lobby. Oh heyyyy.. #stanleycup #cuptracker

Following the Stanley Cup today. This was just outside of trump tower chicago @thecuptracker #stanleycup

10:55 AM UPDATE: Center Brad Richards brought the cup to 670 The Score's studios in the Loop.

Blackhawks' Brad Richards is in studio with the Cup: http://t.co/6pC174BHJJ pic.twitter.com/2J6JvhOkNu

10:00 AM UPDATE: The Cup visited the studios of CSN Chicago. 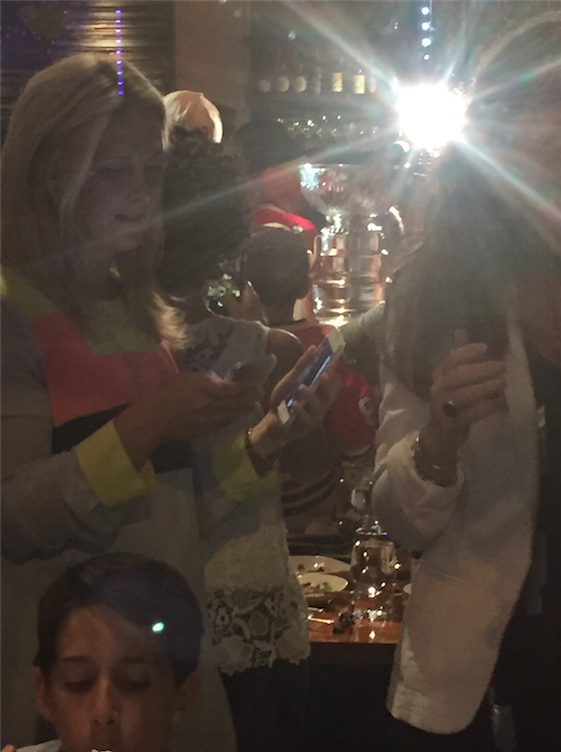 Stanley spotted at another Near West Side locale, TWO Restaurant. [Ben Guerra] 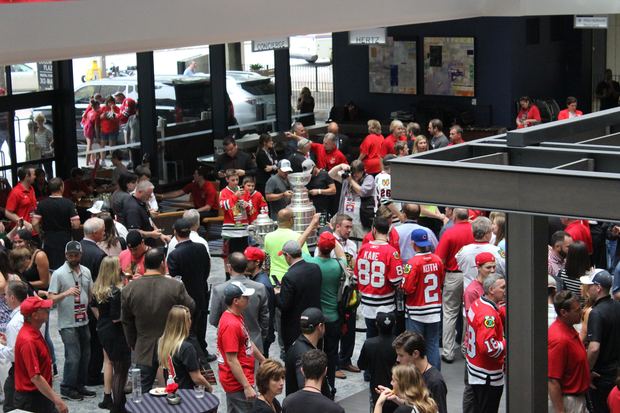 11:15 AM UPDATE: The team and the trophy enter Soldier Field for the Championship rally.

10:10 AM UPDATE: The Cup and Blackhawks begin their third Championship parade in six years.

12:39 AM UPDATE: After visiting the South Loop, the Cup headed to River North's Paris Club and Studio Paris. The crowd went crazy.

8:10 PM UPDATE: Fans and police await the Cup's appearance at the Scout.

9:35 AM UPDATE: The Stanley Cup returned to the "scene of the crime": the United Center.

8:30 AM UPDATE: The Stanley Cup was spotted at WGN Radio in the Tribune Tower.

12:15 AM UPDATE: The Stanley Cup was packed up and driven away from Rockit.

Lord Stanley's Cup disappeared from public view for a few hours (presumably to allow the Hawks players to rest), but as the sun went down Wednesday night it surfaced at The Scout, 1301 S. Wabash Ave.

That was after hours of Twitter silence, when the Hawks themselves tweeted that the Cup was at the "scene of the crime":

Look who's back to the scene of the crime. pic.twitter.com/IArH82tEpJ

It was spotted at the Tribune Tower on Michigan Avenue, which also houses WGN Radio, around 8:30 a.m. Wednesday:

The 122-year-old Stanley Cup hardly acted its age Tuesday. Instead, it was like a thirsty twentysomething storming into any bar it pleased.

From an overnight party in the West Loop to a lunch date in River North to an all-night bender that included bars in Wrigleyville and River North, the Cup got reacquainted with Hawks fans.

And they happily tracked, cheered, photographed and even kissed the trophy if they could get close enough.

It was a three-peat performance of the Blackhawks' now-expected post title victory lap around their favorite watering holes. The team did similar tours after Stanley Cup titles in 2010 and 2013.

Highlights of the Stanley Cup win, courtesy of WGN 720AM:

This one featured a lot of the same traits: Champagne spraying down on fans outside Rockit Bar & Grill on Hubbard, team photos on the mound at Wrigley Field, Patrick Kane carrying around a beer, party buses full of Hawks ... and tons of adoring fans.

This year, Patrick Sharp hosted an early evening rooftop party with the Cup at his Lakeview house. News helicopters and fans on the sidewalk captured shots of the party.

Then, the team and the Cup loaded into two party buses to for the short ride to Wrigley. One of the two party buses in the motorcade got into a slight fender bender with a car, and there was a brief stoppage for police.

Then it was off to Wrigley Field for some serious adoration by fans.

From there, the party really picked up, with the team getting back on the party buses and heading to Rockit Bar in Lakeview. Then it was back on the bus for a trip to Sluggers in Wrigleyville, where Patrick Kane got a huge cheer as he walked in with a beer.

Was there a set lineup of bars to hit? Maybe, but the Cup's bus driver didn't know.

"It will be pretty random," said the driver. "They tell me, and I go."

Apparently they told the driver to head from Wrigleyville to the Near North Side, where the players got out at Tavern On Rush and took selfies with waiting fans.

Then it was off to another Rockit, this one at 22 W. Hubbard in River North.

Players, cup loading back onto bus. Was in there after all. pic.twitter.com/tSoBg259tj

Just caught the bus driver. Not even he knows where he's going next. "It'll be pretty random. They tell me, and I go." #CupTracker

Earlier Tuesday, after the Cup spent the night with the partying Hawks at the United Center, players took it to The Mid in the West Loop. It returned to the United Center for a stint before heading to Phil Stefani's 437 Rush in River North. 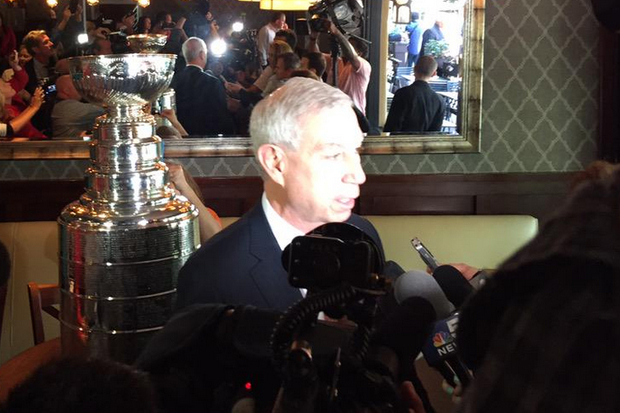 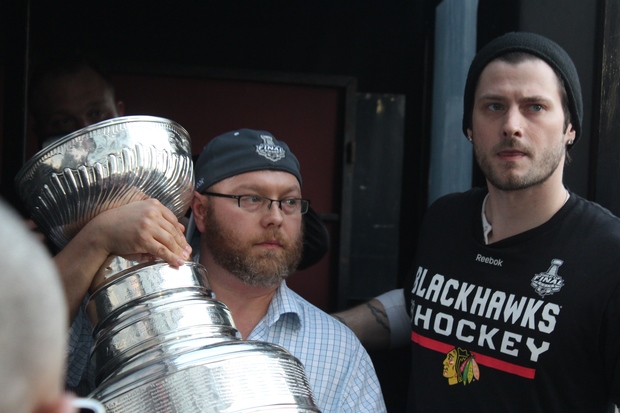 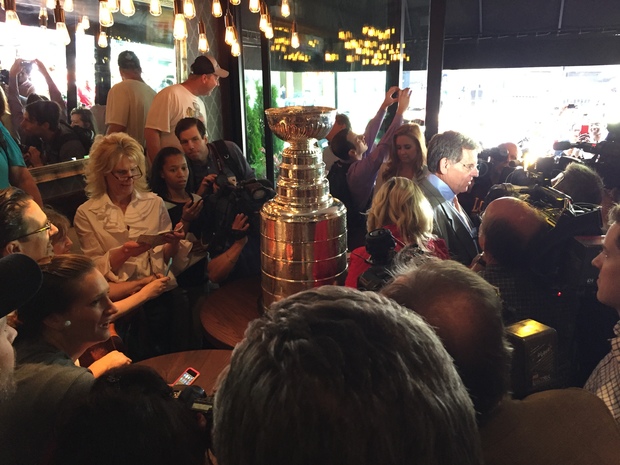 The Cup made quite a centerpiece at 437 Rush.

The Blackhawks beat the Tampa Bay Lightning 2-0 in Game 6 of the Stanley Cup Final to take the Cup Monday night.

Follow our live blog of the Stanley Cup's travels here: