DOWNTOWN — Hundreds of "zombies" are set to march Downtown this weekend, all while a nationally televised skate competition is rolling nearby.

The 8th Annual Chicago Zombie March will step off at 3:30 p.m. Saturday. The parade, which could draw more than 800 made-up members of the living dead, will start at The Bean and proceed to Tribune Tower, Daley Plaza and possibly back to the Buckingham Fountain, according to its Facebook group page.

The zombie parade will coincide with the Mountain Dew Skate Tour taking place that day in Grant Park. The skate competition will be broadcast on NBC, perhaps offering a national audience some horrific fun along with action sports. And the Chicago Ale Fest, a craft beer festival, will also be pouring fancy brews Saturday at Buckingham Fountain.

The intermingling of zombies, craft beer and skating will make quite a stew Saturday in Grant Park, but its biggest booster is elated.

"I think it's great. Three Floyd's has a very popular beer called 'Zombie Dust' so maybe they'll all come together," said Bob O'Neill, president of the Grant Park Conservancy. "It's really cool how all these things come together, and that would only happen in a major city and a front-yard park like this."

It wouldn't be the first time "zombies" have crashed a party, said Colleen Jones, the march's co-founder. The march always occurs in June, during peak photo season for weddings and quinceañeras, Jones said. But most of the people approached by zombies aren't frightened.

"They're really cool with it," said Jones, 28, a freelance makeup artist. "We even have [zombies] come out with their children." 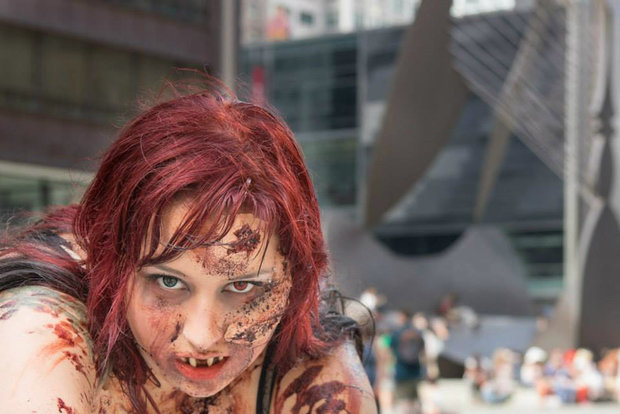 Zombies have gone mainstream in recent years, but the march was organized years before "The Walking Dead" debuted on AMC. Though this year's turnout will likely pale in comparison to the year the march brought out 3,000 "zombies," Jones believes the monsters' appeal is enduring.

"The appeal is when you die you become a zombie. There are so many ways to die and people find it interesting," Jones said. "Zombies are fun to make. They’re fun to walk and shamble and moan and groan."