Bloomingdale Trail Map and The 606: Where to Eat, Drink and More (UPDATED)

THE 606 — Use this map to help you plan your visit to The 606, Chicago's new 2.7-mile-long park and trail system, which runs through four Chicago neighborhoods and opened on June 6, 2015.

It covers entry and exit points to the Bloomingdale Trail, the "centerpiece" of a larger park system called The 606 (named for the first three numbers of the zip code all Chicagoans share), as well as information about Divvy bike share stations, CTA stations and where you can't park.

There are also dozens of food and drink options nearby that we'll point you to as well. 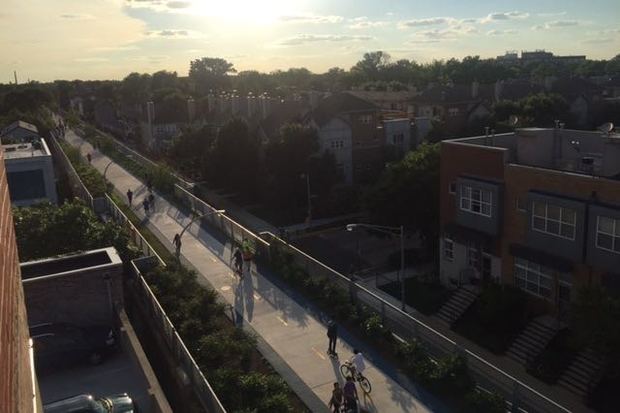 Photo of Bloomingdale Trail near Rockwell Avenue by Ben Pavlovic

For more on the trail, you peruse our archives, visit the project's newly-updated website, the606.org, or just check out this handy Q & A, which will answer all your burning questions about the most anticipated park in recent memory.

What are the hours?

Like all Chicago Park District parks, hours of operation (outside of opening day) are 6 a.m. to 11 p.m. daily. Entry to the park is free.

Is the trail wheelchair accessible?

Yes. There are ramps at all four ground-level parks, which are fully ADA compliant. Most of the 12 access points offer ramps, too. Also, motorized wheelchairs are permitted on the trail, according to a Chicago Department of Transportation spokesman.

Yes, well-behaved ones on leashes only.  There is one dog park currently open along the trail: Churchill Park, 1825 N. Damen Ave. A second Dog Friendly Area is scheduled to be re-added to Walsh Park, 1722 N. Ashland Ave., at a later time.

When did the project start?

Plans to transform the defunct railroad line into a trail began in the late 90s, and there have been dozens of community meetings on various plans since then. In 2013, final plans were revealed and Mayor Rahm Emanuel oversaw the groundbreaking in August of 2013 in "Park 567" at 1805 N. Milwaukee Ave.

Whose idea was this?

The city began to investigate using the Bloomingdale Railroad line as a bike path in 1997, but the freight line remained in operation until 2001. The Logan Square Open Space Plan, completed in 2004, reintroduced the idea and included a plan to extend the trail over the Chicago River.

By 2003, neighbors and fans started Friends of the Bloomingdale Trail, a nonprofit group and advocacy arm that has helped to raise $20 million so far.

How much does it cost?

The price tag to build The 606 is currently estimated to be $95 million.

Who paid for it?

The majority of the $95 million needed to build the trail came in the form of $50 million worth of federal Congestion Mitigation and Air Quality grants, which are earmarked for commuting projects. Another $20 million was raised privately and the city/local government kicked in $5 million. There is still another $20 million left to raise. 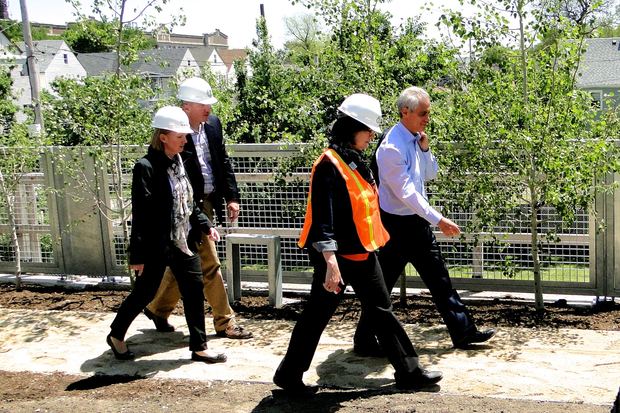 Mayor Emanuel checking out the trail on June 2, 2015 . [DNAinfo/Alisa Hauser]

How many people are expected to use the trail?

No estimates are available but there are 80,000 residents living within a 10-minute walk of the trail and parks, one-quarter of whom are children.

How will it be policed?

Officers from the body-camera-wearing Shakespeare District Police, who've been patrolling the trail and arresting trespassers for several years, will continue to monitor the trail on foot, bikes, all-terrain vehicles and, in the event of emergency, cars. Park officials previously said ambulances will be able to get on and off the trail too.

Where are the bathrooms?

At least for now, there will be no bathrooms on the trail, or at any of the 12 access points, including the parks. On Tuesday, a Chicago Park District spokeswoman said that the matter will be explored further. So "go" before you go.

Where can I park my car?

Who will plow the snow and keep the path clean?

The Chicago Park District will be responsible for keeping the trail and parks plowed and cleaned.

Are there Divvy stations on or near the trail?

There is one bike share or Divvy station directly near the trail; it is adjacent to Julia de Burgos Park, 1805 N. Albany Ave. in Humboldt Park. The other closest Divvy stations are at Damen and Cortland in Bucktown; Marshfield and Cortland in Bucktown; across from the Bucktown-Wicker Park library at 1701 N. Milwaukee Ave. next to CorePower Yoga; and Spaulding and Armitage avenues in Humboldt Park.

Download the Divvy CycleFinder app, so you can always find the nearest station and see if any bikes are available or if there is space to dock your Divvy.

Will there be more construction?

Two other parks, at 1801 N. Kimball Ave., and one spanning nearly one city block on the site of a former glove factory along Ridgeway Avenue, will open at a later date and are under construction. Funding for those parks was delayed by statewide budget cuts.

Improvements to Walsh Park, including a wheel-friendly event plaza and new playground equipment, were put on hold due to the cuts too.

Adding bathrooms and securing permanent parking likely will be considered by Chicago Park District and the Trust for Public Land, the city's private partner tasked with managing the trail, but these items are not yet confirmed. CDOT officials also indicated that more Divvy stations are coming in the future but did not specify if any new stations would be along or on the trail.

Stay abreast of what's happening by "liking" The 606's Facebook page, following The 606 on Twitter and signing up for weekly alerts at the606.org.   Also, the Friends of Bloomingdale Trail has a great online Facebook community with over 3800 members.

Here are some photos of the trail. 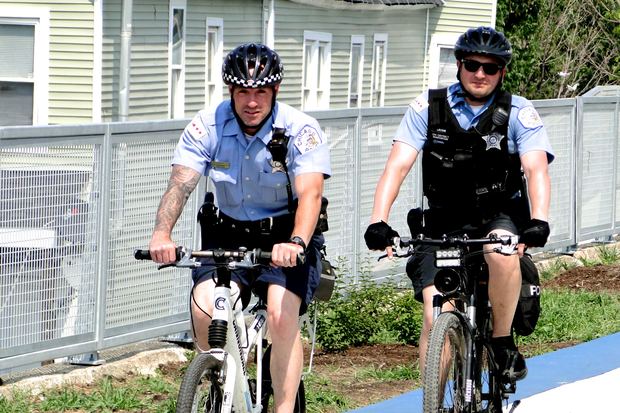 Bucktown resident on the trail, near Milwaukee Avenue, Leavitt Street 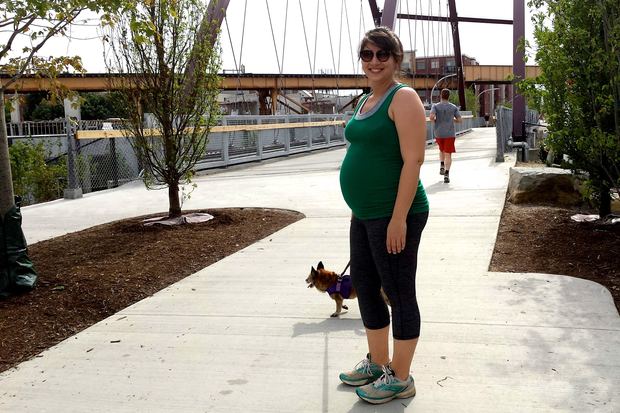 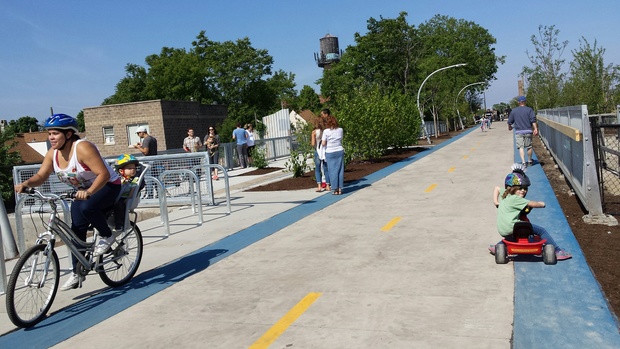 A family using the trail on opening day: 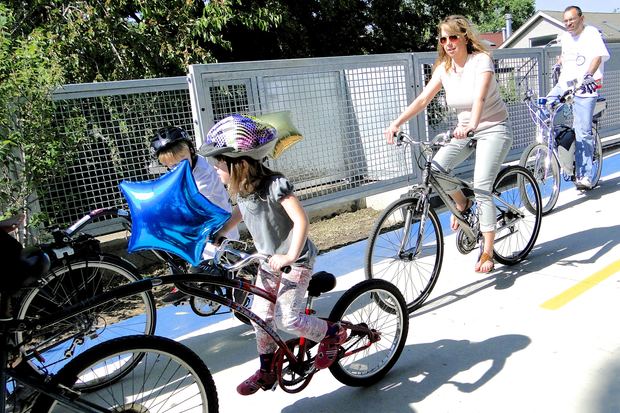 The Trail at Drake Avenue in Humboldt Park: 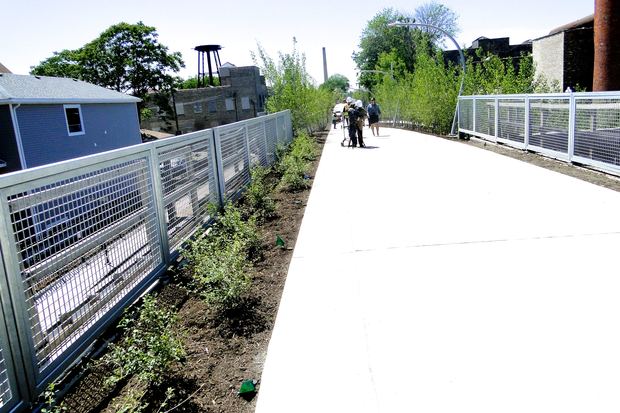 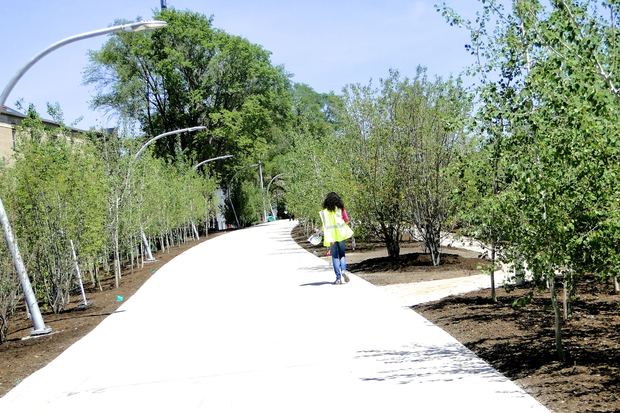 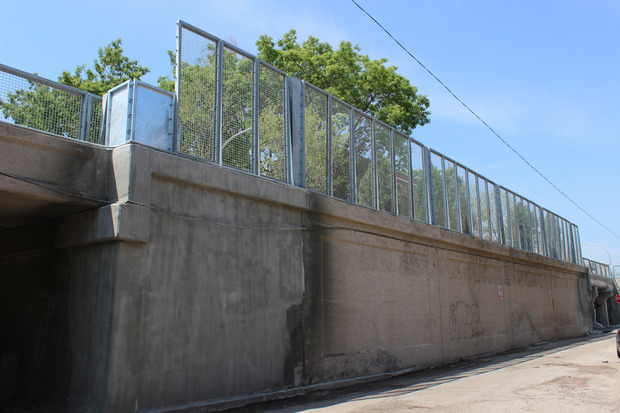 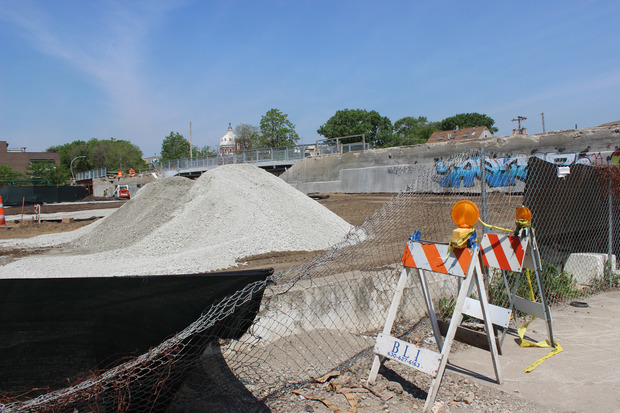 Construction photos taken May 29, 2015, nine days before the trail opened, by Tanveer Ali