DOWNTOWN — Skyler Nash has been sleeping with a pair of basketballs every night since May 7.

The likely Division I-bound player — a 17-year-old transferring from Whitney Young to suburban Riverside Brookfield high school this summer — learned from doctors he had a 1-inch carcinoid tumor in his rectum that night.

The Chinatown resident had the tumor removed on May 22 at St. Joseph Hospital and discovered last week the cancer is in remission. Since then, he's been on bed rest, patiently waiting to return to practice and games with his AAU Illinois Wolves travel team and his future high school squad.

His dreams are filled with hoops thoughts, while the 6-foot-5 guard/forward cradles a pair of dark brown Under Armour basketballs.

"There have been some dark times throughout this, thinking about all I’ve gone through in terms of losing basketball for a long period of time," Skyler said during an interview Downtown Wednesday, one of the first times he's been away from his house or the hospital since early May. "It's hard to not feel sorry for yourself, but then I can also look back and see how lucky I've been, to find the tumor so early." 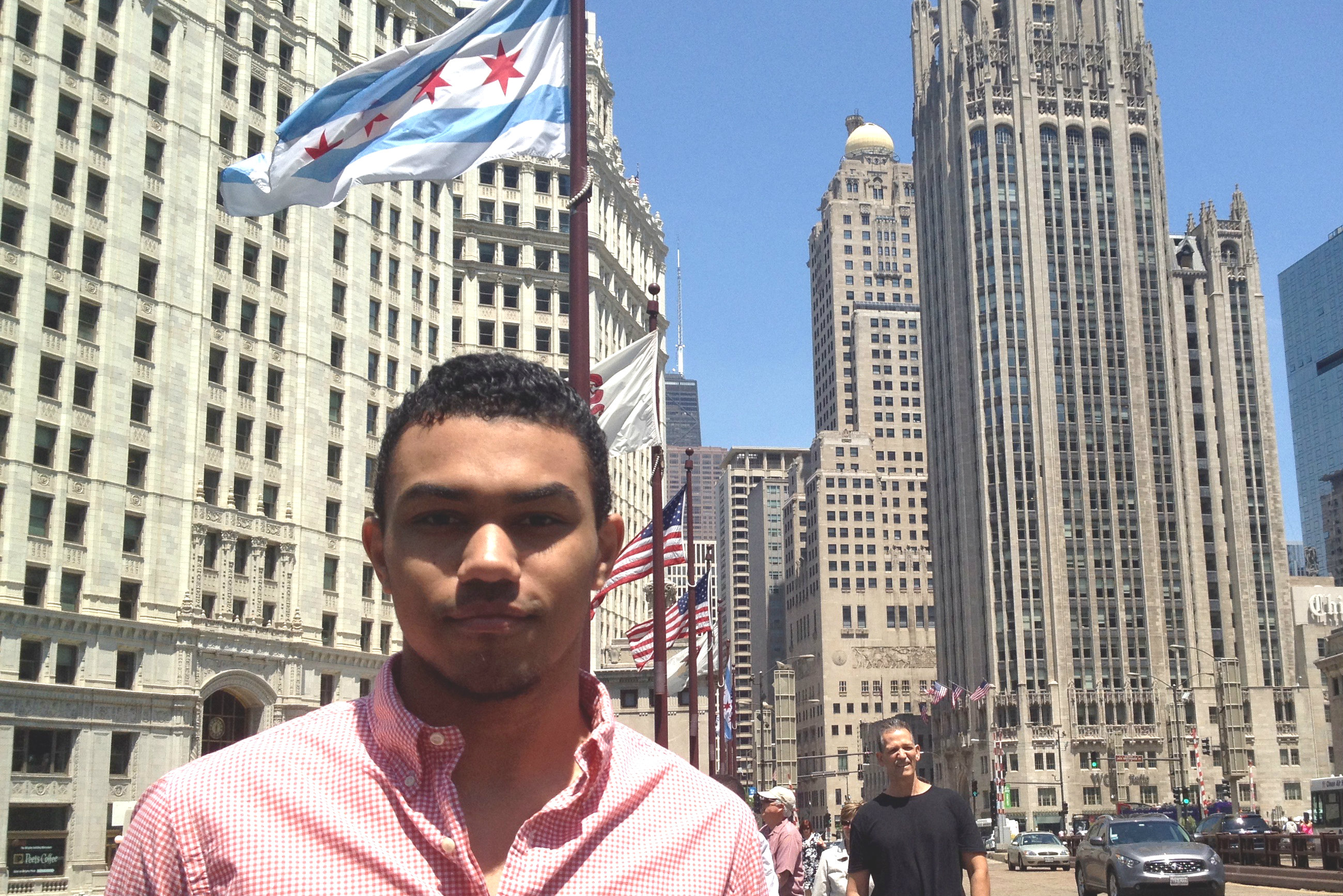 Skyler Nash was Downtown Wednesday, one of the first times he's been out of the house or hospital since late April. [DNAinfo/Justin Breen]

Doctors discovered the tumor almost by accident. On April 29, he visited the emergency room with excruciating pain he and his mother, Lori Holton, thought was appendicitis. After a colonoscopy, doctors on May 1 discovered an infection called clostridium difficile, which left Skyler "weak and dehydrated."

"Because of the colonoscopy his rare carcinoid cancer tumor was discovered," said Holton, known as "Miss Lori" for her work as a blogger for Babble.com. "All of those dominoes needed to tumble to save Skyler's life. They all happened for that reason."

Skyler said he's been inspired by support from his friends, his girlfriend Cali Leeds, basketball teammates at Whitney Young, and the Wolves, and especially his younger sister, Jaedyn. For the last seven years, the 12-year-old has lived with small duct chronic pancreatitis, which prevents her from absorbing most foods. Skyler's home pantry is filled with crackers and cans of chicken rice soup because those are some of the few things Jaedyn can eat regularly. Her illness became so extreme that she was forced to leave Village Leadership Academy halfway through this past school year.

"I'm so impressed with her," Skyler said. "A lot of kids wouldn't know what to do with themselves, but she's always trying to learn, watching documentaries. And she's obsessed with animals and can cite all these facts about dinosaurs. My experience has given me a better understanding of what she goes through."

While Skyler was at St. Joseph after his surgery, he said he had a minimum of four to five visitors a day. That included his friend and Wolves teammate Barret Benson — one of the state's top class of 2016 recruits — and Whitney Young senior-to-be Cole Rodby.

While Rodby was in Skyler's hospital room, the pals watched a Chicago Bulls playoff game and cracked jokes like "everything was normal," Rodby said.

"He never complained once, which shows how strong he is," said Rodby, a Dolphins basketball player who lives in Lincoln Park. 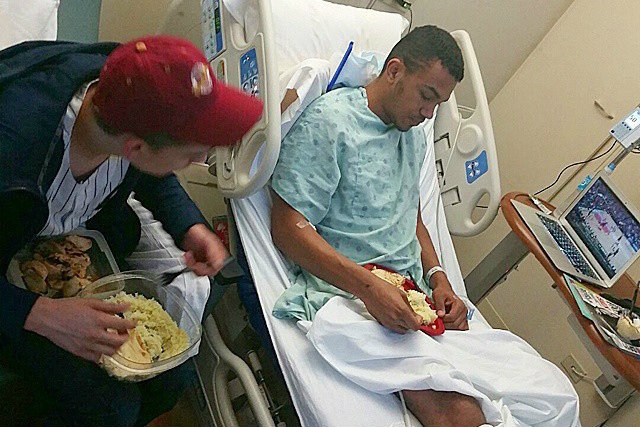 Skyler Nash gets a visit from his friend Cole Rodby in the hospital. [Skyler Nash]

After Skyler shared his diagnosis on Twitter in early May, he said he received countless tweets and text messages, including this tweet from Whitney Young grad and likely No. 1 NBA draft pick Jahlil Okafor.

"He found out that a lot of people, players and coaches he didn't even know from all over the country, along with teammates and opponents from Chicago, took the time to reach out," said Skyler's father, Larry, a Bronzeville resident. "I think for him, and us as parents, it was great to see how many people were pulling and praying for him, the respect he has in the basketball community, and the great circle of friends he has from all walks of life."

Although Skyler said the cancer is in remission, he still has to have a colonoscopy every three months. "A lot of anesthesia to come. My story isn't over yet," he said.

He's been off the high school basketball radar for most of the last two seasons with various injuries, including plantar fasciitis, but because of his solid AAU play, Skyler had received an offer from Kansas State University and interest from Wisconsin, Indiana, Iowa State and Yale. The cancer experience has taught him not to look too far ahead, but he's fully expecting to play Division I ball, either after next school year or after a season of prep school.

His AAU coach, Mike Mullins, said Skyler's journey stresses the importance of focusing on "faith, family and academics" before athletics.

"It's why we stress education first," Mullins said. "Everybody has their different path to [college basketball], and it's never a straight line. Skyler's hasn't been a straight line for a while, and his best days are ahead of him, but the first thing he has to do is have sustained health."

Skyler exercised for the first time in more than a month Tuesday — a 30-minute stint on a Bowflex TreadClimber, which felt "great but not awesome," he said. Soon, he hopes to begin kettlebell and other workout regimens again with his personal trainer, Sean Armstead — co-owner of Phenomenal Fitness in the South Loop.

Armstead, who's known Skyler since he was a baby and thinks of him as a "blood nephew," said he has no doubt Nash will be back in playing shape soon.

He'll "reach new highs in basketball and warrior development," Armstead said. "'Sky is bigger and a more special person from the inside than you can ever know."

Skyler, his mother, Jaedyn and other sister Kaiann are moving to the suburbs later this summer for "improved health and a fresh start," Holton said.

Skyler hopes to join the Wolves for a trio of July tournaments, and Skyler is excited to compete with his new high school team in the fall.

Skyler has been playing basketball since he was a toddler, holding little Nerf balls in his crib. He can't wait to return to the court.

Happy to say after a successful surgery this morning I am officially Tumor free! Thank you everyone for the support! pic.twitter.com/F86PxzNZQ4 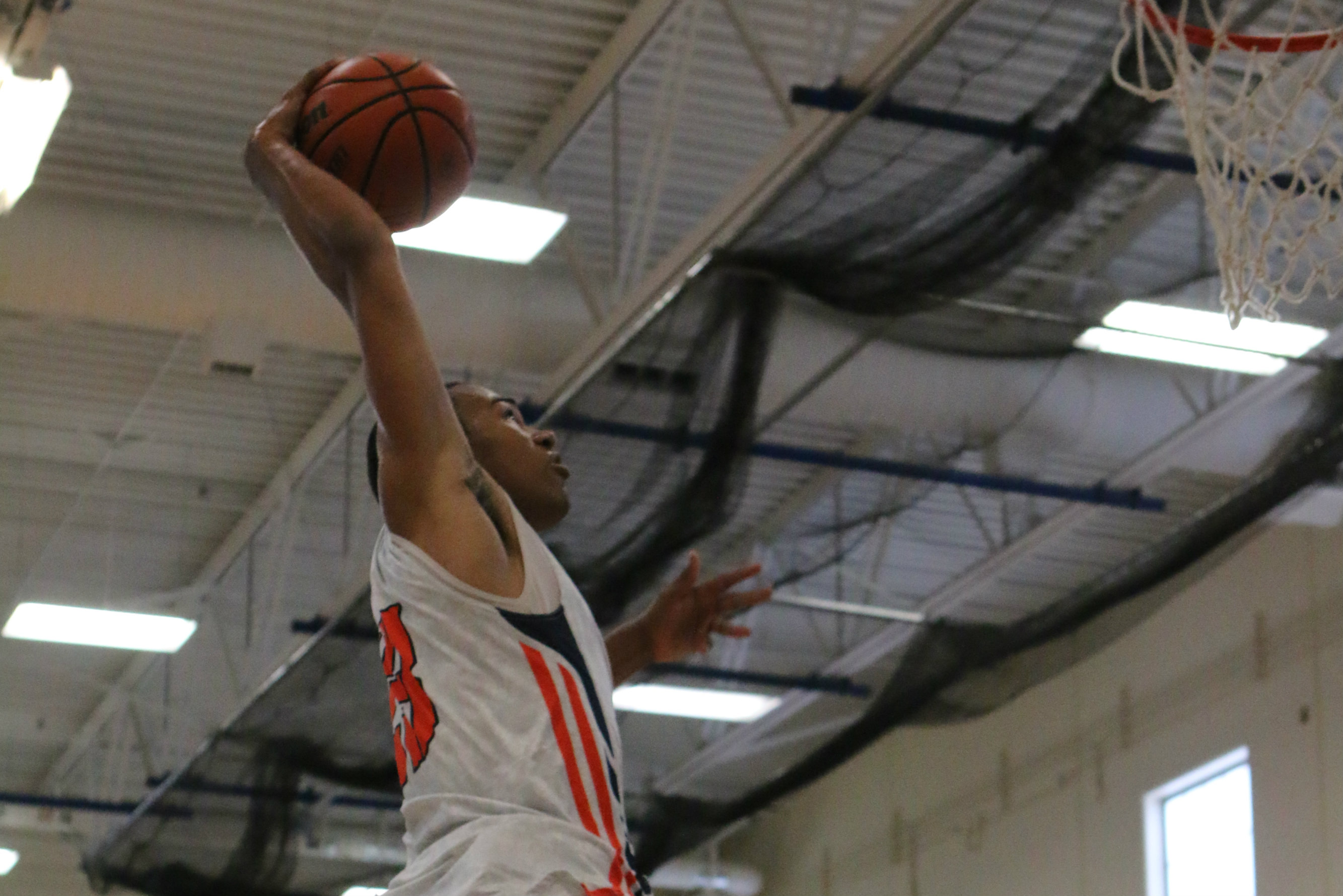 Skyler Nash hopes to be back on the court for the Illinois Wolves AAU travel team later this summer. [Bob Musak]