Playboy Art Director, Art Paul, 90, to 'Put it All Out There' in New Show

DOWNTOWN — Best known for creating the rabbit-head Playboy logo and serving as the founding art director for one of the most influential magazines of the 20th Century, Art Paul has devoted his life's second chapter to producing an immense body of drawings and paintings.

During a tour of his home studio on Sunday, Paul explained that a few "little strokes" means he "can't always find the words," while macular degeneration has caused his eyesight to slowly fade.

But on canvas, crumpled paper and aluminum foil, the prolific 90-year-old artist uses lines and sketches as his language. Colored pencils, graphite and acrylic paints are his preferred mediums.

"My [latest] pictures are about aging and losing sight, upbeat stuff," Paul said. "A line I used to make straight; it is crooked — but you use it. It's almost a surprise. You take that and go somewhere else."

Alisa Hauser says Paul's wife was instrumental in pulling off the show:

Described by Chicago Cultural Center curator Lanny Silverman as "one of Chicago's better-kept secrets," Paul, who lives in a Downtown high rise, credits his wife Suzanne Seed for encouraging him to organize his work and exhibit at shows since retiring from Playboy in 1982.

"I was seeing the work pile up. He'd rather just keep adding yet more drawings to the lively trove of the thousands he has created," said Seed, Paul's wife of 40 years.

Seed, along with Silverman and Stansilav Grezdo, authored "Hard Heads, Sweet Knees and Forked Tongues," a book that serves as a guide to Paul's new solo exhibit by the same name.

Debuting at 6 p.m. to 9 p.m. Friday at the Ukrainian Institute of Modern Art, 2230 W. Chicago Ave., about half of the show's 100 works are part of a “Head” series, a collection of inner portraits of anonymous faces.

"I'm always challenged by the head and working through the mind, making a statement," Paul said.

When asked what he is most looking forward to in regards to the new show, Paul quipped, "Staying alive."

He elaborated, "If you are an artist, one of the things that makes it fun for you is to put it all out there."

In addition to heads, there are paintings, line drawings and "word drawings," including one of his daughter's recent favorites: a sketch of a hunched over elderly man next to a cursive phrase, "Go figure the weight of the world."

Paul's lifetime dedication to art is also serving as the focus of, "The Man Behind the Bunny: The Art of Playboy," by documentary producer Jamie Caeser and director Jennifer Hou Kwong, set to be completed next year.

In 1953, Paul was a freelance artist doing illustrations for Marshall Field's, among other accounts, when Hugh Hefner walked in to pitch an idea for a magazine that was initially going to be called "Stag Party."

"He knew as soon as he walked in that it had to be me," Paul said of Hefner, who brought Paul on as Playboy's first employee.

"Illustrations are very important but were considered to be a step down from art. If you were an illustrator you had to do everything possible to make a living," Paul said.

Paul graduated from Sullivan High School in Rogers Park and though he won an art scholarship to the School of the Art Institute of Chicago (SAIC), he interrupted his education and volunteered to join the Air Force in World War II. Paul later finished his degree on the GI Bill at the Institute of Design, known as "Chicago Bauhaus."

While leading Playboy's design department, Paul mentored dozens of younger artists including Brad Holland, who was barely out of high school with very little published work under his belt when he met Paul, who Holland said "treated me as graciously as if I had been a longtime contributor."

Paul's 29 years at Playboy brought graphic design to a mass audience and "proved that good illustration is just a form of popular art," Holland said.

Reflecting on the last 33 years of Paul's work, Holland said, "Art's art is the work of man whose modesty is rooted in a profoundly secure ego. With nothing to prove, he reveals himself by boiling things down to their essence. It isn't technique; it's a way of seeing and thinking." 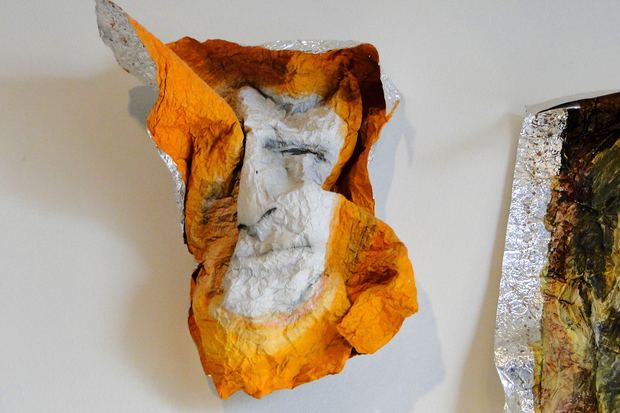