Austin Kids With 'Promise, But Not Money' Get Scholarship Help From Church

By Linze Rice |&nbspMay 26, 2015 5:30am
@linzerice
Twitter Facebook Email More
Interim Pastor Jennifer Nordstrom gives a pep talk to a group of scholarship recipients who will receive their awards on May 31 at Third Unitarian Church in Austin.
View Full Caption
DNAinfo/Linze Rice

CHICAGO — Ronald Merritt was having a bad day when he went to check his mail one afternoon.

Inside the mailbox was a letter to him from the Third Unitarian Church in Austin. Once he opened it, the day dramatically turned around for the 17-year-old senior at Austin Career Academy.

The letter told him he'd been selected for a $1,000 scholarship through a 41-year-old church program.

For Ronald, it was just another piece of the dream that he and his mother shared for him: pursuing a career in performing arts by going to college at Northern Illinois University.

Ronald wasn't the only one to receive one of those letters, nor was his reaction of relief and gratitude unique.

Melany Castillo, an 18-year-old senior at Benito Juarez Community Academy, said it was a dreary, rainy Saturday when she, too, went to check her mail.

Waiting inside was a wet envelope with her name stamped on it.

In the days leading up to her letter's arrival, Castillo said her friend and fellow scholarship recipient, Jairo Javier, 17, also a Juarez student, had been calling her asking, "Did it come yet?"

"I called him right away," Castillo said.

These teens are among many to receive good news by mail from Third Unitarian Church, which is holding an awards ceremony Sunday at the church at 301 N. Mayfield Ave. in Austin.

"She is sort of the 'tour de force,' the charismatic personality behind the committee," Jennifer Nordstrom, interim pastor at Third Unitarian, said of Wilson, a longtime congregation member and 39-year chairwoman of the scholarship committee.

"I don't know how I got on the committee, I really don't," Wilson said of her  tenure. "And I've been out here battlin' ever since."

And this year's scholarship fund — bursting at $30,000 — proves Wilson's not exaggerating when it comes to fundraising.

That means 30 Austin area students, many of them the first in their families to get the aid they need to take the first step in higher education, will receive $1,000 scholarships.

"Helping people is my thing, because somebody helped me to get where I'm at," Wilson explained.

'When I started working ... it made a difference'

Wilson, the fourth sibling in a family of nine, said she faced hard times growing up in a sometimes abusive and hostile environment. Had it not been for the shelter, support and guidance from her beloved "Auntie," she said she wasn't sure she would be the empowered and tenacious woman she is today.

"You know, one of those children is always known as the 'black sheep' or the 'white sheep' or the 'green sheep?'" she said. "Well, I guess I just picked up [my Auntie's] vibes. And when I started working at the public schools, it made a difference."

Now, at 88, she's spent the better part of her life trying to return the favor to the children of Chicago through the scholarship committee.

The academic year before students are awarded scholarships, the church's program committee sends out community and congregation members like Wilson to begin the selection and fundraising process.

Scholarship representatives head out to each of the neighborhood's public high schools, working with school administrators to identify academically fit students who lack resources. 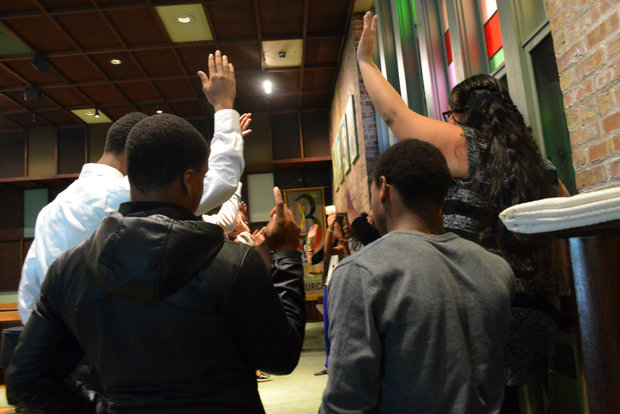 "They work with the schools to identify students who have promise, who may not have a lot of money to go to college," Nordstrom said, placing on emphasis on the desire to help first-generation college students in the neighborhood.

Simultaneously, committee members reach out to new and old business owners, personal contacts and former scholarship recipients, in addition to utilizing interfaith networks between other Unitarian and Universalist churches nearby.

Nordstrom said in most cases donors were asked to only sponsor one child, although some opted to support several at a time.

Each of those $1,000 scholarships is divided into two $500 installments: the first dispersed if the student's high school grades are satisfactory and she's accepted into a college, the second contingent upon successfully completing the first semester in college.

Back in the program's early years in the 1970s, Wilson said only five to 10 scholarships were awarded annually, with the number increasing into the teens and 20s as support swelled.

"We've been doing it in the Austin community for 41 years, and I think people see there's a need to help young people get off the streets and going into college," Wilson said.

That message of helping the neighborhood's youths has not been lost on those who've received the award in the past either, Wilson said.

Many scholarship recipients return to the church and neighborhood to thank committee members like Wilson for giving them the opportunity they needed to blaze the path of success.

"One young man, about a year ago, he surprised me," Wilson said. "He came out to the church, and he said [to recipients], 'Ms. Wilson's always out here working for the kids, and she don't take no answers for 'no.' She says you gotta go to school, you gotta go to college, you gotta graduate college."

She said she was moved by his tribute to her, and if the work she was doing could affect the lives of other young people, then she will have left behind the exact legacy she's hoped for.

"My legacy would be that I have left a Ph.D. in 'streetology' for young people," Wilson said, explaining that over the years she's learned positive, effective ways of reaching out and communicating with others. "I just want other people to help the young peoples today move on, because they are our future, without them we're nothing." 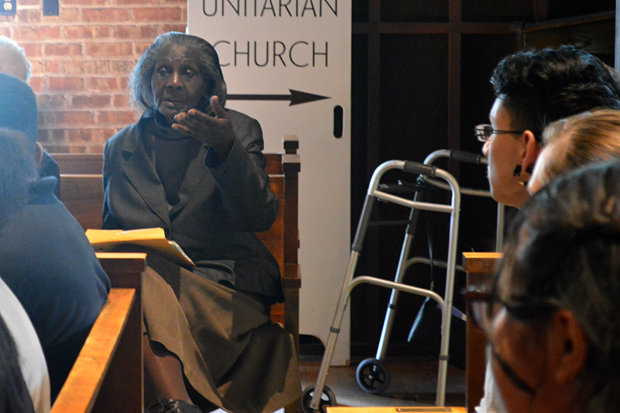 Megan Cannady, a 17-year-old senior at John Marshall Metro High School, said after she earned a degree in English and law from Chicago State University she planned to bring her education back to the Austin community, where she could help others achieve their goals.

"I want to work with children, with the youth in the community," she said. "To come back and help my community, that is my plan."

Megan's mother, Ora, said she's proud of the young woman her daughter is becoming, and is grateful for the church's scholarship program because "every little bit helps."

As the church's program continues to serve the Austin community's children, it would seem as if Wilson's hard-fought legacy will be just that: helping Chicago's youths achieve their academic potential.

But she said she can't do it alone.

The church's program relies heavily on donations, and Wilson had one final thought to anyone who may be considering what to do with their extra cash.

"If anybody, anybody, have any money that they don't know what to do with — look under the rug, under the bed, under the dresser — they can always send it to [the church] for the scholarship fund. That's important to me."