Latest Phase of Chicago Riverwalk to Open This Weekend

DOWNTOWN — The latest phase of the Chicago Riverwalk is set to be unveiled to the public on Saturday.

Even as construction on the final touches continued Friday, Mayor Rahm Emanuel toured the area of the second phase of the Chicago Riverwalk, a stretch that extends from LaSalle Street to Lake Shore Drive.

The mayor granted that it would be a tourist draw, but quickly added, "First of all, I think it's gonna be a draw for the people who live in the City of Chicago."

Emanuel pointed out that the river had been sealed off and all but unapproachable for years, but said, "Now we're gonna open up a part of the city that has been closed for decades."

Mayor Rahm Emanuel chats with construction workers taking a break from putting the finishing touches on the Marina part of the Riverwalk between State and Dearborn.
View Full Caption
DNAinfo/Ted Cox

The mayor first announced plans to develop the Riverwalk almost three years ago. It benefited from a $100 million U.S. Department of Transportation loan secured just over two years ago.

Sections opening Saturday are the Marina, between State and Dearborn streets, and the Cove, from Dearborn to Clark Street. The River Theater, from Clark to LaSalle Street, is expected to open early next month.

The final phase of the project, extending on to Lake Street, begins next month and is expected to be completed in 18 months, before the end of 2016.

Transportation Commissioner Rebekah Scheinfeld called it "a tremendous additional recreational opportunity for all in Chicago," adding that it would "serve generations to come."

DNAinfo Chicago first reported Thursday that the pop-up tiki bar with accompanying party boats will open Saturday on the Chicago Riverwalk as part of the city's $100 million plan to revive the stretch of riverfront property.

Island Party Hut, a spinoff of the Island Party Boats that set sail from Monroe Harbor, will begin serving tropical rum-based cocktails and sandwiches Saturday on the riverfront just east of Columbus Drive. 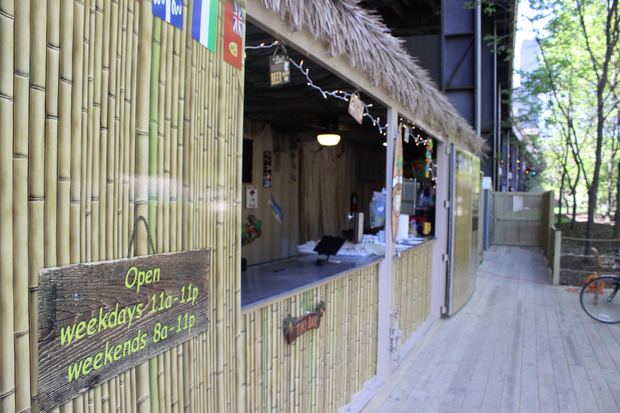 The tiki bar is the first of many vendors set to open on the Riverwalk as the city pushes to develop the Chicago River into a tourist destination that rivals the beaches of Lake Michigan.

The mayor has made it a priority to develop the Chicago River and its North and South branches on par with the lakefront, and he emphasized that Friday, saying, "With a city that has 26 miles of lakefront, we're now gonna open up 26 miles of riverfront."

Dave Matthews says the tiki hut is all part of a bigger plan for the riverfront: