DOWNTOWN — Many of the planter boxes along some of Chicago's most prominent streets need a makeover, and a Downtown group has started finding the money to pay for it.

The Grant Park Conservancy said it has corralled a dozen Downtown landlords including Columbia College Chicago and Golub & Co. to pay for the beautification of 26 planters on Wabash Avenue from Jackson Boulevard to Roosevelt Road. The work, with a rough annual cost of $1,000 per box, will begin within a month as summer approaches, Grant Park Conservancy President Bob O'Neill said.

"The investment in parkway trees and plants and flowers more than pays for itself in economic development and tourism," O'Neill said. "When people go visit a city they notice those things right away."

Dave Matthews says initial costs may be high but would ease later:

The makeover will arrive about a year after O'Neill criticized city officials and nearby landlords for allowing planters on Wabash, Michigan Avenue, and Congress Parkway to evolve into what he called garbage-strewn "litter gardens."

Anthony Pesce, who sits on the Grant Park Advisory Council, said he recruited many Downtown property owners who have since agreed to help out. Columbia College alone is paying to replant 10 of the planters.

O'Neill hopes the future improvements on Wabash will soon persuade other nearby property owners to join the cause.

"We've taken this upon ourselves because nobody's doing anything," he said. 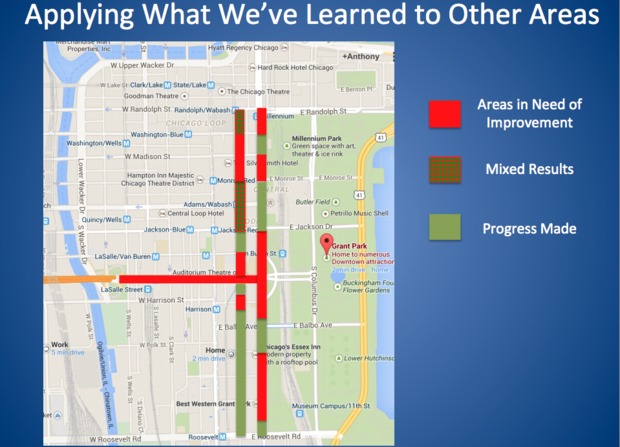 The initial cost is significant, but O'Neill urged that the improvements are more than mere "window dressing" that will hopefully generate more of a return from Downtown shoppers.

Future costs should decrease because the improved planters will be focused on year-round perennials, but annual costs could still run into six figures across the areas the Grant Park Conservancy has targeted.

The Chicago Department of Transportation is responsible for planting parkway trees and plants, but O'Neill said the onus is on adjacent property owners to maintain them. One of those landlords is the Spertus Institute, 610 S. Michigan Ave., which said it's waiting for new trees from the city to be installed next month after harsh winters knocked out its old ones.

It's Your Last Few Days To Get Amnesty for City Debt, Tickets