LAKEVIEW — The CTA has released video renderings of what its proposed Belmont bypass flyover would look like from street level and track level, videos that add potential commercial and residential developments around the high-flying "L" tracks.

Here's a track level view of the engineering animation...

Here's a street view version of the engineering animation...

Despite rejection from voters and staunch opposition from neighbors, the Brown Line bypass is the best option for the city, the CTA says.

In an environmental assessment released Tuesday, the CTA cites deteriorating 100-year-old tracks and a 40 percent increase in ridership over the last five years as key reasons the flyover is needed at the Belmont station.

"The outdated track configuration is the equivalent of a traffic signal in the middle of a busy highway. CTA needs to add more trains to alleviate overcrowding, but we can't do so until we eliminate the traffic light," said Carole Morey, CTA chief planning officer.

While neighbors insist a better solution would be to nix the flyover and just focus on improving tracks and structures, CTA spokeswoman Tammy Chase said that wouldn't be enough to accommodate as many as 185,000 new residents projected to move to the area by 2040. 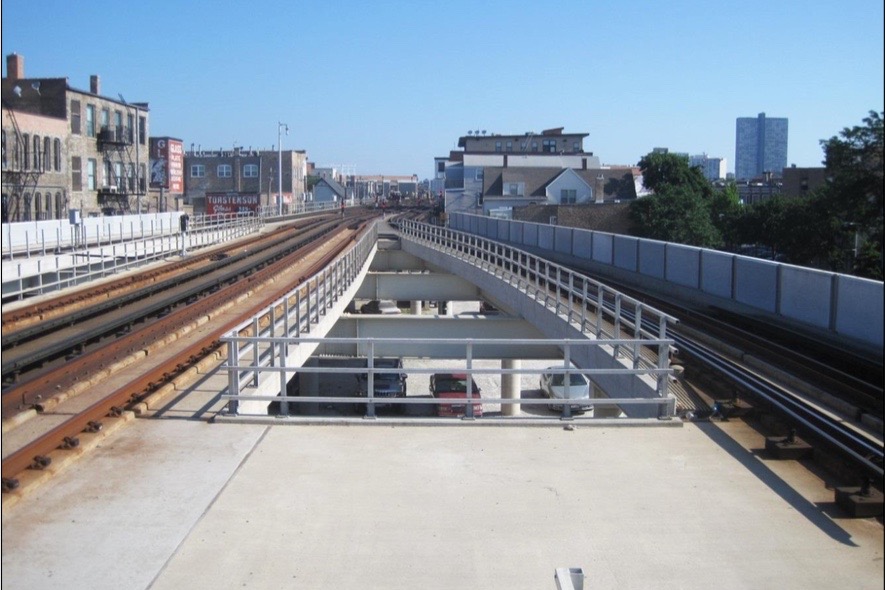 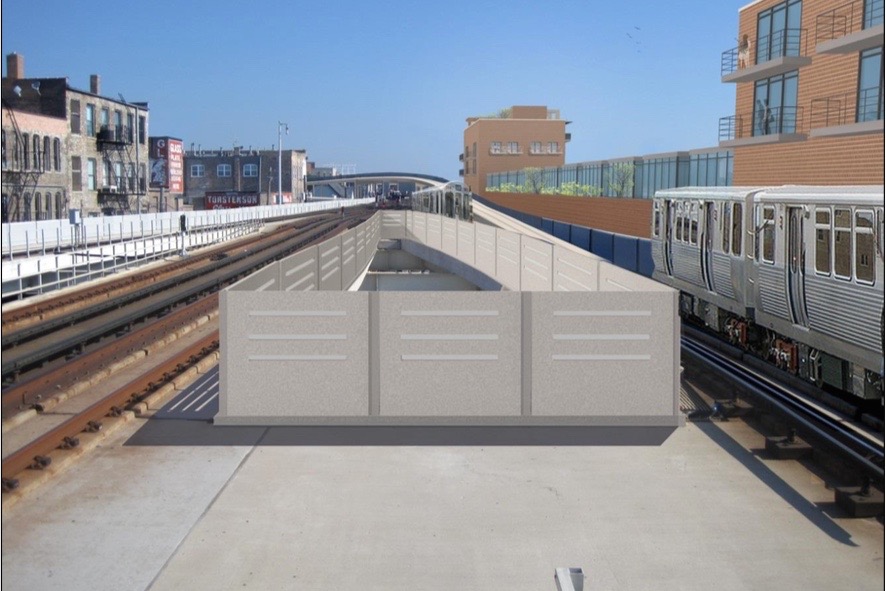 In renderings released Tuesday, the CTA depicts what the Brown Line flyover would look like at the Belmont station. [Provided/CTA]

"Rebuilding tracks and stations alone is not enough. We cannot meet future ridership demand until we unlock the bottleneck at the intersection where Red, Purple and Brown line trains intersect," Chase told DNAinfo Chicago.

By building the bypass, the CTA estimates it could add up to eight trains during rush hour on the Red Line alone and ultimately would be able to accommodate 7,200 more passengers per hour on the three lines.

Ariel Cheung says some feel the project isn't worth the costs:

The Coalition to Stop the Belmont Flyover, however, says the momentary delays aren't enough to merit a $320 million fix.

"I'm shocked they're still making such a big point out of this bottleneck when it's still just 20-30 seconds. It's a very short delay, when it happens at all," said Ellen Hughes, one of the coalition's organizer.

Hughes said other elements of the Red-Purple line modernization — particularly updating the tracks and extending stations — should be enough to get trains running faster.

"Every piece of track they make less wobbly, the trains will go faster and speed things up. But instead, they grab at this thing, this signature project, so they have a quick elevator speech about core capacity to say to the federal government," Hughes said.

Between 2012 and 2014, the CTA added 14 trains to the three lines during the morning rush and 12 during the evening rush. A maximum of 40-44 trains can travel through the Clark junction per hour, meaning the service area is now at capacity during the peak of rush hour, she said.

The bypass project would take about four years to complete, with construction starting as soon as 2017 if federal funding is acquired. Following the assessment, the CTA said it will complete preliminary engineering in the fall and apply for federal funding.

"It's not a done deal by a mile. A lot of things still have to happen. Obviously, a huge piece of this is communicating with the city and Ald. [Tom] Tunney to develop a neighborhood plan for redevelopment," Chase said. 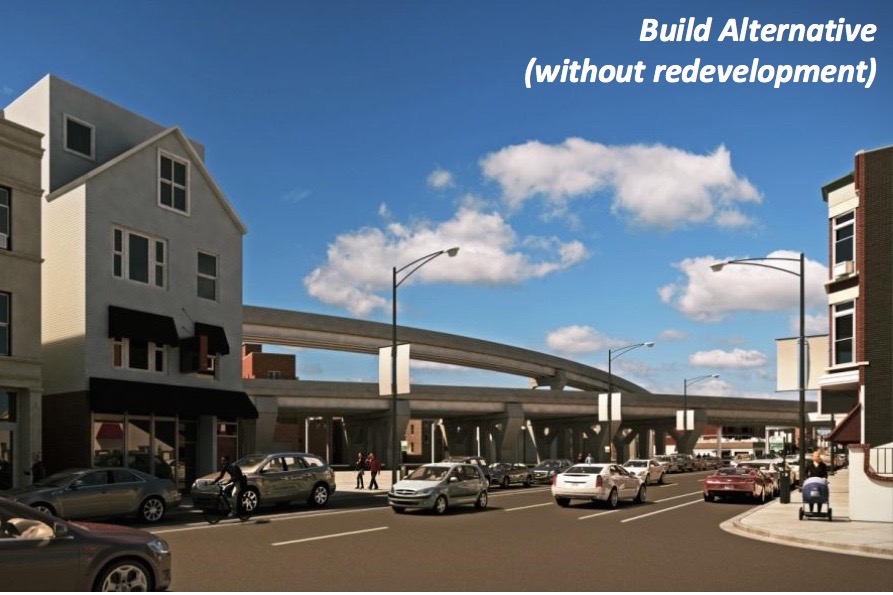 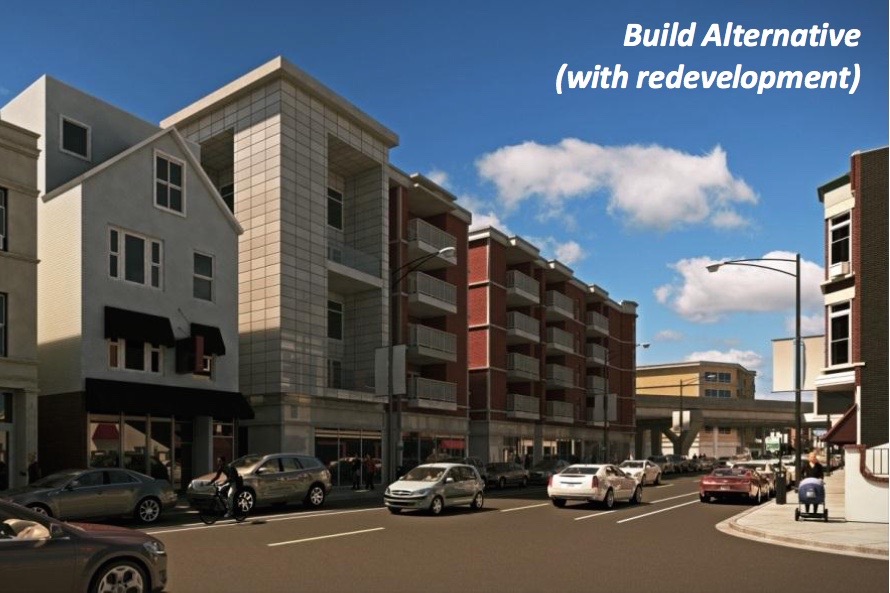 Redevelopment would be vital to keep the Lakeview neighborhood flourishing. This rendering depicts the northwest view from Clark Street and Buckingham Place with and without redevelopment. [CTA]

Early work would include demolition of 16 buildings and moving utility lines. Afterward, train operation would be impacted when construction of the new bypass and track structure begins, with Red and Purple line trains running on the same tracks. Street closures would also be required.

The CTA also said service disruptions would occur on weekends and off-peak period, while shuttles would be used on some weekends for Brown Line riders between Belmont and Sheffield and Red Line riders from Belmont to Addison.

The assessment, part of the required federal review process for the Red and Purple line modernization program, details various alternatives that were rejected due to increased costs or a greater number of property displacements, the CTA said.

Eliminated alternatives included doing nothing, building an underground tunnel for the Red and Purple lines north of Belmont, using the eastern or center track as a bypass or stacking tracks.

Since the Vautravers building, 947-949 W. Newport Ave., is a designated historical building, the CTA is required to consider moving it or preserving its historic elements. Depending on the feasibility, the CTA said it would prefer to move the building about 29 feet west of its existing location. 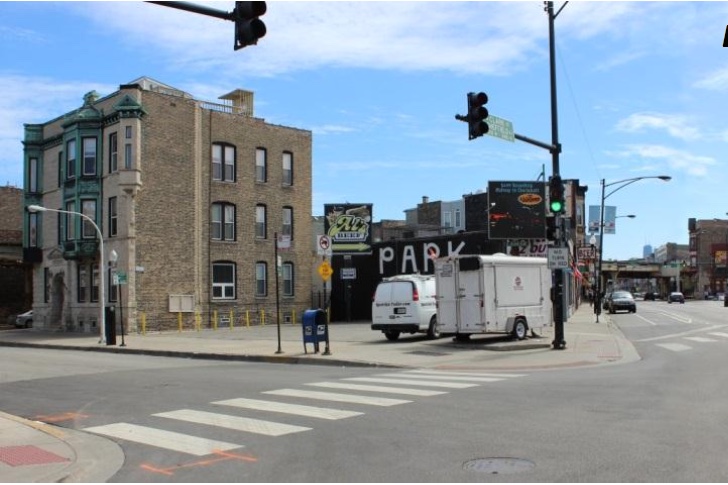 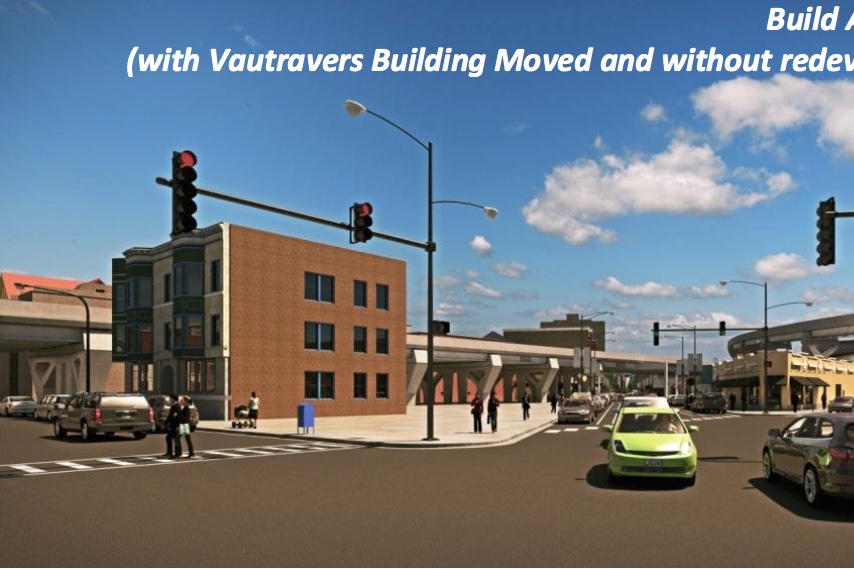 The historic Vautravers building could be relocated to make room for the Brown Line bypass. [CTA]

It might sound odd, but it's been done in Chicago before. In 1929, Our Lady of Lourdes Parish in Uptown was moved across the street due to the widening of Ashland Avenue and a need for increased church capacity.

In addition to the $320 million price tag, another $250 million would be spent repairing the Brown Line track structure and modernizing the Clark junction signal system.

The CTA has been down the rocky road of neighborhood contention before; residents were similarly opposed to the Brown Line extension project five years ago, said Chase, who lived in Ravenswood at the time.

"They were very vocal — 'This is terrible, it will drive businesses out' — and in fact, the opposite has happened. Southport has changed dramatically, and it's a huge, great example of what happens when you invest in transit," Chase said.

Chase said since the project was completed in 2010, 15 percent of all city construction permits have been issued near Brown Line stations, while median home values grew by more than 40 percent from 2000 to 2011 (twice as much as in the Red and Purple line areas). Ridership has also grown by 45 percent. 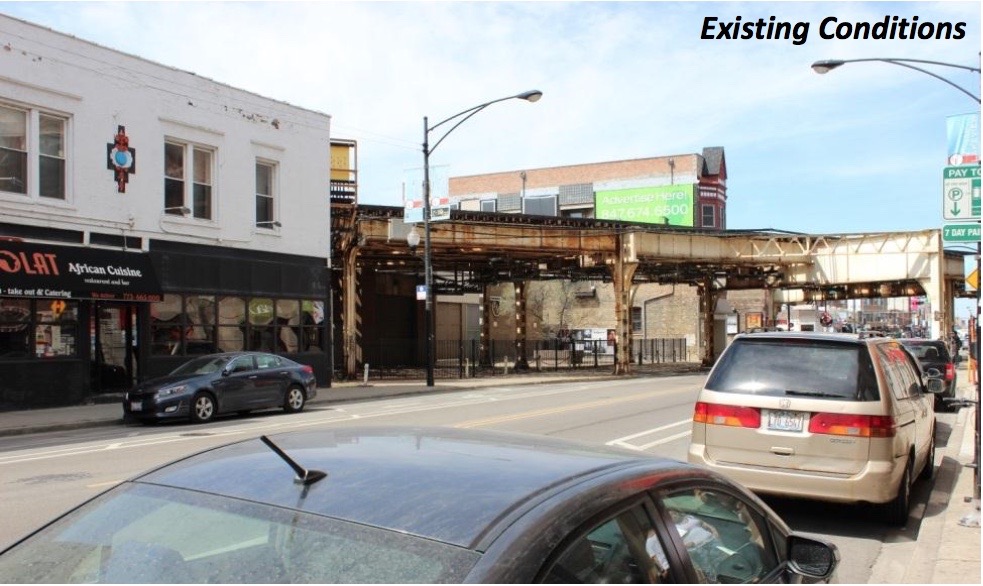 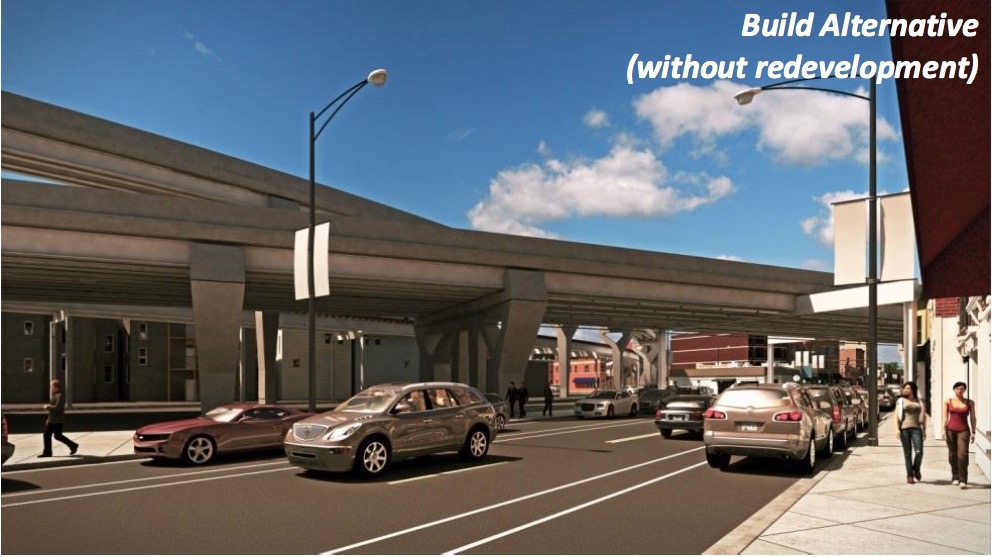 Residents are invited to attend a public hearing about the assessment from 6:30- 8 p.m. June 3 at the Center on Halsted, 3656 N. Halsted St. Written comments can be sent through June 18 to RedPurpleBypass@transitchicago.com.

By 2040, 185,000 new residents are projected to move into the Red and Brown line service areas, according to the Chicago Metropolitan Agency for Planning.

"Ridership has gone up for rail for a number of years, and we don't see it slowing down. We know that trends are not going to go backward, and we have to plan for the future," Chase said. 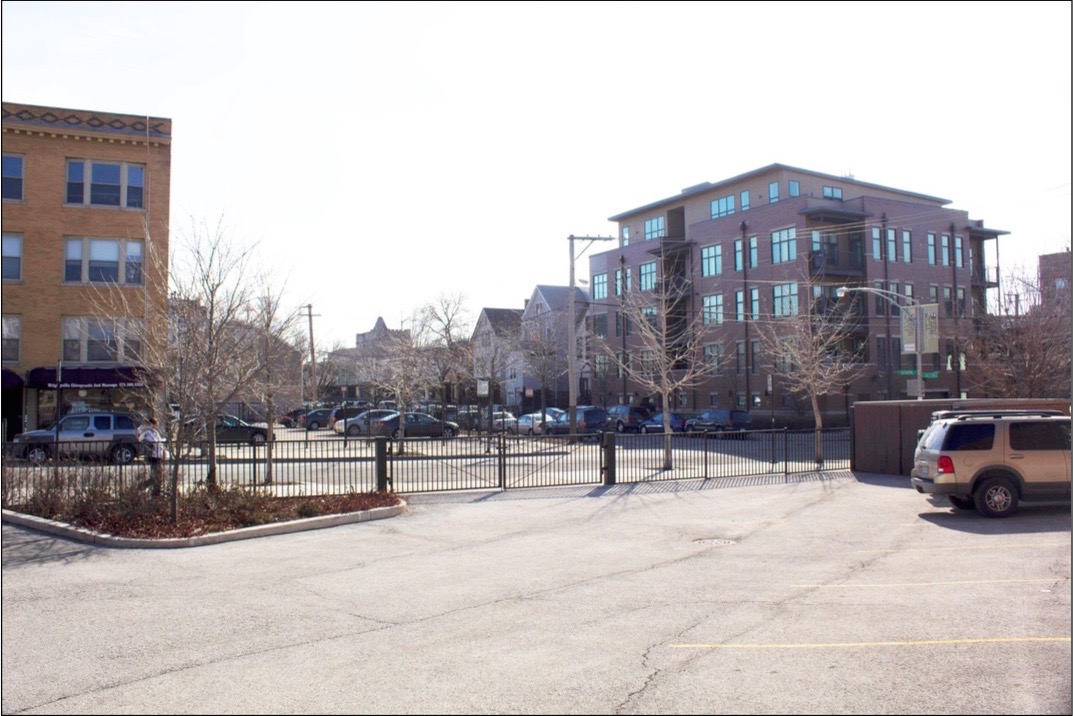 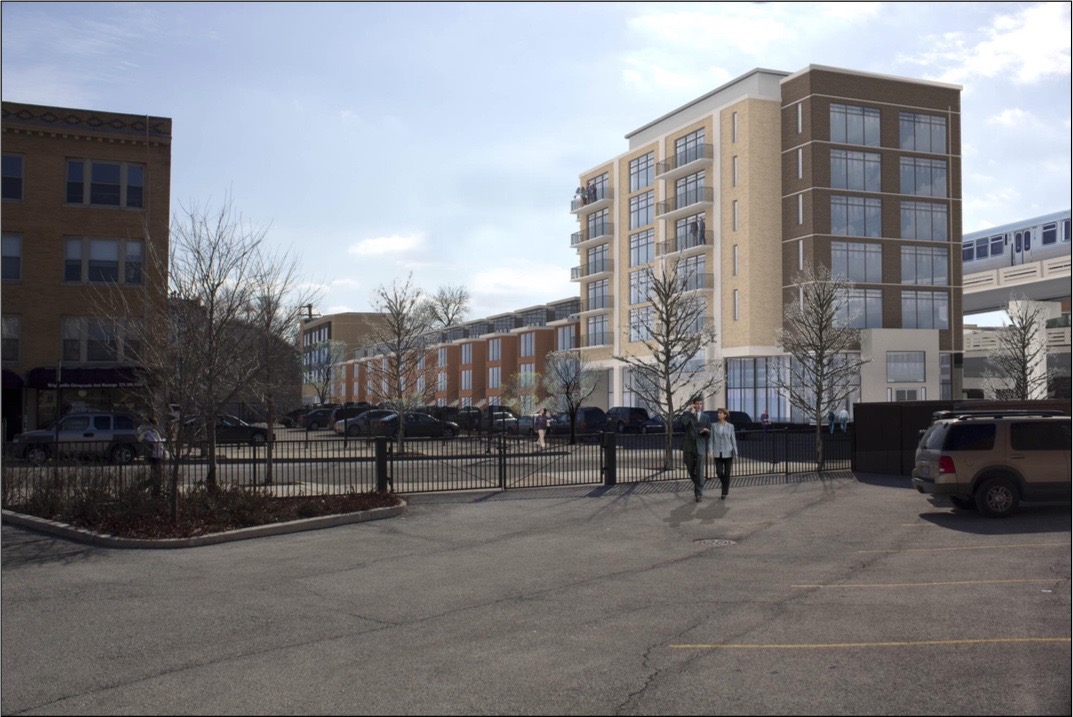 This rendering of the southwest view from School Street and Wilton Avenue depicts the flyover and potential redevelopment, which would be independent of the CTA's plans. [CTA]