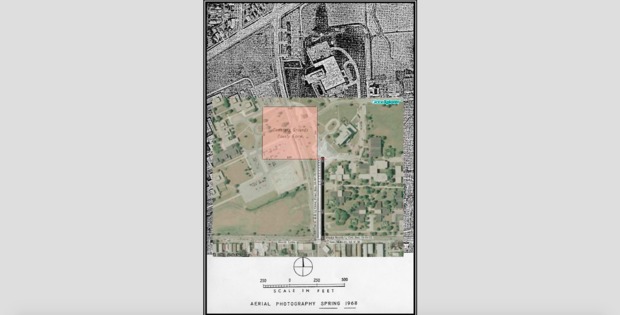 A map from 1968 shows the 6-acre cemetery that could be disrupted by the rebuilding of Oak Park Avenue. [Northwest Side Historical Society/Frank Suerth]

DUNNING — City officials postponed plans to rebuild Oak Park Avenue amid fears that the work could unearth thousands of bodies buried in a long-forgotten Dunning cemetery that holds the remains of Chicago's poorest and sickest residents who died between 1890 and 1912.

Ald. Tim Cullerton (38th) said Friday city crews would use ground-penetrating radar and consult an archaeologist before beginning to rebuild Oak Park Avenue between Irving Park Road and Forest Preserve Drive, a project that had been scheduled to start in April.

DNAinfo Chicago first reported that as many as 10,000 bodies could be buried under what is now Oak Pak Avenue in a 6-acre cemetery on the grounds based on the work of Barry Fleig, the former cemetery chairman of the Chicago Genealogical Society.

"We're going to take a more cautious approach," Cullerton said. "We're hoping to do everything the right way. We don't want to disrespect any remains."

Heather Cherone says the city will consult with an archaeologist:

Oak Park Avenue is set to be rebuilt, and will get sidewalks, streetlights curbs and gutters. [DNAinfo/Heather Cherone]

More than 2,000 babies were buried in the cemetery, Fleig said, citing county records and coroner's reports.

"This is an entire cemetery that has been forgotten about," said Fleig, who is putting together a database of about 38,000 Chicagoans buried in what is now the heart of Dunning, but was once the grounds of a Cook County poorhouse and later an asylum for the mentally ill.

In 1990, caskets were discovered in the northeast corner of the cemetery near Irving Park Road and Oak Park Avenue during a project to repair a steam line, Fleig said. That work was abandoned after the discovery, he added.

Starting in the 1850s, poor and indigent Chicagoans were buried by the county on 20 acres near Berteau and Naragansett avenues near the county poorhouse. The 6-acre portion of the cemetery opened in 1890 near Irving Park Road and Oak Park Avenue, and about 17,000 people were buried there.

The cemetery stopped accepting most new burials after the state bought the 320-acre property in 1912 and built a mental institution.

The memorial park is next to 23 acres of wetlands and woodlands slowly being restored by park advocates to their natural state.

Work is underway on a $70.5 million facility on the west side of Oak Park Avenue near Irving Park Road that will house 200 veterans who suffer from Alzheimer's disease and dementia.