CHICAGO — A River West resident believes a local towing company moved his car from a legal parking space on a public street to a private lot, photographed it — then towed it to an impound lot and charged him a $218 fee.

Sean Bresnahan, 34, a senior project manager at a Loop design and construction firm, said he's waited for months to get a refund and an apology regarding the incident that took place last fall when his Ford Focus was parked near his home in River West.

In a complaint he filed with the Illinois Commerce Commission against Rendered Services, 3611 S. Iron St., Bresnahan said he had parked his car legally and said an eye-witness saw the whole thing happen. 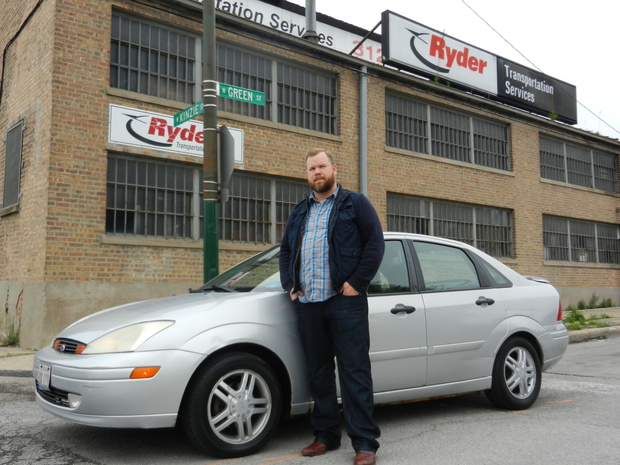 Sean Bresnahan at the intersection of N. Green and Kinzie St. in front of the Ryder Transportation building that captured security video of the alleged towing incident. [DNAinfo/Mark Schipper]

“The tow truck driver pulled my car into the [private] lot thinking no one would notice and that it would be my word against his,” Bresnahan wrote in the complaint on the incident on Sept. 23, 2014. " .... Rendered Services towed my vehicle illegally, took pictures AFTER they moved my car, and stole my vehicle until I paid them for it."

Maria Fedele, a general manager at Rendered Services, said she didn't know why the company was raided in November and despite the media reports, said Rendered has never been accused of moving cars from a public street to a restricted lot before towing them. She said the company was in good standing with the state of Illinois.

"Well, if that was the incident happening, then the Illinois Commerce Commission wouldn’t renew our license, which we do every two years," Fedele said. "... We’ve been doing this for more than 28 years and there’s never been a problem with the business license."

When Bresnahan arrived after 11 p.m. at Rendered’s yard to pay the fine to release his car last fall, he said the company told him they’d towed him from a restricted lot on 701 W. Kinzie St.

But Bresnahan said he parked in a spot on North Green Street that he could see from his nearby apartment window — and had texted with his girlfriend who later had parked next to his car.

“I texted it to her and sort of guided her in as she was driving,” Bresnahan said. “We sent text messages back and forth about where she’d ended up, which was right next to me with a car on either side.”

Sometime after 10 p.m., Bresnahan said his girlfriend had looked out the window and said, “You know, your car is gone?”

Both his girlfriend’s car and another car remained parked on either side of his now-empty space, according to Bresnahan. 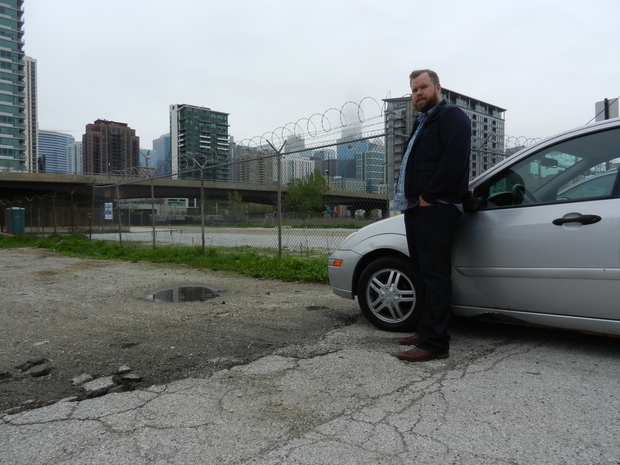 Sean Bresnahan poses in front of his car in the same parking spot he used on N. Green St. the night he was towed. The Rendered Services signage both he and the eye witness say his car was photographed in front of before being towed can be seen on the fence. [DNAinfo/Mark Schipper]

A construction worker has since come forward soon after and said he saw what had happened to Bresnahan’s Ford.

According to Jeff Barnes, the construction worker, the tow truck driver first moved Bresnahan’s car from the street to a private lot before towing it for good.

Barnes and a building crew were using a fenced-in yard at the southeast corner of the intersection to prepare micropyles to be sent along the railroad tracks to a high-rise project along the Chicago River.

“We pay a lot of attention to what’s going on down there,” Barnes told DNAinfo Chicago. “It’s Chicago, who knows, somebody could come shoot us.”

Barnes had noticed a tow truck approaching Bresnahan’s car parked on Green Street, and says he kept an eye on it.

“The tow truck backed up to him, hooked up to him, pulled him about 40 feet down alongside that fence where that sign says no parking, and dropped his car,” said Barnes. 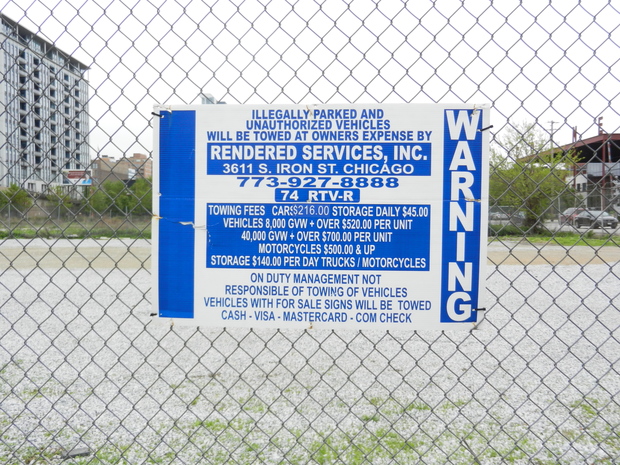 Close up of the Rendered Services sign Bresnahan says his vehicle was placed in front for a photograph before being towed. [DNAinfo/Mark Schipper]

At that point, Barnes said, the driver got out of the truck and did something around the car. He could not be certain a photo was being taken, he says, but the truck was unhooked from the car, pulled forward, and the tow truck driver went back to Bresnahan’s Ford.

“Then, he hooked back up to the car and towed him away,” said Barnes. “And I’d bet anything they had a picture of his car in front of that no parking sign.”

Barnes said Chicago Police detectives told him they had security video from a Ryder Transportation Services center at the intersection of Green Street and Kedzie Street.

A spokeswoman for Ryder towing said their security videos are erased after 60 days and the only remaining copies would be with detectives.

A Chicago Police spokeswoman said the investigation into the case is ongoing and wouldn't comment.

"This is a Chicago Police Department investigation and ICC is assisting as needed. However, we cannot comment on another agency's investigation," said Kelly Klopp, of the commission's external affairs.

Bresnahan said a representative from the tow company told him over the phone that the company had a photo of his Ford parked in the restricted zone on Kinzie Street. But Rendered Services refused to provide him the photograph, Bresnahan said.

“I said, ‘Show me that photograph and I’ll tell you right now if you’re a liar or not,'” he said.

Fedele said photos only are given to the Illinois Commerce Commission or Better Business Bureau and aren't shown to customers.

"We’ll tow 500 cars in a week and I’m not going to be showing them a picture, no," Fedele said. "I can’t be downloading photos for everyone who wants to see them, I have other jobs to do here."

"A driver moving someone’s car, photographing, then towing it? I just can’t believe that would happen," Fedele said. "That would be a good reason to fire that driver. You get somebody crooked in every organization and that’s would you should do, get rid of them. If you’re doing something illegal you shouldn’t be doing this kind of work."