RIVER NORTH — The developer who wants to replace Ed Debevic's with a high-rise served up a plan for a 22-story apartment tower to River North neighbors at a pizza place Tuesday.

Chicago-based JDL Development made its first pitch Tuesday for the development it hopes to build at 640 N. Wells St., which would also include retail, 117 parking spaces encased within the tower, and an adjoining two-story building that could house a doggie daycare or some other facility serving a new dog park nearby, JDL President Jim Letchinger said.

Designed by Chicago-based Hartshorne Plunkard Architecture (HPA), the 22-story, 251-unit tower would feature "fritted" or porous glass, a three-story lobby, and offsets that convey a "horizontality" to passersby, HPA Partner James Plunkard said. The tower would include convertible, studio, and one to three-bedroom apartments, and because of its design and unit mix, would offer 180 different floor plans.

"What we didn't want to do is just a flat, glass box," Letchinger said. 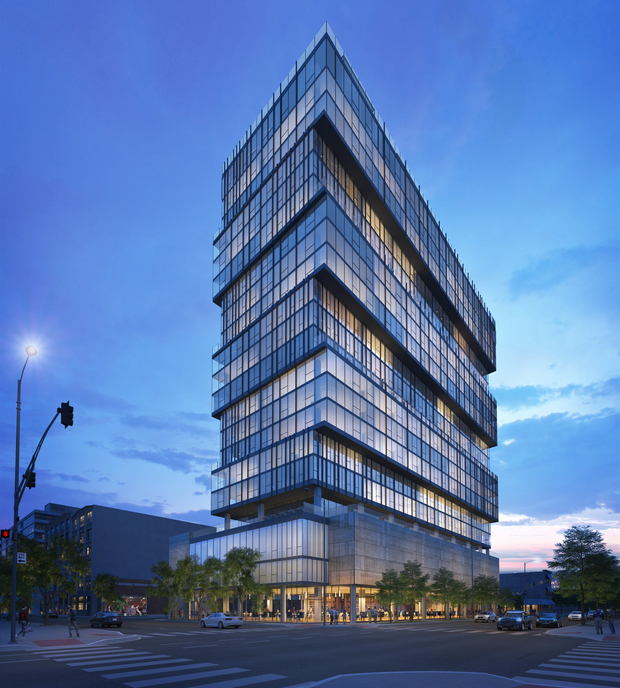 A rendering of the tower at dusk [HPA]

If built, the project would be the latest from JDL, which also developed 1225 Old Town, Halsted Flats in Lakeview, and is preparing to break ground on a 66-unit luxury condominium tower in the Gold Coast.

Letchinger said the proposal does not require a zoning change, but must be a city-approved planned development because of its height. If approved, he said he would like to begin construction in November.

David Matthews outlines the timeline moving forward for the site:

Reilly, who said the development site lies "probably 80 feet" from his balcony, said the proposal joins an "unprecedented" backlog of about 80 pending Downtown developments.

A few concerns about loading and traffic were raised Tuesday, but traffic consultant Michael Werthmann of KLOA Inc. said the tower would likely produce no more, or even less traffic than what's currently generated by the Ed Debevic's diner.

The RNRA has already thrown its support behind the plan, while Reilly called Tuesday's meeting "the beginning of a public process to vet this proposal."