RIVER NORTH — Culinary students at the Illinois Institute of Art were used to the gawkers. For the past 16 years, they cooked in kitchens with broad windows that looked out onto Wabash Avenue.

The view didn't get old. The stoves did.

In February, the school moved the bulk of its culinary program from the Loop to River North Point, 350 N. Orleans St., where its fashion, design and media programs and administrative offices already reside.

Meanwhile, those kitchens back at 180 N. Wabash Ave. won't be dormant for long. Community Services West Career Academy, a culinary high school for at-risk students, is moving there from North Lawndale, where it has been since 2008. The move will be complete by July 1, Principal Bertha Buchanan said.

There is no longer a street view at Evolve Bistro. Its entrance at 350 W. Mart Center Drive on the south side of the building isn't even marked by a sign, though that is coming. Still, being under one roof with the rest of the school makes up for the current lack of visibility, said chef Elizabeth Sweeney, the school's culinary director.

Plus, she said, there's a captive lunch crowd among the building's tenants, which include the Chicago Sun-Times and Holiday Inn. People who work in the building get a 25 percent discount at the restaurant.

All culinary students are required to work an 11-week stint at the 58-seat bistro, both in the kitchen and front of house.

The small-plates menu changes every two weeks. Customers can order a la carte or choose three plates for $20.

"We focus on seasonality and pull from international cuisine," Sweeney said.

Spain is the inspiration for this week's menu, which lists some 16 dishes, including ajo blanco gazpacho, ham and Manchego croquettes and olive oil cake with candied Marcona almonds. 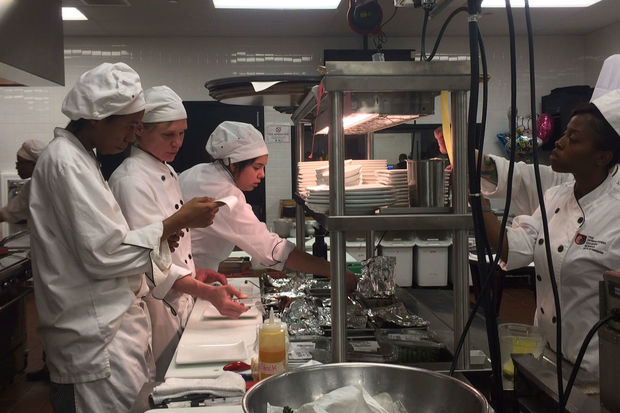 Culinary students work in the kitchen at Evolve Bistro, the student-run restaurant at the Illinois Institute of Art. [DNAinfo Chicago/Janet Rausa Fuller]

The restaurant is ramping up a sustainability initiative started last quarter, with more of a focus on sourcing and seasonality of food and developing relationships with like-minded vendors.

Local purveyors include Nichols Farm, Testa Produce and Fortune Fish and Gourmet. The coffee is a Sparrow Coffee custom blend.

It's not enough to know how to sear a salmon filet. Students also need to understand how that fish got to them and the difference in wild-caught versus farm-raised, Sweeney said.

They're no longer using plastics in the kitchen, they've switched to plant-based, biodegradable containers and green cleaning supplies and they recycle and compost, all "baby steps" toward their goal of getting green-certified within a year, Sweeney said.

There are only a handful of student-run restaurants nationwide that have earned such certification from the Green Restaurant Association. Those include the vaunted Culinary Institute of America in Hyde Park, N.Y. and two culinary schools in California.

Advising Evolve Bistro in its green efforts is chef Michael Howe, an Illinois Institute of Art instructor and co-owner of The Grey Plume in Omaha, Neb. It was the first restaurant in the country to meet the association's highest certification standards.

The Grey Plume's chef, Clayton Chapman, is an institute graduate. Chapman, a James Beard Award semifinalist, was just in town last week, not to attend the Beard Awards but to teach a class at the school, Sweeney said.

For now, Evolve Bistro is open for lunch, 11:30 a.m.-2 p.m. Wednesdays through Fridays. That schedule will likely change depending on the month and as Sweeney and staff have a better handle on customer traffic, she said.