Kanye West is Now a Doctor, Sort Of: Watch His Bizarre Acceptance Speech

DOWNTOWN — Kanye West, the enigmatic rapper from Chicago who briefly attended the American Academy of Art on Michigan Avenue before rising to worldwide fame, is a college dropout no more.

Recognizing him for his "transformative, genre-defying work," the School of the Art Institute of Chicago awarded West, 37, an honorary doctorate Monday afternoon.

Before beginning his acceptance speech, West took two trips across the stage to remove the water bottles that were stacked on the shelf of the clear lucite podium at front of the Auditorium Theatre stage.

The gesture was perhaps a nod to the rumor that West is designing his own water bottle.

West's brief speech drew several laughs and cheers from the crowd of students, family and onlookers.

"People say you should not be sorry for your opinions," he said. "George Bush..."

Laughter and cheers interrupted before the rapper and fashion designer could continue.

West noted that the honorary doctorate would help legitimize him as an artist, which he said would "make your lives easier, [for] two reasons."

Listen to Kanye West's speech after receiving an honorary doctorate:

"You don't have to defend me as much," he said. "And I'm going to make all of our lives easier. And it's these Floyd Mayweather belts that are needed to prove what I've been saying my entire life.

"Whether it's the co-sign of Paul McCartney grabbing me and saying, 'It's okay, he doesn't bite white people.' Or the New York Times cover. Or the Time 'Most Influential' cover. And now, a doctorate at the Art Institute of Chicago."

West said that during a recent visit to Oxford, he name-dropped the Art Institute, saying "when I went on that mission to create in other spaces — apparel, film, performance — it would have been easier if I could have said I had a degree at the Art Institute of Chicago."

During his introduction, Nick Cave, professor of fashion design and a contemporary artist, specifically celebrated West's recent foray into fashion.

"Kanye West steps onto the platform of 'what if,' " Cave said. "We all know Kanye to be a musician, but there is a rise of a new artist on the catwalk. Yes, Kanye featured his first fashion collection this year during fashion week."

West, whose first three album titles played off his brief stay in academia, announced he would receive the accolade in March on French television.

The School of the Art Institute called West "the most decorated and acclaimed artist of his generation," in a statement Monday.

The son of the English department chair at Chicago State University, West first won fans in the mid-2000s by casting himself as an atypical, self-conscious rapper who grew up in the middle class wearing pastel Polo shirts.

He quickly became one of the country's most popular music artists, but also one of its most polarizing, drawing criticism for his outspoken remarks and interrupting Taylor Swift's acceptance speech at the 2009 MTV Video Music Award.

Having sold more than 30 million albums worldwide and garnered 53 Grammy nominations, West has since recast himself as a fashion designer and is married to reality star Kim Kardashian, establishing himself as a cultural mainstay (or "nucleus," as he's said).

West was in town Sunday and stopped by the Chicago Bulls playoff game against the Cleveland Cavaliers to pump up fans with a surprise performance of his song "All Day."

He later visited the Loop art school for an hour long question-an-answer session with students. 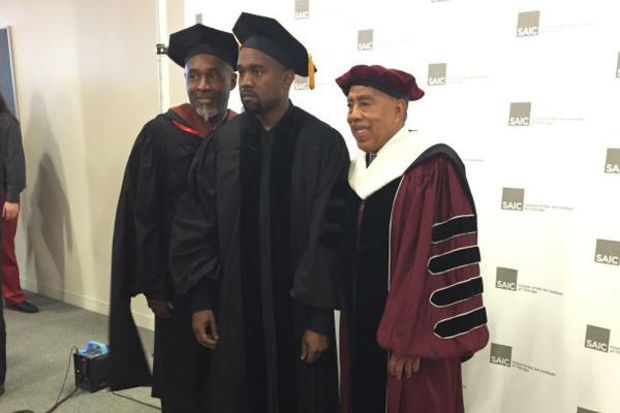 9-Mile 'Portage Museum' Could Transform The Northwest Side