SOUTH LOOP — Quick — can you recite the address of Tile Outlet?

If you know the store is at "twenty-four-forty-four West Fullerton in Chicago, just three blocks west of the Kennedy Expressway," you probably also know Nicole Rigan.

She's the bleach-blonde woman who's been delivering that line on local TV for 10 years.

"People still are like, 'You look just like this girl on the Tile Outlet commercial, but she has blonde hair,'" Rigan, 34, said. "I think I look a little tiny bit more put-together now."

The South Loop resident has since ditched what she called "nasty dead blonde hair" for brown locks and gotten a nose job after a car accident left her with facial injuries.

People are also surprised to learn the former actress isn't from the South Side — "it's naht in stahck" — but from Downstate Peru.

"I could [film] a new one with a British accent," Rigan joked.

Rigan works for Gregg Helfer Ltd., Private Jeweler at 5 S. Wabash, the same company she worked for when she used to spend her lunch break out on auditions.

Rigan was 24 when she landed the Tile Outlet gig in 2005 — and it felt like a big personal break, if not an industry "big break" for the actress.

She had been hit by a drunk driver while in a crosswalk a few months before, and a leg brace sidelined her from dance auditions, her other passion.

She'd also just been let go from a small speaking part in "The Break-Up," a movie starring Vince Vaughn and Jennifer Aniston. She was told the production was going with "a hotter girl."

"They're very cut-throat," Rigan said of the acting business. "I was so upset, and I had already been in the accident, so I felt really down on myself."

Rigan didn't think she had a shot for the Tile Outlet spot, but when she walked out of the audition she knew it was hers.

"I thought, 'Oh my God, if I got that commerical, it would be so awesome because it's on all the time,'" Rigan said, remembering the spokeswoman in the Tile Outlet commercials that aired before hers.

And it is on all the time.

"When you're young, you're like, 'Whatever, play it forever!'" Rigan said, laughing.

It took only a couple of hours to film the seven commercials at the tile warehouse, and Rigan did each one in one take.

Now living in the South Loop with her husband, Kenneth, and 10-year-old miniature Pinscher, Roxy, Rigan said being a known face in Chicago has its downsides. She gets extra attention from "dirty men," and people rudely ask her if she's rich because the commercial has aired for so long. (For the record, she got paid once, when she filmed it.)

But still she has a sense of humor about her local celebrity, even when people aren't nice.

"It's very easy to make fun of this commercial and myself," Rigan said, adding that she's seen comedians and online commenters make fun of her clothing, hair, accent, you name it.

But Rigan can laugh at her younger self, too.

"I think it's hilarious," she said. "The whole acting thing made me more confident. It just gives you [more confidence] to do a lot with the world."

Rigan landed roles in commercials and independent films, but decided to quit acting and dancing about a year after filming the Tile Outlet commercial. Since then, she's taken her work in new directions.

Rigan is passionate about rescue animals, and it was her idea for her employer to partner with the Anti-Cruelty Society. 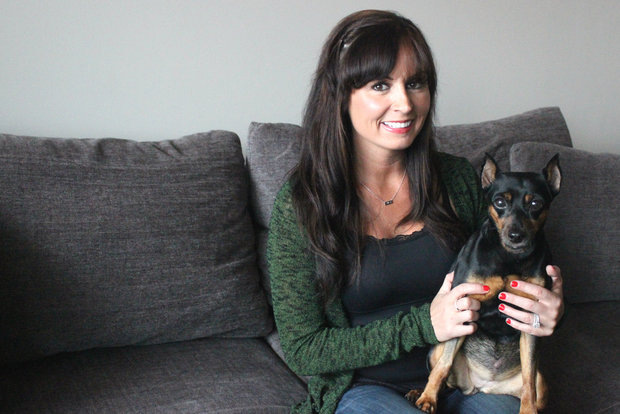 Jewelry customers who mention the Gold Coast shelter can have part of their sale donated there, and the jeweler often donates jewelry to Anti-Cruelty society auctions and fundraisers.

Though she's more focused on animals than acting these days, there is one thing Rigan would come out of retirement for: "I'd be up for doing a new commercial, [Tile Outlet doesn't] even have to pay me," she said.

"It's annoying and catchy, but everyone knows about it. I think [the store] should definitely stick with having some annoying person on there."