The demolition of the decaying structure will make way for 267 residential units, around 350 parking spots, public green space (possibly the sought-after Logan Square orchard) and new retail outlets — if developers at Terraco Inc. are approved for a zoning change and eventual construction at the site, located at 2500 N. Milwaukee Ave.

In addition to a new focus on residential units paired with 1:1 bike parking, a bike tech room and a rooftop herb garden, the proposal could come with the installation of a new traffic light and a 40,000 to 45,000-square-foot grocery store at the site, Gendell told a group of around 250 people in attendance at the community meeting Thursday night. 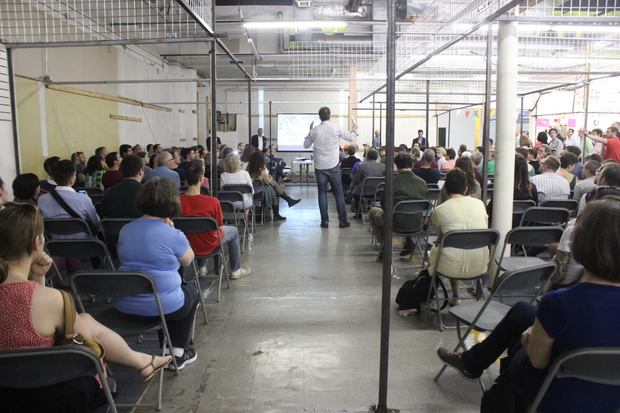 The meeting was led by Ald. Scott Waguespack, developer Scott Gendell, architect Joe Antunovich and other members of the Terraco team, who took turns describing amenities at the Logan’s Crossing proposal paired with renderings of the 2.7 acre lot, located within walking distance of the Illinois Centennial Monument and Logan Square’s central district.

Gendell and co. have insisted that no grocer has been selected for the Logan’s Crossing development, but that hasn’t stopped rumors in the run-up to the meeting, and it didn’t stop a series of questions Thursday night.

While many have insisted that the Mega Mall lot isn’t a good fit for a full-service grocer — and some have suggested that an express-style store a la Target Express is in the works — Gendell hedged Thursday, only noting that Mariano’s has already declined the location (though not outright denying an express outlet).

Jewel and Whole Foods were also noted by Gendell as grocery stores with outlets in the size range sought for Logan’s Crossing. Trader Joe’s, however, is likely out of the question.

Little is certain about the Logan Square orchard — aside from it potentially being located on a lot adjacent to Terraco’s Mega Mall parcels on the northern end (though that land is not owned by the developing company.)

Gendell has expressed interest in the orchard since the early inception of Logan’s Crossing, but progress has moved at the slowest possible speed. If eventually constructed, the orchard could end up being moved to an adjacent Chicago Transit Authority-owned parcel that has been ostensibly greenlit for green space and/or public space.

The orchard concept is also backed by Waguespack.

Comments from Logan Square Neighborhood Association Housing and Land Use co-chair Daniel LaSpata received some of the most raucous cheers of the night as the affordable housing advocate argued for the inclusion of low-cost units above and beyond the Affordable Requirements Ordinance at Logan’s Crossing.

“We would encourage the alderman and the developers to envision that 10 percent [affordable housing requirement] as a floor rather than a ceiling, which would go a long way to keeping families in this city and keeping our neighborhood diverse” LaSpata said.

While stopping short of panning the project, LaSpata wanted large, 2-3 bedroom units be set aside for affordable housing and that income requirements to qualify be set between 30-50 percent of average median income. He also wanted pushed Terraco to set aside a percentage of retail space for low-income and first-time business owners to “continue the tradition of what [the Mega Mall] was and what it’s becoming.”

“The Mega Mall has always been a place where you could take a little space and make it your first business,” he said, arguing that a similar incubator-style space should be set aside among new retail planned for Logan’s Crossing.

Affordable housing was also on the agenda for a small but vocal group of attendees from We Are/Somos Logan Square, who cautioned against displacement of long-term residents and encouraged continued interaction with community residents for input throughout the development process.

Though short on specifications at this early stage, Gendell maintained his support for affordable housing and the inclusion of an incubator-style program, including the return of at least one soon-to-be former Mega Mall shop owner — one of three remaining Mega Mall tenants — who operated her jewelry outlet throughout the meeting. 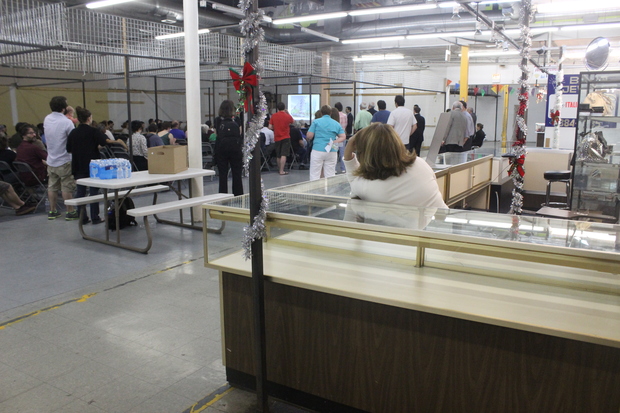 “We want those companies to not just be something you could get anywhere — we want it to be something unique to Logan Square,” Gendell said, noting that art from Logan Square’s Penny Pinch is featured on a wall in his Lakeview home.

There are currently no plans to remove or alter the art-covered “Mega Wall,” a Galerie F art project located between the Mega Mall parking lot and the Blue Line tracks, Gendell said.

Perhaps the strongest criticism of the Logan’s Crossing proposal came from residents who questioned the scale, size and look of the staggered-height buildings, which range from 4-7 stories across its length.

“We have several concerns about the development as it is currently proposed and hope Terraco will consider making revisions that will make these buildings integrate more effectively with the surrounding community,” Logan Square Preservation president Andrew Schneider said.

Schneider noted the group’s general preferences: decreases in height and density, some tweaks to the tenant profile with the addition of a local business incubator, the elimination of a curb cut on the lot's northern end and a significant change in plans for the building’s northern façade to facilitate a “landmark caliber building” more in tune with Logan Square’s historic streets.

The need to stay connected to Logan Square’s unique character was made several times throughout the night. One resident called the proposal “cookie cutter … with some thoughtful amenities.”

“That could be a creative solution to add to your personal success and bring in shoppers,” said Jami Primmer. “I’m just not seeing that here.”

“Match the scale and show a little more respect to the character of the neighborhood,” one neighbor said, while another looked to the future of Logan Square as new developments like the Twin Towers project, the nearby "L" building and the California Studios development are poised bring more than 380 units to the neighborhood — not including the 267 proposed for Logan's Crossing.

A second meeting is in the works, according to Waguespack, but in the meantime the alderman said he will continue to vet community responses and work on refinements with Terraco.

Terraco will not request Tax Increment Financing money, Gendell said, while acknowledging that rejection of the public funds will put a heavier limitation on changes to the plan.

“My preference is to not use TIF dollars [because] you can’t avail yourself of that vehicle lightly,” he said.

He hinted at issues rooted at the intersection of affordable housing, scale/density and the use of public funds.

Waguespack reiterated that he hasn’t agreed to a zoning change and will weigh options ahead of a final decision.

“I don’t like developers that come in and say ‘give me a zoning change,’ — then they’ll ask for 12 to 15 stories. But of course that’s never going to happen here” he said, undoubtedly alluding to one familiar new Logan Square development in particular.

“There are good developers and there are bad ones. The bad ones are the ones we have to chase down,” Waguespack said, adding that he’s worked with Logan’s Crossing architect Antunovich in the past. “They did a good job then and I would trust him to do a good job now.”

In the meantime, the Mega Mall, a 20-year old fire-damaged structure currently decaying from all sides, should be demolished as soon as possible, as it is a safety hazard, according to Larry Ligas.

“It’s serious, serious, serious,” Ligas said, pointing to obvious damage to nearly every quarter of the space, including the ceiling. “This project is good for everyone … but demolition needs to be done immediately.” 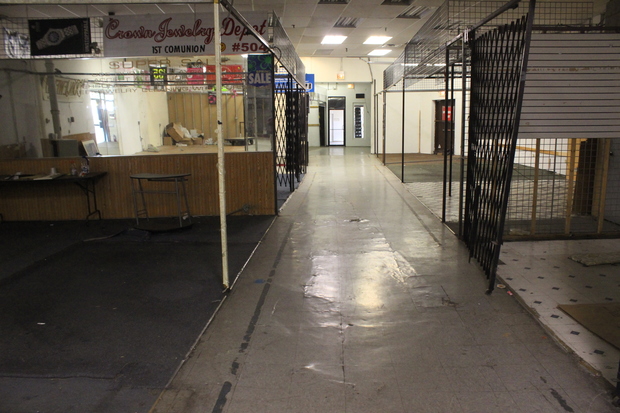