First 'People Spot' Under Construction on the Far Northwest Side

PORTAGE PARK — Work is underway on the first "People Spot" on the Far Northwest Side near Irving Park Road and Austin Avenue as part of a $600,000 city project to spruce up the Irving Austin Business District, officials said.

Although plans for the People Spot were initially dropped, they were resurrected by Joe and Melissa Basilone, the owners of Perkolator Café and the Thrift & Thrive resale shop.

"Now that we have Perkolator, there is so much more foot traffic," said Melissa Basilone. "It'll be really great to sit outside and enjoy the space."

Heather Cherone explains how the people's spot idea was reborn:

Although it is still being designed by city officials, the People Spot at Irving Park Road and McVicker Avenue will be "earthy" with plants and plastic and aluminum interlocking wood benches with 25 seats, Melissa Basilone said.

But the People Spot in the Irving Austin Business District won't take the place of any of the district's coveted spots, Melissa Basilone said. Instead, it will be located in what is now the fire lane outside Perkolator and the space created by a shortened crosswalk.

The Basilones will maintain the People Spot and store its parts during the winter months in Perkolator's basement. 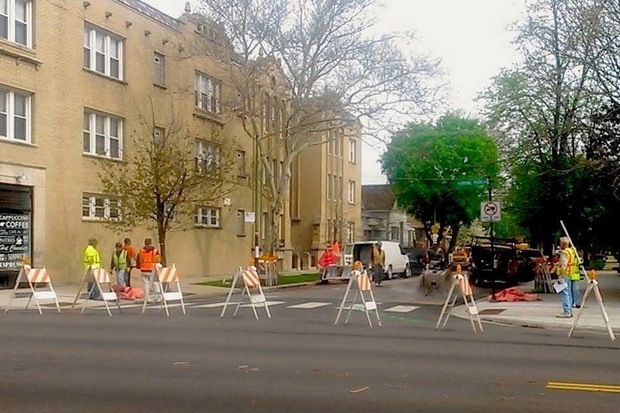 The streetscape project — which began this week after two years of discussions — will also include ramps at each corner to ease the path for wheelchairs, strollers and bicycles, officials said. Benches, bike racks and new trash cans as well as new trees and pots full of native plants will also be installed as part of the project, according to the plans.

"It has taken a long time," Melissa Basilone said. "But it is going to be great."

In addition, the district near Irving Park Road and Austin Avenue will get pedestrian-friendly crosswalks, bigger sidewalks and new metal light pole banners featuring the logo of the Irving Austin Business District from Austin to Meade avenues.

Three intersections will be "stamped" with a decorative circular design on the pavement in an effort to encourage drivers to slow down — and give the business district a distinctive identity.

Ald. Tim Cullerton (38th), who will retire in two weeks, said the project would give the area a badly needed facelift and boost business owners' efforts to bring new life to the district.

Basilone said she was hopeful that the work will be done by the fourth annual District Days event, set for June 19-20, which will feature an art show, a classic car show, a sidewalk sale, children's crafts and music.

"There are so many cute storefronts in the district that are vacant right now," Melissa Basilone said. "I really hope that this helps fill them."