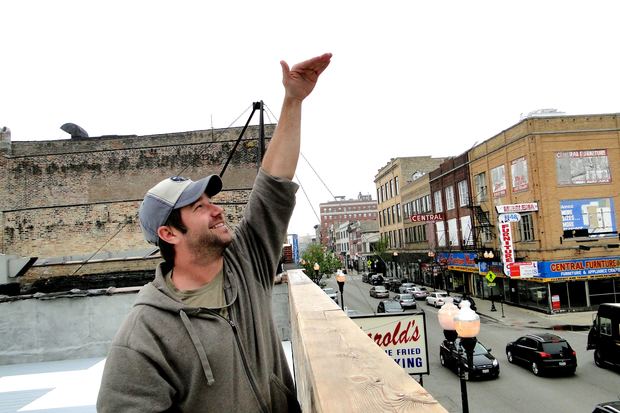 Chris Johnston, owner of Cheesie's and Whiskey Business, illustrates how much taller a wall along a rooftop deck will eventually be, so guests cannot be seen from Milwaukee Avenue, at the request of a neighborhood group. [DNAinfo/Alisa Hauser]

WICKER PARK — After predicting 2015 would be a wild ride, the owner of Cheesie's Pub and Grub and an adjacent '80s- and 90s-themed fry bar, Whiskey Business, has seen most of the year tied up in construction. But if the final leg goes as planned, both ventures and a rooftop deck could be open in July.

"We want to get this open so bad," said owner Chris Johnston, including general manager Tom Ivaska, who were onsite overseeing construction crews on Tuesday at 1365-67 N. Milwaukee Ave.

Once open on a fast-changing block of Wicker Park's Milwaukee Avenue, Cheesie's Pub and Grub, hailed by Esquire magazine readers as offering "the most life-changing grilled cheese in America," will join the recently opened Columbus Curry and neighbors Emporium Arcade Bar, Antique Taco and Harold's Chicken.

Alisa Hauser details what the new spot means to the neighborhood:

Combined with Whiskey Business, likely opening a few weeks after Cheesie's does, the Wicker Park location will be the third and largest for the independently-owned chain, which has a Lakeview spot that opened in 2011 at 958 W. Belmont Ave. as well as an Evanston outpost and a food truck.

"It's a good community with a laid back feeling," he said.

Currently, Johnston is in the midst of hiring workers to staff the Wicker Park Cheesie's and Whiskey Business, which will employ around 60.

The roof, spanning both restaurants but only accessible through Whiskey Business at 1367 N. Milwaukee Ave. will accommodate 120 people and feature composite flooring in the design of a Tetris screen. 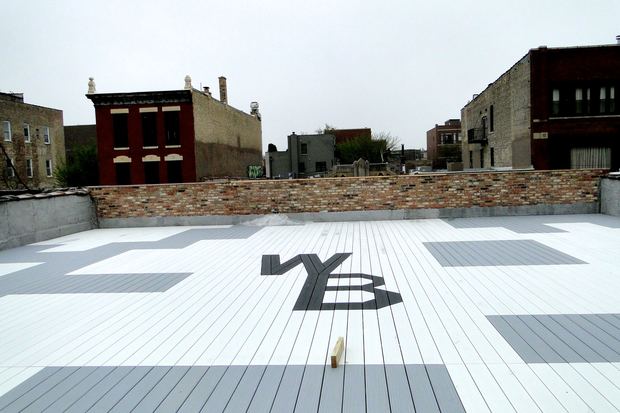 Though you can currently stand and look over Milwaukee Avenue from the patio, Johnston said workers are building an add-on to the wall, so patrons cannot be seen from the street, which was a request by members of a neighborhood group that supported zoning changes needed for the project back in December 2013.

On the main floor, Cheesie's will have a capacity of 95 patrons. Whiskey Business, which will offer round, conversation-friendly cushioned booths, will seat 60 diners.  An additional party room on the second floor for Whiskey Business will seat around 60, Johnston said.

Whiskey Business will offer up to 20 choose-your-topping Poutine dishes in an atmosphere themed around the 1980s movie "Risky Business."

Johnston said that French fries will be the main focus of the fry bar, though there will also be other items such as pork chops.

Whiskey Business' drinks will include several types of whiskey and craft beers, along with non-alcoholic and alcohol-infused smoothies, with flavors such as Mud Slide, Granny Smith Apple and Orange Dreamsicle.

Also in Johnston's pipeline, albeit a much smaller project, is a 600 square-foot Cheesie's on the first floor of the Thompson Center, 100 W. Randolph St.

The Loop expansion, planning to open in September, will be geared to commuter crowds and offer a rotating selection of sandwiches and no alcohol.

"It will be more grab and go, more of a Cheesie's Express with a smaller menu but we will have delivery and people can take their sandwiches to the [lower level] food court to eat," Johnston said.