Gorski, an architect with the Bureau of Architecture and Design, took home the prize for best restaurant design for an establishment with less than 75 seats.

He shared the award with his business partner Tom Nahabedian, of Old Town.

The pair won the award for their work at Brindille at 534 N. Clark St. in River North.

Tom Nahabedian is cousins with the Carrie Nahabedian, the former executive chef of the Four Seasons Hotel Los Angeles at Beverly Hills.

Carrie Nahabedian opened Brindille in spring 2013 alongside her partner and Tom's brother Michael Nahabedian. The trio previously collaborated on NAHA. This acclaimed restaurant opened in 2000 at 500 N. Clark St.

Michael Nahabedian is also the restaurateur behind Chicago's Green Dolphin Street and Café Absinthe. Together, he and Carrie Nahabedian sought to create a place offering refined Parisian fare that celebrates their favorite spots in Paris.

For their latest restaurant, the Bureau of Architecture and Design was given complete control. This included not only creating the restaurant, but also the website, graphics and other elements, Gorski said on Tuesday 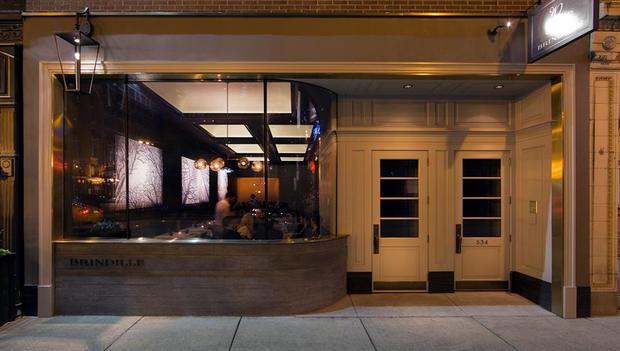 This is the most recent of four projects of the boutique architecture and design firm to win an award, Gorski said.

"This is a big one. This should be a game changer," Gorski said.

Gorski and Tom Nahabedian are two of just three architects who run the upstart firm along with a pair of interns at 20 W. Hubbard St. They started the firm in 2012.

"We have been working hard, and small firm struggles are real," Gorski said.

He believes the string of accolades — none bigger than the Beard Award — will help to boost the business. Gorski hopes to grow the firm and perhaps carve out a niche among budding restaurateurs.

Gorski was confident in the project ahead of the award ceremony. He worried a pair of rival finalists from New York might have an edge, as The James Beard Foundation is also based in New York.

"It's certainly great for the city that we beat the New York restaurants," Gorski said. "I'm taking it all in. It has been pretty fun."

A cookbook author and teacher, James Beard was a champion of American cuisine who helped educate and mentor generations of professional chefs and food enthusiasts.

The James Beard Awards are named in honor of the pioneering foodie once dubbed the "Dean of American Cookery."