STREETERVILLE — City officials are asking Chicagoans to vote for their preferred routes to better connect River North and Streeterville to the rest of Downtown, the latest step in a long saga to improve public transit.

The Chicago Department of Transportation and consulting firm Metro Strategies presented 13 different routes Thursday morning at Northwestern Memorial Hospital, asking passersby for their favorites. Among the ideas: a route from the Grand Blue Line Station in the Fulton River District to Navy Pier, and a Michigan Ave. route stretching from the Loop to the Gold Coast. 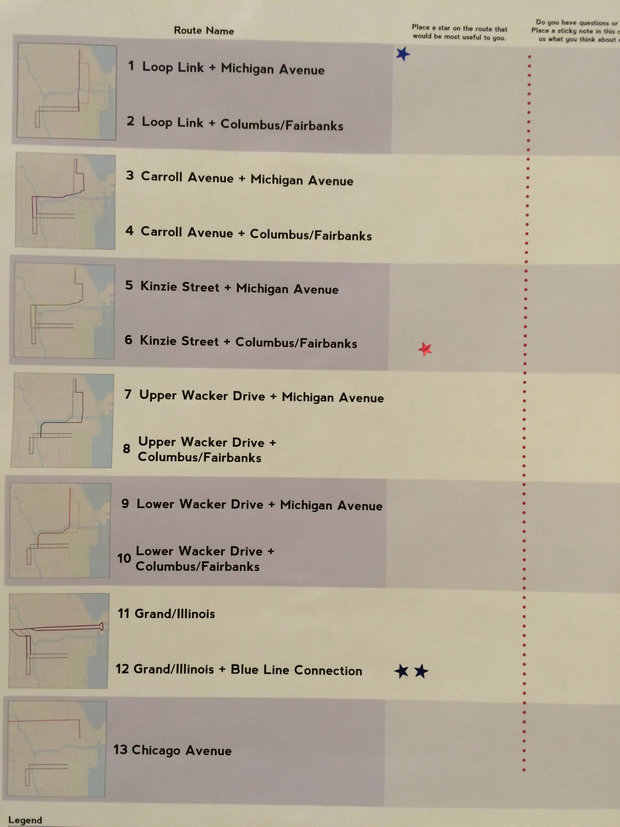 Residents are asked to cast their votes for the routes in general, independent of whether the route would be served by an express bus, train, or something else. The goal, CDOT says, is to arrive at three "feasible" options before a public meeting this fall.

Ideas that come out of that meeting would then be presented to City Hall for possible funding and installation.

"When it comes to funding, it could be a combination of more low-hanging fruit and more ambitious things," said Jeffrey Sriver, director of transportation planning and programming at CDOT.

The pop-up meetings are the latest effort to improve public transportation Downtown, with weekday "L" ridership at its highest level since at least 1960.

CDOT also recently began installing new express bus lanes in an effort to better connect the east and west sides of the Loop.

Though bus routes already exist on Grand and Michigan, CDOT officials and visitors at the pop-up presentation still believe River North and Streeterville are especially underserved by the Downtown transit system. Nearly 91 percent of people who work in River North or Streeterville live outside those neighborhoods, according to CDOT.

Matt Hayes, a South Loop resident who works at Northwestern Memorial Hospital, is one of those people. He believes it's especially important to better connect Streeterville to Ogilvie Transportation Center and other transit hubs in the West Loop, given Northwestern's recent merger with west suburban Cadence Health.

David Klinger, a Lakeshore East resident, agrees that getting around Streeterville is "awkward," especially given the plethora of new developments in the neighborhood. He's concerned some of CDOT's recommended routes may be redundant, but if planned correctly, that could be OK.

"You need redundancy, but on different routes," he said.

CDOT has not yet scheduled its fall public meeting. It will host another pop-up presentation from 11 a.m. to 1:30 p.m. at John Hancock Center, 875 N. Michigan Ave.