St. Pascal Mourns Cardinal Francis George, 'A Neighborhood Boy Who Made It' 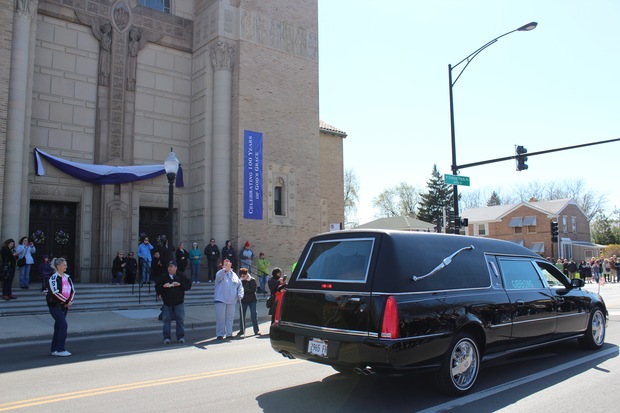 The hearse carrying Cardinal Francis George pauses at St. Pascal's Church, where the cardinal grew up and was ordained. (DNAinfo/Heather Cherone)

PORTAGE PARK — The Far Northwest Side gathered Thursday to mourn Cardinal Francis George, remembering him as the beloved favorite son of Portage Park who rose to the highest ranks of the Catholic Church.

Like many Northwest Side residents, Kathleen Vogt's extended family knew the cardinal and his family.

"I feel I knew him,” Vogt said while waiting for George’s funeral procession to pause outside St. Pascal. “He was a neighborhood boy who made it."

George's public struggle with cancer — after surviving polio as a child — was inspiring, Vogt said.

"He was ours," Vogt said. "He was our neighborhood boy."

The cardinal's death Friday brought the church together in its grief, parishioner Zully Guillen said.

"More people are coming to church," said Guillen, as she hugged her two youngest daughters, Lizbeth and Emily, in a cold breeze as news helicopters hovered above the church's steeple.

The cardinal's roots at St. Pascal make it possible for students who go to the church's school to dream big dreams, Guillen said.

"They can be whoever they want to be, just like the cardinal," Guillen said.

Before the procession stopped at St. Pascal, students and parishioners gathered in the school hall to watch — and participate in — George's funeral Mass, televised from Holy Name Cathedral in River North, reciting the prayers of the faithful along with Archbishop Blase Cupich.

Pictures of George as a child growing up at St. Pascal, as a priest and as the leader of the 2.3 million Catholics in Cook and Lake counties, framed the big screen.

Elaine Sabas, a 50-year member of St. Pascal, said she felt she should attend the cardinal's funeral, even if she wasn't able to head Downtown.

"The cardinal was one of our own," Sabas said. "He will be remembered for his kindnesses, and for how he remembered his roots."

Cupich remembered his predecessor as "a man of peace, tenacity and courage" who counseled and supported three popes, contributing to the governance of the church worldwide.