DOWNTOWN — Marlene Bailey and her husband, Bob, celebrated part of their 52nd wedding anniversary Monday as passengers in one of the city's 162 wheelchair-accessible cabs, getting to a doctor's appointment.

"It's all part of the aging process; you just go with the flow," said Marlene.

Bob, an 85-year-old retired lawyer, has been getting around by wheelchair since he broke his hip six months ago.

The couple, who met in Chicago in 1955 and returned to the city from Winnetka as soon as their children were raised, rely on OpenTaxi, a citywide network that dispatches wheelchair-accessible cabs. 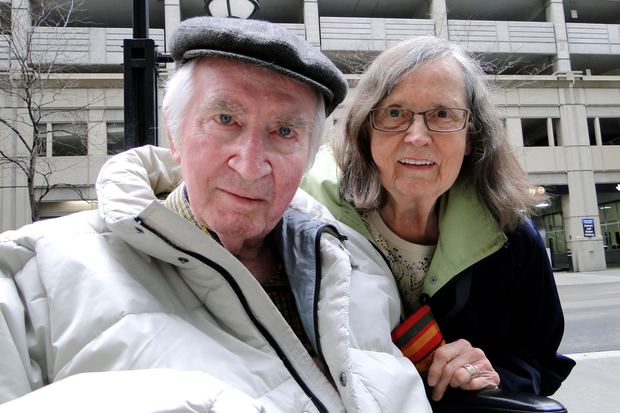 The Bailey's trip will likely be one of 75-plus rides that cab driver David Tuffs will complete this week, based on his productivity that, in addition to nominations from passengers who wrote letters of support, helped him win a free medallion.

Tuffs explains medallions and how Uber has changed the market:

There are 6,691 active taxicabs, with 162, or just 2.4 percent of the fleet, dedicated to accessible vehicles.  Tuffs is the third winner of a medallion, awarded annually by an eight-member committee to a driver of a wheelchair-accessible taxicab.

The open market cost of medallions reportedly averaged $298,000 each in November.

Now that he has his own medallion and can be be an owner-operator, Tuffs said he plans to buy a van by July. Having his own medallion means that he will no longer have to pay $100 per day, or $36,000 per year, to rent his cab from Flash Cab Co., he said.

According to Tuffs, the vans are overbooked and in high demand.

"I have a list of [other cab drivers] waiting to get mine," he said of his existing van.

While ride-sharing competitor Uber has thrown a "huge wrench" into the overall taxi industry, Tuff said his business, comprising a large and loyal clientele, has not been affected.

"It creates an automatic niche. At the end of the day you cannot do what I do unless you have a specialized vehicle," he said.

Michelle Garcia, a 38-year-old, Pilsen resident, rides in Tuffs cab about four times each week to get to her job as a community organizer for Access Living at 115 W. Chicago Ave. in River North.

"He goes over and beyond to make sure I am where I need to be at the time I need to be there. Sometimes I might be in pain because of my disability and I am slower. His patience makes him extraordinary, not just me, for others too," Garcia said.

"We need more Davids out there, more drivers overall. There is most definitely a shortage," Garcia said.

Garcia chooses to use taxicabs because it takes almost 90 minutes to get to her job on public transit and the free city-run ParaTransit service is "not fully reliable," she said.

"It gets frustrating when you get stopped by not having a elevator at an 'L' station [Wicker Park's newly renovated Damen "L" stop, lacks an elevator] or if a bus driver says the [step] lift doesn't work," Garcia said.

According to the rules of the competition, the medallion must be used for a new wheelchair-accessible taxicab for at least 10 years.

Tuffs, who has been driving a cab for nearly four years in Chicago and several years in the suburbs before that, said he plans to continuing serving passengers who need a specialized lift.

"I like the flexibility, variety of my job. It's not monotonous. I'm not stuck in a cubicle. I'm out here in the world," Tuffs said while driving on Michigan Avenue, headed to his next pickup. 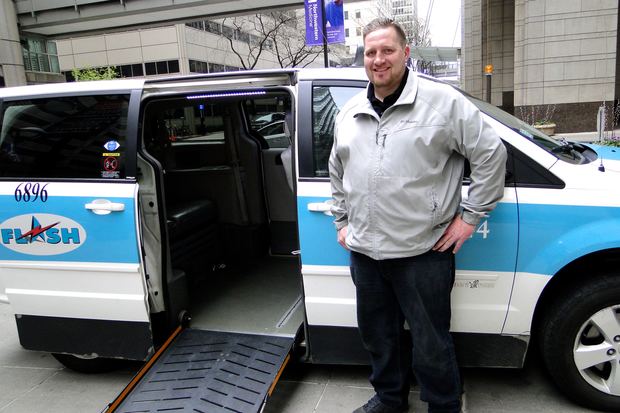 David Tuffs in front of his cab (DNAinfo/Alisa Hauser)