NAVY PIER — It took Michelangelo four years to paint the Sistine Chapel, a 130-foot-long masterpiece depicting the Biblical beginning and ends of time.

Down at Navy Pier, a local artist has his own epic undertaking: a 100-foot-long tribute to the people he sees at the state's largest tourist attraction.

Pete Nawara, 36, of Logan Square has been hard at work since early March painting "Pier People," a massive mural that will welcome guests to Navy Pier's new food court with a cornucopia of pier visitors and entertainers. The project is by far Nawara's biggest commission to date, even if it's not the next Sistine Chapel.

"I wouldn't put myself on that Michelangelo level, and luckily I'm not lying on my back doing it," Nawara said.

Still, "Pier People" is taxing work. Nawara and his friend helping out, Michael Pasier, have taken 10,000 photos of people at Navy Pier, many of them entertainers at the "Neighborhoods of the World" series in the pier's Crystal Gardens. Nawara then takes his favorite photos and hand-paints them onto the wall that is his canvas. 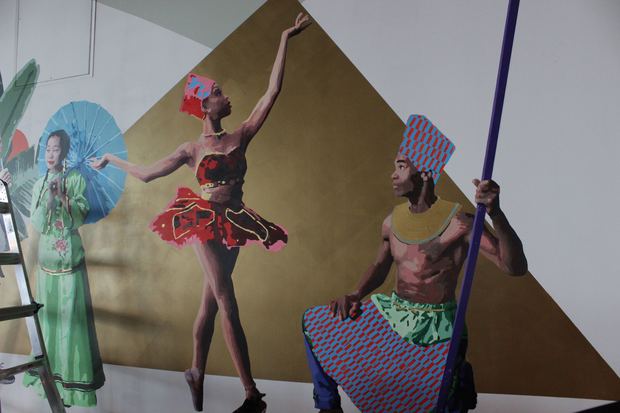 It's a process that has consumed Nawara and Pasier all day, six days a week, for more than a month, and they're still not close to finished. That's OK to Nawara, a graduate of the Parsons Paris School of Art & Design, who hopes to finish the mural this spring but has no timetable.

"It's a bit of a precious project to me," he said. "It's quite an honor. They're really trying to transform this place."

The mural is just one part of Navy Pier's $278 million bet it can evolve beyond what many Chicagoans consider a tourist trap. With its 100th anniversary approaching next year, the pier is cutting big checks to expand its children's museum, add more restaurants and build a boutique hotel.

Nawara mostly works during pier hours, and visitors often stop by to see the mural take shape and offer thoughts. Lisa Janes, a downstate Dixon resident who was visiting Navy Pier with her family, said the mural is a nice touch to the new food court.

"It definitely adds to what they're trying to achieve," she said.

Nawara said the project is a departure from working in his usual "dungeon studio," and likewise welcomes the attention from people often accustomed to seeing finished pieces, not works in progress.

"One of my favorite things about this is giving people insight; showing people someone did this," he said. "They don't think about each brushstroke."